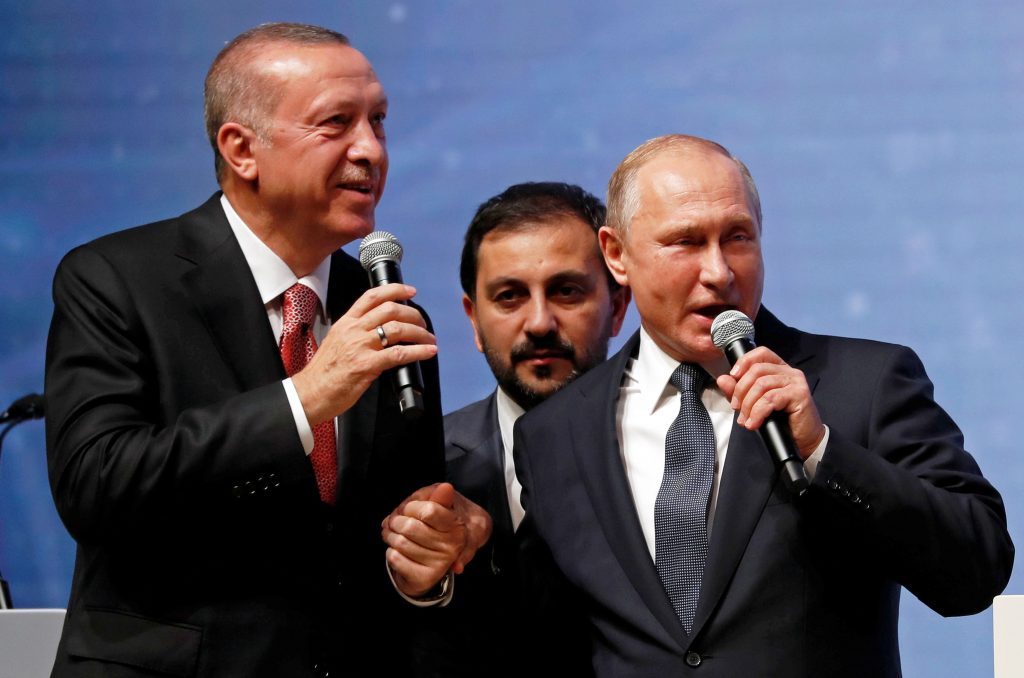 Turkish President Tayyip Erdogan and his Russian counterpart Vladimir Putin talk during a ceremony to mark the completion of the sea part of the TurkStream gas pipeline, in Istanbul, Turkey November 19, 2018. REUTERS/Murad Sezer

Energy politics are critical in Russia’s long war on the West and Ukraine. Indeed, energy functions as a Swiss army knife for Moscow, cutting simultaneously in several directions. Energy provides the basis for the revenue stream that enables all government operations, comprises a ready source of constant corruption of European elites and institutions, and furnishes an unending source of leverage and corruption over European governments and politics.

Russia’s war against Ukraine only heightens energy’s vital importance to Moscow in its overall European strategy.

Upon seizing Crimea, Moscow expropriated Ukraine’s energy platforms off Crimea’s coast. Likewise it is trying to make Ukraine economically dependent on Russia by building the Nord Stream II pipeline that will bypass the Baltic States, Belarus, Poland, and Ukraine and send gas to Germany, isolating Ukraine, and undermining support for Kyiv in Europe. This last point is not sufficiently understood abroad. Having bought up distribution networks in Germany, Moscow will have leverage over Germany and also on Germany’s supposed re-export of the gas from Nord Stream II to Central and Eastern Europe.

But the diabolical strategy does not end there. In 2019, TurkStream, Moscow’s gas pipeline to Turkey, is supposed to open. It will send gas to the Greco-Turkish border free of EU jurisdiction, and thence to Balkan, Italian, and Central European customers. As part of this strategy, Putin is traveling the Balkans and, like he did a decade ago, selling the same horse twice. Essentially, he is promising every Balkan capital that it will be a hub for TurkStream gas. But if everybody is a hub, then nobody is. Then Moscow, aided by its Balkan clients, will dominate the scene in Eastern Europe and intensify its efforts to prevent European integration in all its forms. Those forms include NATO enlargement in the Balkans and by extension Ukraine’s integration with Europe (since the gas should have flowed through Ukraine). At the same time, Moscow will have gained added means for corrupting these governments and societies and utilizing that influence to prevent support for Ukraine and its European integration.

But beyond those pipelines, we see a third dimension of this strategy operating through Hungary. Viktor Orban’s Hungary has morphed into a clone of Vladimir Putin’s Russia. Its efforts to undermine Ukraine by raising old irredentist issues concerning western Ukraine indicate its support for Moscow and its reversion to the irredentist policies of Hungary after 1919 when authoritarian leader Admiral Miklos Horthy ruled. Just as Horthy became a pawn of Hitler, Orban, in consolidating his strongman rule, is becoming Putin’s pawn. Politically he challenges Ukraine’s territorial integrity. And economically he has allowed Russia to gain control over Hungary’s energy sources and use its own means to penetrate Hungary’s economy and politics. Because Hungary’s energy company, MOL, is a major owner of Croatia’s INA energy company, Moscow’s rising presence in Hungary translates into a major presence in Croatia as well. Croatia is an essential link in the Balkans and thus to the extent that Moscow can influence Balkan energy trends, overall economics and politics, it isolates Ukraine from what would otherwise be natural ties to its Balkan neighbors and enhances its own leverage there. At the same time, it retards the Balkans’ ongoing integration with Europe.

Since 2009, Russia has sought to gain leverage in all Balkan energy networks. In 2009, Hungary’s energy company MOL invested in Croatia’s largest energy country, INA, thus excluding Rosneft and Gazprom. Moscow retaliated by claiming that the contract was won through bribery. Moscow is still trying to buy into INA by undercutting MOL in return for which Orban has ceded control over Hungarian energy to Russia. Also in 2009, the Russian oil and gas company Surgutneft bought 21 percent of MOL from Austria’s OMV energy company at nearly twice its market valuation, signifying the political implications of the deal. Since then, and particularly since 2013 when the Croatian government announced its intention to reduce its equity in INA, Russia, Gazprom, Rosneft, and the Russian government have both courted and pressured Zagreb and MOL to sell them shares in Croatia’s refineries and energy network that would allow it to gain at least a blocking voice against MOL and the Croatian government if not a dominant role in the Balkans and through that in energy transmission to Austria and Italy.

The implications of such machinations are easy to discern. Given the current chaos in the EU and transatlantic relations in general, Moscow might well succeed if not countered in isolating Ukraine through Nord Stream II, TurkStream, and gaining enduring influence across the Balkans. Ukraine and European security face not only military threats but also unrelenting energy threats. There is no clear Western strategy in sight to meet either as we enter 2019.