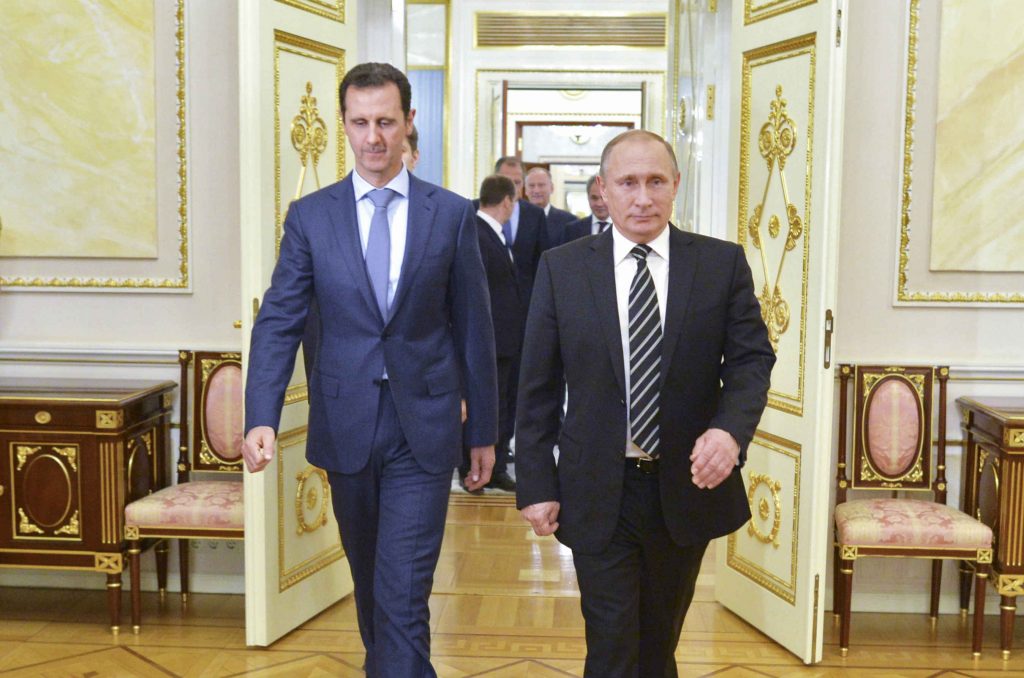 Russian President Vladimir Putin and Syrian President Bashar al-Assad enter a hall during a meeting at the Kremlin in Moscow, Russia, October 20, 2015. Assad made a surprise visit to Moscow to thank Putin for launching air strikes against Islamist militants in Syria. REUTERS/Alexei Druzhinin/RIA Novosti/Kremlin

To the great British military analyst Basil Liddell-Hart, it was axiomatic that the purpose of war was a better peace. In other words, for military operations to be successful, they must be correlated with political outcomes and strategic gains. Unfortunately, the idea that the United States can successfully employ military power to achieve clear political objectives seems to be lost upon both the Obama administration and Washington’s pundits.

Whatever defects Russia and its armed forces have, this disdain for strategy is not one of them. Washington’s elites, with a few exceptions, cannot accept that Russian President Vladimir Putin thinks and acts strategically. As of October 28, Putin has been conducting a tutorial in Syria on how the limited application of force can achieve concrete political objectives—that is, Liddell-Hart’s better peace.

Thanks to Russia’s intervention, the administration has been pushed to sign an agreement with Russia to “deconflict” the two governments’ aerial operations over Syria, and the US’ own sortie rate has diminished considerably as a result of Moscow’s deployment of air forces in Syria. General Joseph Dunford, Chairman of the Joint Chiefs of Staff, recently testified that thanks to the insertion of Russian and Iranian forces in Syria, Assad’s position has become stronger, even though the Russo-Syrian-Iranian offensive on Aleppo has not made much progress, and Moscow’s aircraft cannot match US forces and may be encountering technical difficulties.

Most tellingly, the United States has invited Iran to participate as a legitimate player in negotiations on Syria’s future, once again conceding its own “red lines” and those of its allies.

The explanations that the administration has given—that no military victory is possible, that Putin will make the same mistakes the United States made, that he will own the Syrian quagmire, or that he will find himself trapped in Syria as the United States found itself trapped in Iraq—are all elegant evasions of fact and justifications for the administration’s failure of will and intelligence. All of these statements serve merely as rationalizations for the US’ abdication of power in the Middle East, much like its actions in Ukraine. And they all stem from the refusal of US elites to take Russia—its interests, capabilities, demands, and threats—seriously.

It is this abiding cluelessness about Russia and strategy in general that leads many European diplomats and pundits to openly admit that they fear the United States neither understands Russia and Putin nor is capable of acting strategically in defense of its interests and allies. This growing sense of abandonment is surely one reason Jordan and Israel have made their own arrangements with Moscow, and why many Europeans still fear being exposed to Russian threats with no certainty of allied support.

This essay is not a paean to Putin’s abilities as a strategist. Clearly, he has made grievous mistakes in Ukraine, overestimating the extent of popular support for Russia in the Donbas and underestimating the West’s ability to impose and sustain long-term sanctions on Russia. But it is important to acknowledge that he is a strategist, or is at least attempting to think and act strategically—and according to a Russian, not an American, calculus.

The disdain expressed by the administration for Putin and Russia overall conceals a failure to grasp the urgency of thinking seriously about Russia, and an abdication of our commitments to our allies. Putin may ultimately lose his game in Syria, because nothing is as unpredictable as war. But that possibility cannot justify the complacency, arrogance, and intellectual laziness that threaten US interests and allies. Unfortunately, what is a better peace for Putin is a worse one for Europe and the Middle East.