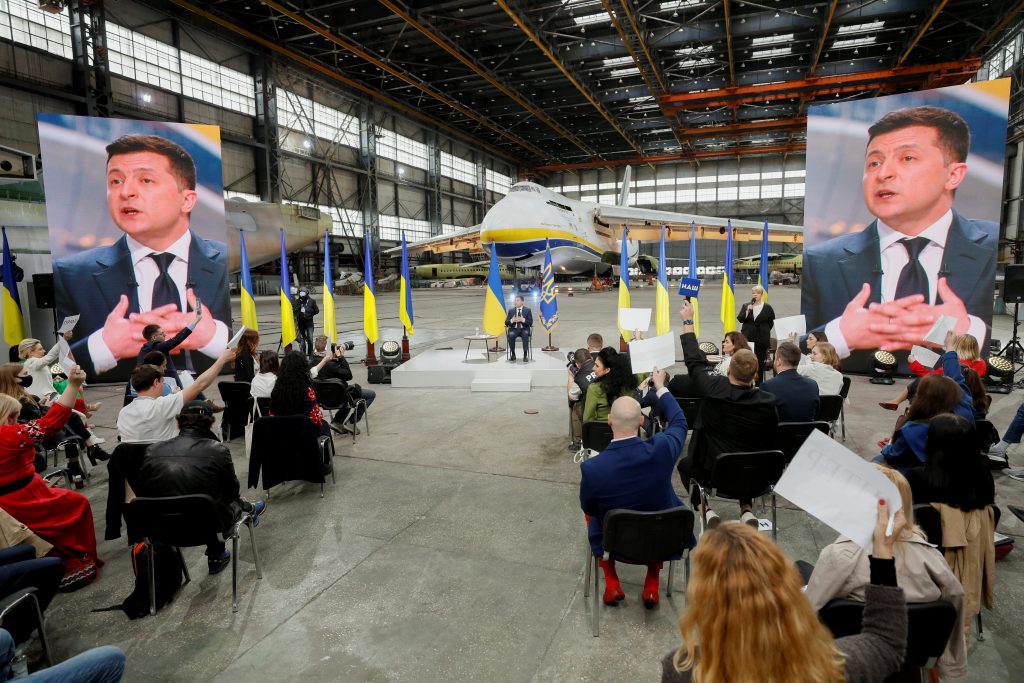 As Vladimir Putin’s hybrid war against Ukraine grinds into its eighth year, Russian passports are emerging as Moscow’s most effective weapon. On May 20, Ukrainian President Volodymyr Zelenskyy raised the alarm over the mass distribution of Russian passports in occupied eastern Ukraine and accused Moscow of paving the way for a possible annexation attempt.

Speaking during a landmark press conference at the Antonov plant in Kyiv to mark his first two years as president, Zelenskyy noted the alarming similarities between the current situation in eastern Ukraine’s Kremlin-controlled separatist republics and Moscow’s actions in Crimea prior to the 2014 Russian takeover of the Ukrainian peninsula. “This [passport distribution] is definitely the first step, because the same thing happened earlier in Crimea. Crimean residents were given Russian passports [prior to annexation]. This is a big problem,” the Ukrainian leader stated.

Zelenskyy’s comments echo claims made in a recent European Union report that was distributed among member states in early May. The EU document warned that the Kremlin is seeking to “de facto integrate” occupied eastern Ukraine into Russia, and specifically highlighted the dangers posed by Moscow’s passport distribution activities.

It was perhaps inevitable that the topic of Russian passports would emerge as a key theme during Thursday’s press event dedicated to Zelenskyy’s second anniversary in office. Russia’s weaponization of citizenship in eastern Ukraine has loomed over the Zelenskyy presidency ever since the Kremlin’s new passport distribution policy was first announced just days after his landslide election victory in April 2019. At the time, it was widely interpreted as a snub to Ukraine’s new president and a signal that Russia had little interest in Zelenskyy’s optimistic campaign trail talk of a compromise peace between the two countries.

Kremlin officials claim that since spring 2019, they have issued over 530,000 passports to Ukrainians resident in the occupied regions of Ukraine’s Donetsk and Luhansk oblasts. Viktor Vodolatsky, who serves as Deputy Chairman of Russia’s State Duma Committee for CIS Affairs, Eurasian Integration, and Relations with Compatriots, stated in late April that plans are in place to almost double this figure and reach a total of one million passport holders by the end of 2021. Ukrainian officials claim that many Ukrainians resident in the occupied regions are being forced to accept Russian citizenship in order to secure employment or gain access to basic public services.

Critics of Russia’s passport ploy say it makes a mockery of Moscow’s commitments to support the peaceful settlement of the conflict in eastern Ukraine and the eventual return of the occupied regions to Ukrainian rule. Furthermore, they argue that past experience of similar Russian tactics elsewhere in the post-Soviet space provides a clear indication of the Kremlin’s hostile intent.

Since the 1991 collapse of the USSR, Moscow has repeatedly used passports as a tool to maintain its influence in newly independent states throughout the former Soviet Empire. The most prominent examples have come in Moldova and Georgia, where Russia has distributed passports in order to fan the flames of separatism and justify a continued Kremlin presence.

As President Zelenskyy noted this week, the widespread issuance of Russian passports foreshadowed Moscow’s spring 2014 seizure of Crimea. It is entirely reasonable, therefore, to assume that Russia may now have similar plans for the regions of eastern Ukraine that are currently under unofficial Kremlin control.

Even if Russia is not preparing the ground for a Crimea-style annexation, the presence of so many Russian citizens in occupied eastern Ukraine will make it extremely difficult for the Ukrainian authorities to reestablish sovereignty over the region in the years ahead. By transforming the so-called separatist republics into Russian passport protectorates, Moscow is creating an open-ended excuse to intervene. This should be sufficient to extend the current occupation indefinitely without actually requiring the formality of an official annexation.

Kremlin officials have made little attempt to disguise the intended role of these newly minted Russian citizens in Moscow’s ongoing imperial aggression against Ukraine. During the recent spike in tensions caused by Russia’s saber-rattling troop buildup close to the Ukrainian border, a number of senior Putin regime figures openly entertained the possibility of a Russian offensive to protect the rapidly expanding number of Russian passport holders in occupied eastern Ukraine. Speaking in Moscow on April 8, Putin’s deputy chief of staff Dmitry Kozak warned that the Russian military “would be forced to come to the defense” of Russian citizens in Ukraine if the security situation were to deteriorate.

Russia’s exploitation of passports to cement its grip on eastern Ukraine is the clearest indication so far of Moscow’s intention to pursue a long-term policy of hostility towards Ukrainian statehood. A campaign of international aggression that began seven years ago with Russian soldiers in Crimea posing as Ukrainian civilians is now being increasingly shaped by the transformation of Ukrainian citizens into Russian passport holders.

This week’s comments by President Zelenskyy and the EU’s recent report may help to draw international attention to the issue of weaponized Russian citizenship. However, until Putin faces some kind of concrete costs for his efforts to manufacture an artificial Russian population in neighboring Ukraine, he is unlikely to change tack. Instead, the number of Russian passport holders will continue to grow and Ukraine’s occupied east will remain a destabilizing factor in the geopolitics of the wider region.

Image: Ukrainian President Volodymyr Zelenskyy addresses journalists during a May 20 press conference to mark the second anniversary of his presidency. (REUTERS/Gleb Garanich)