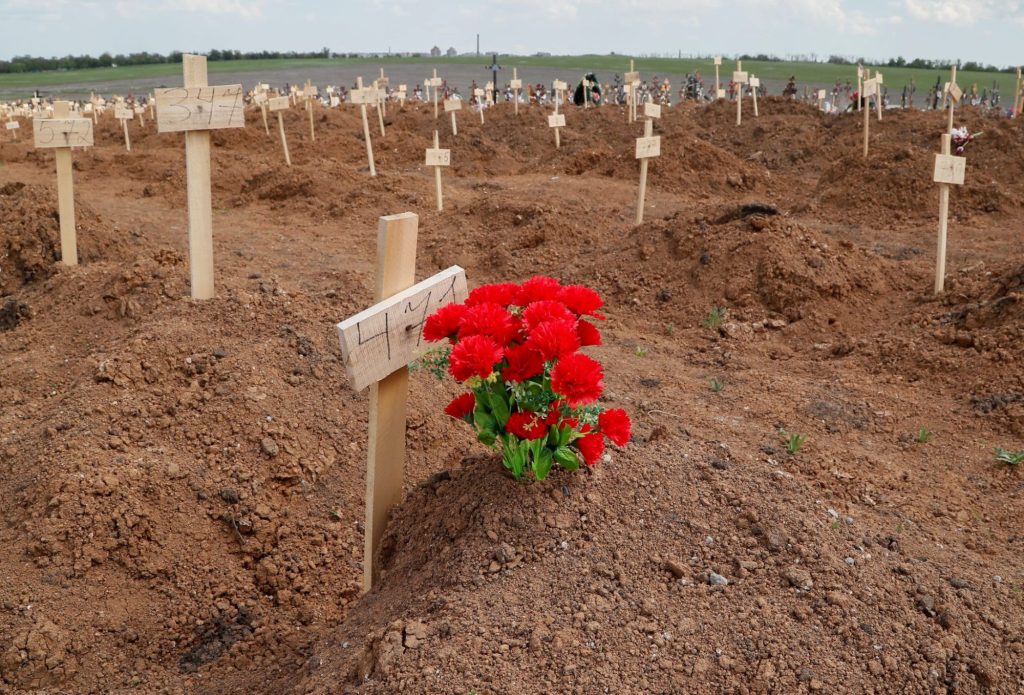 In summer 1941, as the outside world first began to learn of the mass murders accompanying the Nazi invasion of the Soviet Union, British Prime Minister Winston Churchill memorably declared, “We are in the presence of a crime without a name.”

This is no longer the case. In 1948, the United Nations adopted the Genocide Convention based in large part on the visionary efforts of Raphael Lemkin, a lawyer who studied in Lviv and went on to coin the term “genocide.” Lemkin was driven by the idea that crimes committed on the national scale must not go unpunished. He warned that impunity would be seen as an invitation for further atrocities. Unless crimes against humanity were punished, they would be repeated.

When seeking to define genocide, Lemkin highlighted the crimes committed by the Soviet regime in Ukraine. He saw the Kremlin’s systematic efforts to destroy the Ukrainian nation as a “classic example of Soviet genocide.” The central event of the Soviet Union’s genocidal campaign in Ukraine was the murder of over four million Ukrainians through artificial famine in the early 1930s.

The Soviet authorities experienced almost no negative consequences as a result of this unparalleled slaughter. Indeed, just months after the peak of the famine, the United States granted the USSR official recognition. The outside world simply refused to listen to the handful of courageous voices such as British journalist Gareth Jones who attempted to shed light on the apocalyptic reality of the famine.

Instead of being celebrated for his revelations, Jones was shamefully attacked by his fellow international correspondents. The loudest voice was that of Walter Duranty, the Moscow bureau chief of the New York Times. It says much about how little has been learned that this disgraced genocide accomplice still holds a Pulitzer Prize despite calls for him to be posthumously stripped of the award.

Since regaining independence in 1991, Ukrainians have thrown off the shackles of Soviet censorship and chronicled the full extent of the Holodomor (“Death by Hunger”), as the famine is known in Ukraine. During the post-Soviet era, growing awareness of the Holodomor has been instrumental in bringing about a broader re-evaluation of the country’s totalitarian past.

The same cannot be said for modern Russia. Far from acknowledging the famine as an act of genocide, Moscow continues to downplay or deny Soviet crimes against humanity. Meanwhile, Russian President Vladimir Putin has sought to rehabilitate the entire Soviet era and has built modern Russian national identity around a cult-like veneration of the USSR’s role in the defeat of Nazi Germany. Attempts to condemn the mass murders of the Soviet regime are now routinely dismissed as unpatriotic and anti-Russian, while Stalin himself is once again openly celebrated as a great leader.

Given the complete failure to hold Russia accountable for the crimes of the past, it is hardly surprising that these crimes are now being repeated. As Lemkin feared, impunity has set the stage for a new era of atrocities.

The ideological foundations for today’s genocide were first laid in the wake of Ukraine’s 2004 Orange Revolution. This Ukrainian pro-democracy uprising was a watershed moment for the entire post-Soviet region. It was viewed with horror by many in Moscow, who saw it as the next stage in a Russian imperial retreat that began with the fall of the Berlin Wall in 1989.

Putin’s response was to enter into increasingly open confrontation with the West while seeking to reassert Russian authority throughout the post-Soviet region. In the years following the Orange Revolution, the Kremlin developed the concept of the “Russkiy Mir” (“Russian World”), meaning a community of people beyond the borders of modern Russia bound by common ties of language, culture and religion who owe their allegiance to Moscow.

As the concept of the Russian World evolved, state officials and regime proxies in Moscow began to directly question the legitimacy of the Soviet collapse and challenge the verdict of 1991. It became increasingly common to hear prominent figures publicly deny the sovereignty and national identity of former Soviet republics or reject the entire notion of an independent Ukraine.

This unashamedly imperial agenda was actively promoted for over a decade throughout the Russian information space via everything from blockbuster movies and TV documentaries to opinion pieces and public holidays. Kremlin troll factories seeded social media with revisionist historical narratives justifying Russian expansionism, while an endless parade of Kremlin-curated political talk shows primed the Russian public for the coming genocide.

A major landmark in these efforts came in summer 2021 with the publication of Putin’s personal essay “On the Historical Unity of Russians and Ukrainians.” This historically illiterate 5000-word treatise was widely interpreted as a declaration of war against Ukrainian statehood. The Russian dictator used the article to reiterate his frequently voiced conviction that Russians and Ukrainians are “one people” while also claiming that much of modern-day Ukraine occupies historically Russian lands. He concluded with a thinly veiled threat, declaring, “I am confident that true sovereignty of Ukraine is possible only in partnership with Russia.”

Despite these very public preparations for genocide, few observers were prepared for the atrocities that would come in the wake of Russia’s February 2022 invasion. In the weeks leading up to the invasion, reports emerged of detailed Russian plans for mass detentions, concentration camps, and priority kill lists. These warnings were widely dismissed as inconceivable but were to prove all too accurate.

The scale of Russia’s crimes over the past six months remains difficult to comprehend. Entire cities have been reduced to rubble. Thousands have been executed. Millions have been forcibly deported to Russia. The core infrastructure of the Ukrainian state has been methodically targeted for destruction, along with the country’s cultural heritage. In areas under Russian occupation, all national symbols and traces of Ukrainian identity are being eradicated. The entire world is witnessing a textbook example of genocide unfolding in real time on smartphone screens and social media threads.

A sense of shock over the magnitude of Russian atrocities is understandable. However, it is also important to note that recognizable elements of the current genocide have already been underway for an extended period in regions of Ukraine occupied by Russia since 2014. Over the past eight years, Crimea and eastern Ukraine’s Donbas region have become human rights black holes marked by the suppression of Ukrainian identity, language, and history along with the physical displacement of Ukrainians and arrival of Russian citizens. Once again, impunity has invited escalation.

The world is slowly waking up to Russian genocide in Ukraine. Parliaments in countries including Canada, the Czech Republic, Estonia, Ireland, Latvia, Lithuania, and Poland have all recognized the Russian invasion as an act of genocide. Others are expected to follow suit. At the same time, there is still considerable international reluctance to confront Putin’s Russia. Advocates of appeasement point to Moscow’s nuclear arsenal and highlight the need to maintain a dialogue with the Kremlin in order to address a range of global issues. Russia is simply too big and too important to isolate, they argue.

This emphasis on compromise over confrontation risks further eroding international security. If Moscow is able to evade justice for committing genocide in Ukraine, other authoritarian regimes will surely see this as a green light. China in particular is closely monitoring the democratic world’s response to Russia’s invasion and will draw the necessary conclusions for its own foreign policy.

It is now painfully clear that failure to hold the USSR accountable in 1991 was a major error. A Nuremburg-style trial exposing the crimes of the Soviet era could have helped facilitate the post-Soviet transition to democracy and prevented Russia’s return to authoritarianism under Putin.

This makes it all the more imperative that Vladimir Putin and his accomplices now face justice. Even if they remain in power and beyond the reach of international law, there is nothing to stop the civilized world from holding a trial in absentia. Such an undertaking would send a clear message to the Russian people and to authoritarian regimes around the world that the age of impunity for crimes against humanity is over.

Genocide is no longer a crime without a name. On the contrary, the global community officially recognizes genocide as the gravest of all crimes. Nevertheless, this has not prevented today’s Russia from plotting and conducting a genocidal invasion in plain sight. Moscow’s boldness owes much to the sense of impunity engendered by a complete lack of accountability for the crimes of the Soviet regime. The world cannot afford to make the same mistake again.

Alexander Khara is a fellow at the Centre for Defence Strategies.

Image: A view shows newly-made graves at a cemetery outside Mariupol, Ukraine May 15, 2022. (REUTERS/Alexander Ermochenko)