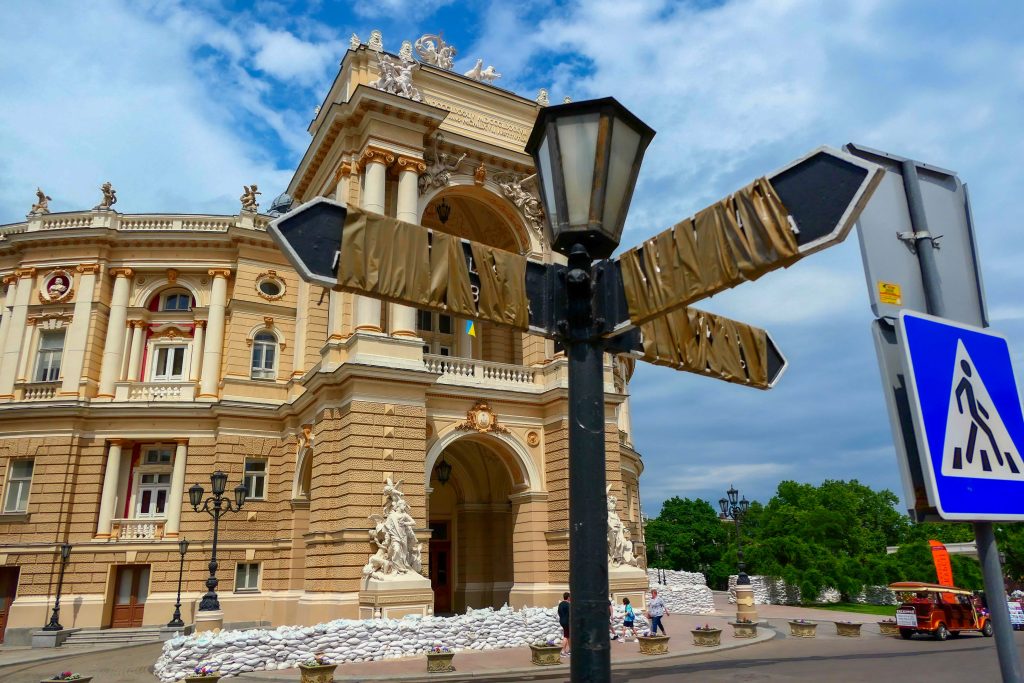 Vladimir Putin has long claimed to be the champion of pro-Russian Ukrainians. However, it is now painfully apparent that the Ukrainian regions most closely associated with pro-Kremlin sentiment have also been hardest hit by the current invasion.

Since the war began four months ago, Putin’s invasion force has killed thousands of the Russian-speaking and ethnic Russian Ukrainians they claim to be protecting. The Russian military has also reduced multiple largely Russian-speaking Ukrainian towns and cities to rubble. Unsurprisingly, the unfolding carnage has forced a radical rethink of attitudes toward Russia and transformed many previously sympathetic Ukrainians into bitter opponents of the Kremlin. This historic shift is nowhere more immediately apparent than in Black Sea port city Odesa.

While Putin believes he has an historic right to the whole of Ukraine, Odesa has always occupied a particularly special place in the Russian imagination. For much of the late czarist period, Odesa was known as the southern capital of the Russian Empire. It would remain deeply embedded in Russian national identity throughout the Soviet era. Odesa was celebrated across the USSR for its unique sense of humor and colorful criminal underworld. The city was renowned for its associations with giants of Russian history such as Grigory Potemkin and Russian literary legends ranging from Pushkin to Isaac Babel.

Many in Odesa shared this sense of close cultural affinity with Russia. Following the collapse of the Soviet Union, pro-Russian sentiment remained strong in Odesa while notions of Ukrainian patriotism often struggled to take root. Pro-Kremlin parties tended to dominate the local political scene while Moscow-friendly initiatives such as recognizing Russian as Ukraine’s second state language enjoyed widespread public backing.

At the same time, there was relatively little appetite in Odesa for an actual Russian reunion. While a majority of Odesans favored strong ties between Ukraine and Russia and saw the two countries as closely related, only a minority of residents wanted to separate from Ukraine or become part of modern Russia. Instead, local identity tended to dominate over issues of citizenship, with many Odesa residents preferring to see their nationality as “Odesan” rather than Ukrainian or Russian. This typically whimsical take on the nationality debate captured the essence of identity politics in post-Soviet Odesa but proved too nuanced for the Kremlin.

During the buildup to the February 2022 invasion, Putin appears to have convinced himself that Odesa and other traditionally Russophile Ukrainian cities throughout the south and east of the country were secretly waiting for liberation and would welcome his army with cakes and flowers. This catastrophic miscalculation has sparked the largest European conflict since WWII and done much to shatter the generational ties that once bound Russia and Ukraine so closely together.

Prior to 2014, Odesans overwhelmingly expressed positive attitudes toward Russia. Meanwhile, surveys consistently identified majority backing for some form of customs union with Russia and other former Soviet states. Meanwhile, relatively few in the Black Sea port city favored EU membership. A poll conducted by the Kyiv International Institute of Sociology in February 2014 during the climatic weeks of Ukraine’s Euromaidan Revolution found that 24% of Odesans wanted to see Ukraine join the Russian Federation, representing one of the highest percentages in the entire country.

Even as Russia waged a localized war in eastern Ukraine from spring 2014, positive perceptions of Odesa’s Russian heritage continued to translate into strong support for Moscow-leaning politicians. However, everything changed on February 24, 2022.

Russia’s full-scale invasion of Ukraine has devastated the country and caused untold suffering. Tens of thousands have been killed during the first four months of the war, with millions more forced to flee their homes. Meanwhile, the Kremlin has embarked on the systematic destruction of the Ukrainian economy. Factories, shopping centers and vital infrastructure have been targeted with airstrikes, while Odesa’s ports have been blockaded in order to cut off Ukraine’s economic lifeline to global markets.

Odesa has not yet found itself on the frontlines of the fighting but it has suffered numerous airstrikes. Since February, it has become a fortress city prepared to defend itself against Russian assault from both land and sea.

Odesans are now under no illusion that they face a fight for survival. Other predominantly Russian-speaking Ukrainian cities with similarly strong historical links to Russia have been shown no mercy. Instead, they have been subjected to brutal bombardment and in many cases wiped off the face of the earth. Ukraine’s second-largest seaport after Odesa, Mariupol, has been almost completely destroyed with more than twenty thousand civilians feared dead. Many of the victims were ethnic Russians. Few doubt that Odesa will suffer a similar fate if Russian troops are able to advance on the city.

The genocidal savagery of Putin’s invasion has had a profound impact on Odesan attitudes toward Russia while also dramatically strengthening Ukrainian identity in the city. A survey conducted in June 2022 by Ukrainian pollster SOCIS captured the historic shifts taking place in Odesa. It found that 78% of Odesa residents expressed pride in Ukrainian identity. At the same time, 88% noted a major deterioration in their assessment of Russia’s leaders and 80% cited a sharp decline in feelings toward Russians in general. Odesa’s dramatic turn away from Russia over the past four months has been mirrored throughout Ukraine’s most traditionally pro-Kremlin regions.

Many observers argue that Putin’s invasion has unraveled on the battlefield. They typically point to Russia’s landmark defeat in the Battle for Kyiv and the failure to capture Kharkiv. These military setbacks should certainly not be underestimated. Nor should today’s modest Russian advances at great cost in eastern Ukraine be seen as repairing the damage done by the earlier failures of Putin’s invasion force. Nevertheless, the Russian dictator’s most meaningful defeat has surely come in the battle for hearts and minds.

By unleashing a war of annihilation, Putin has irreparably alienated millions of Ukrainians who were previously sympathetic to the idea of closer ties with Russia. This is a strategic catastrophe for the Russian nation that has reversed centuries of imperial expansion. It has transformed the geopolitical landscape entirely and destroyed any hope of a pro-Russian government emerging in Ukraine for decades to come.

Putin dreamed of securing his position in history as the founder of a new Russian Empire. Instead, he has doomed himself to a legacy of historic failure and a place in infamy as one of the worst war criminals of the twenty-first century.

Image: The names of the streets are concealed with adhesive tape outside the Odesa National Academic Opera and Ballet Theater. June 2022. (Yulii Zozulia via Reuters Connect)