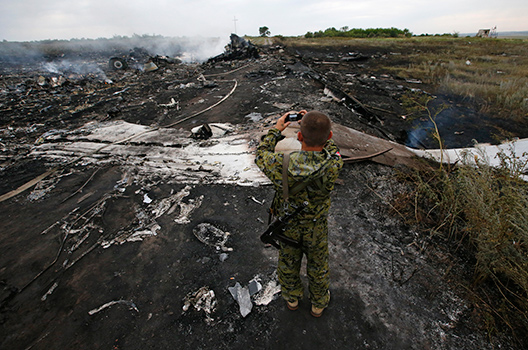 The Kremlin’s thin veil concealing its waging of war against Ukraine effectively disappeared weeks ago for anyone carefully watching the evidence. But now it has vanished even for the casual observer. Moscow’s escalation of the war since the start of July has created too much clear evidence to permit President Vladimir Putin any further benefit of the doubt.

And this is the case no matter what turns out to have shot down the Malaysian airliner over Ukraine today.

The new evidence of the past two weeks includes:

If we care at all about the truth in this war, we need to pay attention to this. That takes more time than we may have to write or read just this moment, so we’ll be coming back to the issue. But for now, consider just these three:

RUSSIA’S ROCKET ATTACKS ON UKRAINE.
In the 21st-century world of cellphones everywhere, you can’t put rocket launchers in a densely populated area and fire thunderous volleys of rockets arcing through the sky without a lot of folks pulling out their phones to shoot the video and post it online for their friends. And around the southern Russian town of Gukovo, less than two miles from the border with Ukraine, that’s exactly what lots of Russians did this week.

Enough of them did it that journalists at the investigative website Interpreter were able to cross-reference them, and to use Google Maps imagery to clearly locate the missile battery north of the town. View and read the results on Interpreter and in a separate article by its editor, Michael Weiss.

THE SHOOTDOWNS OF TWO UKRAINIAN AIRCRAFT AT ALTITUDES REACHABLE ONLY BY RUSSIA.
The Ukrainian government reported Monday its loss of a military transport plane flying above 20,000 feet – beyond the range of the (Russian) shoulder-fired missiles deployed by the insurgent militias in Ukraine. Ukraine’s government says only a Russian missile fired by Russia could have brought it down. A Ukrainian fighter jet was shot down Wednesday and Ukraine says it was done by a Russian warplane. Now, it’s possible – even likely – that Ukraine may be asserting more than it actually knows. But unless we think that Kyiv is shooting down its own aircraft from high altitude to make Moscow look bad, these attacks – especially when joined to the pattern of armor and artillery strikes from Russian territory – force a serious question of proof and credibility upon Putin’s government.

THE OPEN DISPATCH OF A SENIOR RUSSIAN KGB OFFICER TO HELP ESCALATE THE WAR.
Read Irena Chalupa’s illuminating article on Viktor Antyufeyev, perhaps Russia’s most experienced officer at the secret-police and special-forces arts of running Kremlin-backed pretend states such as the “people’s republics” that President Vladimir Putin’s government is trying to set up in the Donbas region of southeast Ukraine. Antyufeyev spent twenty years running the KGB of Transnistria, the proto-state Russia sponsors in Moldova, and he showed up in Donetsk a few days ago to start doing the same there. The Russians who now direct the Donbas insurgency are largely resident in Moscow and largely career officers of the Russian security establishment. The Kremlin can rightly protest that these men have not been shown to be on active duty – that they may be acting on their own.

But the presence of Antyufeyev and Russian former intelligence Colonel Igor Girkin, among others – taken all together with this month’s armored invasions, aerial missile attacks and artillery rocket bombardments from Russia into Ukraine – shifts the burden of proof to Russia: Show us how this does not amount to war.

Image: An armed pro-Russian separatist takes pictures at the site of a Malaysia Airlines Boeing 777 plane crash near the settlement of Grabovo in Donetsk province, July 17, 2014. PHOTO: REUTERS/Maxim Zmeyev