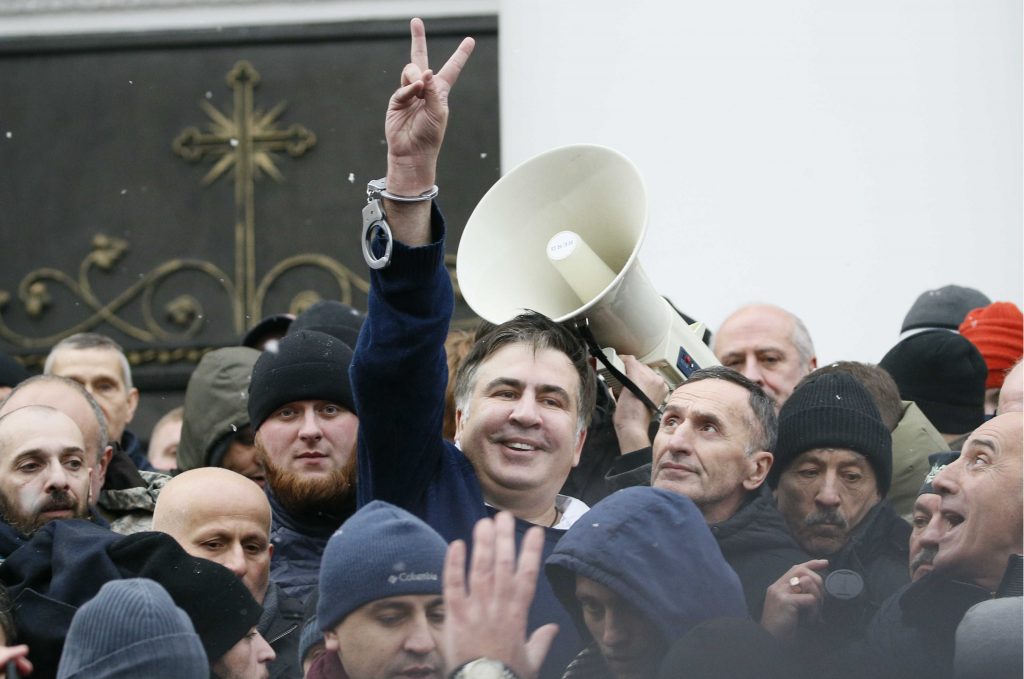 Former Georgian President and Odesa oblast governor Mikheil Saakashvili was taken into custody in Kyiv on December 5. His supporters eventually freed him and he addressed a large crowd outside of the parliament. Later in the day, Prosecutor General Yuriy Lutsenko told parliament that Saakashvili accepted money from a fugitive oligarch to fund antigovernment protests that have waxed and waned since mid-October. The situation remains tense and ongoing. What does the detention of Saakashvili mean for Ukraine, its democratic prospects, and its relationship with the West? We asked our experts and a number of commentators and politicians to explain the significance of today’s events.

Michael Carpenter, former US Deputy Assistant Secretary of Defense and Senior Director at the Biden Center: The conflict between Saakashvili and the Ukrainian authorities only benefits Russia. Saakashvili entered Ukraine under dubious circumstances but his case needs to be adjudicated according to the rule of law, not through force.

Aivaras Abromavicius, former Ukrainian Minister of Economy and Trade: I think there has been a good amount of progress made by the last two governments. Yet many of those achievements are at risk of being eroded by the recent blunt attacks on the National Anticorruption Bureau of Ukraine by unreformed law enforcement agencies. In light of the total absence of sentencing of extremely corrupt current or former top officials, accusations against Saakashvili will always seem politically motivated. The West is going to be puzzled yet again and disappointed about where the priorities of Ukraine’s leadership lie.

Anders Åslund, Senior Fellow at the Atlantic Council: The most important aspect with the Saakashvili protests in Kyiv today is probably that he encountered a far greater popular response than in recent protests and that the focus of the protest has suddenly become the impeachment of President Petro Poroshenko. The apparent reason is that popular hopes for vital judicial reform have faded with the spectacular failure of appointing a clean Supreme Court, the official resistance against the formation of a new independent anticorruption court, and the coordinated government attack against the National Anticorruption Bureau of Ukraine. The activists have given up hope for the introduction of rule of law for now.

Peter Dickinson, Nonresident Fellow, Atlantic Council and Publisher of Business Ukraine: If we put the credibility of the charges themselves to one side, the handling of the arrest and subsequent mob release are a massive PR blow for President Petro Poroshenko, creating the duel negative perceptions of a heavy-handed and incompetent administration. This will leave many of Ukraine’s supporters in the West frustrated while fueling cynicism toward the country.

Maxim Eristavi, Nonresident Research Fellow at the Atlantic Council and Cofounder of Hromadske International: As much as the arrest of Saakashvili is captivating to watch, it shouldn’t distract us from the ongoing attack by the presidential administration on the National Anticorruption Bureau of Ukraine, the country’s only independent anticorruption body. What happened today is an obvious deflection tactic by Poroshenko and his subordinates at the security service and general prosecutor’s office. At the same time, it is a disturbing preview of what Poroshenko is willing to do to his opponents before the 2019 elections as he rapidly loses public support. There’s no right side in today’s mess. Both Poroshenko, bending the justice system for personal gain, and Saakashvili, undermining the legitimacy of law-enforcement, make Ukraine weaker.

John Herbst, Director of the Eurasia Center and former US Ambassador to Ukraine: The news today from Kyiv is distressing for all friends of Ukraine. Fighting Moscow’s aggression in Donbas, the country needs internal peace and reform. Leading politicians need to air their differences and grievances with civility and consistent with the national interests of the country. It is not easy to get to the bottom of the charges and countercharges swirling in Kyiv. But all politicians and parties should work to establish calm and should take no step that endangers domestic peace or reform.

Daria Kaleniuk, Executive Director of the Anticorruption Action Center: The Saakashvili debacle is generating massive headlines, and that was the point. It’s no coincidence that the prosecutor general’s office detained Saakashvili just as it is orchestrating a massive attack on the independence of the National Anticorruption Bureau of Ukraine. Prosecutor General Lutsenko wants to use Saakashvili’s case to distract attention away from the planned dismissal of NABU Director Artem Sytnyk, who has been summoned home from Washington for a closed hearing of the Rada on November 6. The authorities and a majority of parliamentarians plan to push out the NABU director in a no-confidence motion. Let’s hope the West is watching.

Adrian Karatnycky, Senior Fellow at the Atlantic Council: The sensational charges leveled against Mikheil Saakashvili by the Ukrainian procuracy have the potential to reshuffle the entire political deck in Ukraine. If the case is proved, then we are dealing with the fact that Saakashvili colluded with and took money from the exiled, Moscow-based criminal cohorts of former President Viktor Yanukovych.

This is an either or situation. Either Saakashvili was playing footsie with exiled members of the former Yanukovych team, or the Ukrainian procuracy and security services have perpetrated the fraud of the century and Saakashvili is an innocent victim of trumped-up charges not seen since the Stalin era.

Oksana Syroid, Deputy Speaker of Parliament, Samopomich Party: The attempt to arrest Saakashvili was followed by the prosecutor general’s emotional speech, which included a video that supposedly proves that a fugitive businessman with ties to Viktor Yanukovych funded Saakashvili’s antigovernment protests. Unfortunately, the whole situation has little to do with justice or liberal values. It demonstrates serious deficits in our state institutions, and shows that law enforcement agencies are ready to use disproportionate force but don’t have sufficient legitimacy to do so. Today Ukraine’s prosecution turned back to the Soviet ways of doing things. And the saddest part of this whole saga is that it enjoys the blessing of the president.

William Taylor: Vice President of the United States Institute of Peace and former US Ambassador to Ukraine: Ukraine is fighting two wars—against Russia and against corruption—and doesn’t need a third, against itself. The Ukrainian army is holding the Russians back; the Ukrainian people are demanding clean government; the politicians should allow regular elections to choose Ukrainian leaders.

Image: Georgian former President Mikheil Saakashvili flashes a victory sign after he was freed by his supporters in Kyiv, Ukraine December 5, 2017. REUTERS/Gleb Garanich