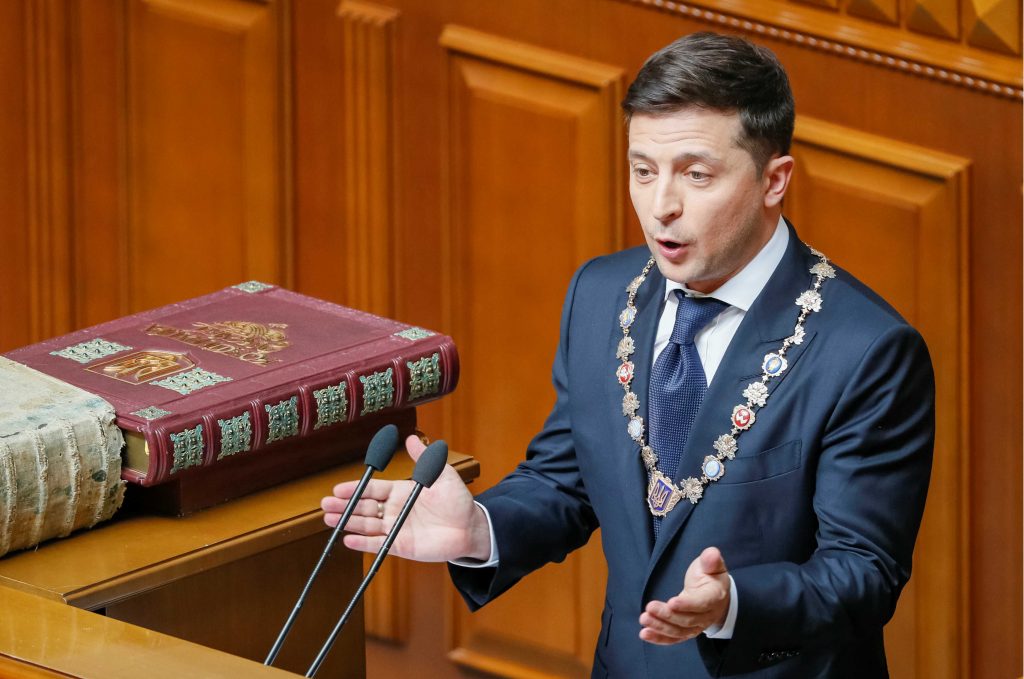 On May 20, Volodymyr Zelenskiy was sworn in as Ukraine’s sixth president. His inauguration speech was ambitious: he called for early elections, urged parliament to end parliamentary immunity, pass electoral reform and the law on illegal enrichment. He also wants parliament to sack the head of the SBU, the prosecutor general, and the minister of defense. What did you think of Zelenskiy’s speech? Did he strike the right tone? Are his priorities correct?

Anders Åslund, Senior Fellow at the Atlantic Council:  Zelenskiy’s inauguration speech was magnificent, punchy, clear, and short. He set the right priorities for the short term: early elections, the abolition of parliamentary immunity, new electoral law, and a new law on illicit enrichment. These issues must be on the immediate agenda to go through the Rada.

It should be self-evident that political appointees resign when a new president comes in, but Zelenskiy had to emphasize that. He was also wise to call for national unity, including the Donbas and Crimea.

This is undoubtedly the most memorable and consequential inaugural speech in Ukraine’s history, no small feat.

Michael Bociurkiw, international affairs expert and former spokesman to the OSCE Special Monitoring Mission in Ukraine: Zelenskiy left the gate galloping. He well knows that his extraordinarily large mandate has an expiration date – possibly even less than 100 days – and that he must deliver some key accomplishments while voter approval is still high. It’s a politically savvy move to go for the maximum while the election halo is still above him.

Zelensky hit all the key notes in this speech: bringing peace to the Donbas as his #1 priority, calling for early Rada elections, scrapping the immunity from prosecution for Rada members, and bringing economic relief to millions of struggling citizens. He is also signaling that he has the fire in his belly for a protracted fight with the Verkhovna Rada, which has among the lowest favorable ratings in the world. A brilliant stroke was offering Ukrainian citizenship to the millions of Ukrainians overseas who want to help rebuild Ukraine.

Brian Bonner, chief editor, Kyiv Post: These are absolutely the right priorities. However, now comes the hard part: Ukraine needs to see who he will surround himself with—people with great track records and reputations, or people with unsavory pasts or linked to such people. The four key appointments for me are prosecutor general, chief of staff, head of the SBU, and foreign minister. As for prime minister, I guess we won’t know until after the parliamentary elections. There are questions about the legality of the early parliamentary elections, although it’s clear Ukrainians want new faces in parliament, in the cabinet, and as prime minister.

Peter Dickinson, Nonresident Fellow at the Atlantic Council and Publisher, Business Ukraine Magazine: Zelenskiy came out fighting today. His speech sent a clear message that although he is an absolute beginner on the political stage, he is not willing to be pushed about. Instead, he will seek to cow any opposition with the sheer weight of his landslide majority. Zelenskiy’s call for early elections is likely to win favor with the electorate, which has already handed him an overwhelming mandate for change and has no great love for the current parliament. However, Ukraine’s new head of state risks alienating the entire political class with his sweeping and dismissive attacks on everything that has gone before him. This could make life difficult further down the road. Ultimately, he will find that he cannot rule effectively without forming political alliances. This will require a far more diplomatic approach, leading to the kind of compromises that will inevitably take some of the shine off Zelenskiy’s halo. Nevertheless, he will likely continue his “man of the people” posturing until late summer at least, when the horse-trading season will begin in earnest following the early parliamentary election.

Maxim Eristavi, nonresident fellow at the Atlantic Council and Ukrainian broadcast journalist: Zelenskiy’s inauguration speech shows that the president’s mind is in the right place, but he lacks a clear execution plan. Popular messages of unity, fighting corruption, ending the Donbas violence, and supporting economic growth were enveloped in amateurish wording and saved only by the president’s exceptional charisma. Most importantly, the speech lacked a specific policy vision. This represents the dire deficit of talents within Zelenskiy’s team after a surprising and meteoritic rise to victory. In this regard, I’m saddened to see that Ukrainian civil society keeps ghosting the new president after previously backing his predecessor Petro Poroshenko. Zelenskiy could use their help. For the first time in the country’s history, Ukrainian voters provided the new president with a record mandate for sweeping reforms —73 percent is a rare electoral victory in any democracy. It’s time to put the country first and help Zelenskiy get all available hands on deck in a push for painful reforms before his massive popularity inevitably dries up.

John Herbst, director of the Eurasia Center at the Atlantic Council and former US ambassador to Ukraine: Zelinskiy continues to surprise. His inauguration was no exception. Once he announced his candidacy for the presidency in late December, he became the front runner and went on to win handily in a stealth campaign. When Putin challenged President-Elect Zelinskiy by offering Ukrainians in Russian-occupied Donbas Russian passports, he put Putin on his heels by pointing out that those passports are tickets to a life with no democracy and few human rights. With his inaugural address, Zelinskiy issued a challenge to the Rada. He won a resounding victory in the presidential election and, while his popularity is still high, would like to hold parliamentary elections. So he called for the dissolution of the Rada in order to set early elections well before the currently scheduled date of October 27. Some parties in the Rada have tried to prevent early elections by dissolving the government coalition on May 17. Zelinskiy made clear in his address that he does not consider the coalition dissolution an obstacle to early elections. This means that the new president begins his term in office in a fight with major forces in the Rada.

Andy Hunder, president of the American Chamber of Commerce of Ukraine: It’s been quite a day here in Kyiv—a new president inaugurated, the disbanding of parliament, and prime minister’s resignation announced, all in under eight hours.

A key focus of Zelenskiy’s inauguration speech was a bold call for Ukrainians who live abroad to return home. Reverse brain drain—moving from more developed economies to a less developed one. If Zelenskiy manages to stop the outflow of human capital and entice millions of Ukrainians to come home, this will be a significant boost for the country’s economy.

Although he didn’t mention the word economy in his speech, with double elections in one year, the business community is anticipating that both Ukraine’s president and parliament will have five uninterrupted years to deliver continued reform and economic growth.

Basil Kalymon, Professor Emeritus at Ivey Business School, University of Western Ontario, Canada: My impression of Zelenskiy’s inaugural speech was most favorable. Zelenskiy showed a human face by linking the need for reform to one’s children and their future. It portrayed a deep feeling of sincerity and recognition of the greatest concerns of the citizens of Ukraine. His commitment to efforts to end the war in Donbas while strengthening support of the soldiers fighting for the country and ascertaining territorial integrity was most commendable. His initial measures required of the Rada, including the elimination of immunity, revised laws on illicit assets, and electoral reforms, are on target. Declaring the dissolution of the current Rada is a needed measure if a true reform coalition is to be established. Calling for the immediate removal of the prosecutor general, heads of police and defense are key moves toward the establishment of the rule of law and order. An impressive start which carries with it a heavy responsibility to live up to the ambitious goals espoused.

Hanna Shelest, editor, UA: Ukraine Analytica: The inaugural speech of the new president left a two-fold impression. On the one hand, he was trying to unite the Ukrainian people, stressing no differences, and talking about joint responsibility, peace, and the necessity to hear each Ukrainian. At the same time, it was a feeling that he is still campaigning, and he is still in a confrontational mood with the parliament and the government. If he wants them to adopt the legislation he asked for and to confirm his new team, it would be strange to talk in such an aggressive tone. Adopting the laws he requested and firing a few top officials who already resigned are not priorities; they are what people want to hear on TV. His priorities still to be set and explained. The main “aftertaste” is left by his statement, “I am ready for everything, so our heroes will not die anymore.” What does he mean by “everything”? Surrender, no EU or NATO perspective, and gas deals? This “everything” leaves it all completely unexplained.

Image: Ukraine's new President Volodymyr Zelenskiy applauds after taking the oath of office during his inauguration ceremony in the parliament hall in Kyiv, Ukraine May 20, 2019. REUTERS/Valentyn Ogirenko