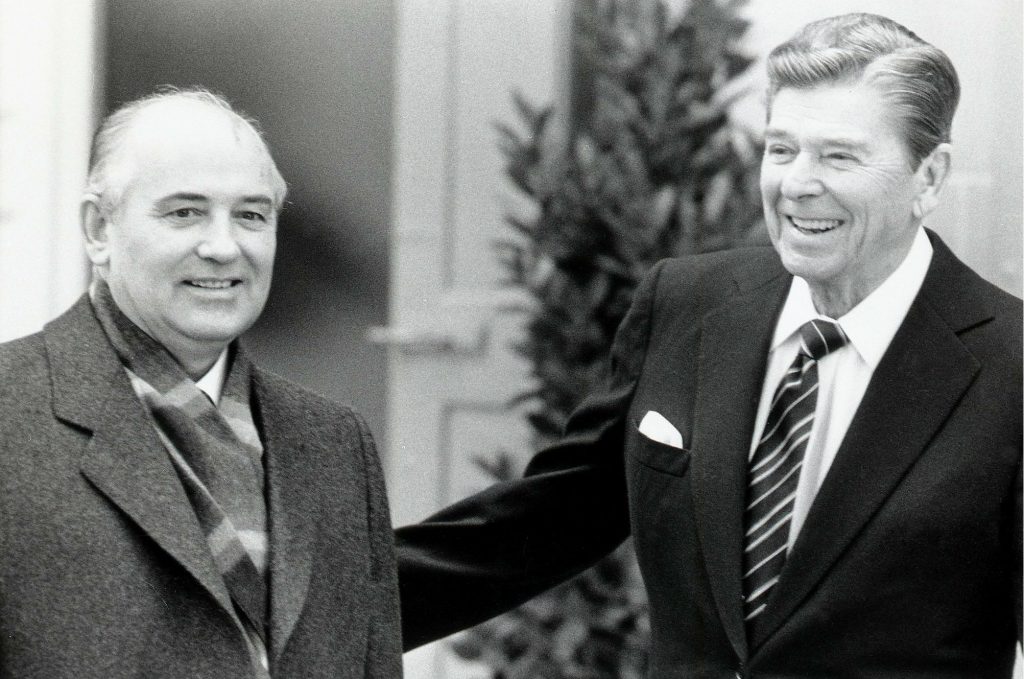 In April, Ukrainians made actor Volodymyr Zelenskyy president. Immediately, comparisons began between Zelenskyy and Ronald Reagan, America’s two-term president who was also a former actor. However, Reagan succeeded not because of his acting, but rather for the achievements he delivered. There are other important differences: Reagan has served as governor of California and crossed the country as a motivational speaker for General Electric, learning the issues of the day.

But regardless of their similarities and differences, Zelenskyy can learn from Reagan’s example. Reagan was consistently principled toward the USSR. In spite of the Soviet Union’s crimes against humanity, Reagan was always willing to talk with its leadership about ways to bring peace. However, he was also principled enough to walk away from bad offers. Reagan practiced the doctrine of “peace through strength,” and the lesson for Ukraine holds true today.

While Reagan’s international achievements were historic, the American people loved him because he improved their bottom line. His quick and decisive action during his first days in office delivered a controversial tax cut. While opponents predicted economic catastrophe, the results were a 92-month economic expansion, the second longest at the time.

How can Zelenskyy deliver similar economic growth for Ukraine? Here are five recommendations based on Reagan-like principles for modernizing and improving Ukraine:

1. Bring capital back to Ukraine. Since 1991, much of the country’s wealth has been plundered and moved offshore. The past is the past, and today Ukrainians need jobs and livable wages. A one-time tax amnesty could help to achieve these goals; however, the amnesty must have two conditions. First, there can be no questions about the source of the earnings except verification that they are not from sanctioned Russian sources. Second, a one-time flat tax on capital should be applied to bring revenues to the state budget. The return of capital itself will accelerate economic growth, and the simultaneous increase in the state budget will help pay for infrastructure and other priorities. Reagan brought capital back to the United States but unleashed it through tax cuts; Zelenskyy can do that through a tax amnesty.

2. Bring Ukrainians back to Ukraine. As Zelenskyy noted, there are more than 65 million Ukrainians in the world. However, antiquated Soviet laws prevent Ukrainians from holding dual citizenship. For a country that has seen its population decline from 52 million in 1991 to just 42 million today, it is clear that Ukraine is doing something wrong. By legalizing dual citizenship, Ukraine can begin to stem the tide of brain drain. In short, Ukraine needs more Ukrainians. Not only will this increase the tax base, it will improve the economy as well. Reagan didn’t need to bring Americans back; instead, he created an economy and society where Americans and foreigners wanted to live. Zelenskyy must do the same in Ukraine.

3. Bring infrastructure to Ukraine through a designated fund. Investment in Ukraine is helpful, but having the infrastructure to support it is crucial. Historically, infrastructure projects have been boondoggles which produced poor roads, unsafe transportation, and outdated buildings. Money from Western donors has often been wasted by populist politicians providing social benefits, rather than its intended purpose. Ukraine needs to create a designated infrastructure fund under international supervision that can only be used for projects in the national interest like roads, bridges, educational institutions, and transportation systems. A portion of the state budget and all Western donor money must be specifically designated for this fund, and the monies cannot be spent on other expenses. Reagan increased the fuel user fee, but in doing so ensured that it was paid only by those who used the roads, and that the proceeds went specifically to interstates and transportation infrastructure. This model has proven effective, and will work in Ukraine.

4. Bring energy to Ukraine. Ukraine has made strides in energy independence from Russia through reverse supplies and attracting foreign investment into the renewables sector. However, Ukraine must honor its contracts in the electricity and energy sector and do everything to demonstrate that it is a trusted country to do business in. This is the only way to develop Ukraine’s domestic oil and gas market. Transparent tenders for the development of existing deposits/assets must be issued, incentives need to be created to liberalize the market, and protections for international investors must be developed. Ukraine must be serious about improving the cost of heat and electricity, and protecting investors from corruption, raiders, and enemy nations. When Reagan took office, the United States was being held hostage by OPEC for its energy needs. However, Reagan’s determination to develop domestic energy resources in the Gulf of Mexico resulted in the US becoming an energy exporter by the time he left office. Zelenskyy needs the same determination and vision to develop Ukraine’s energy industry, starting with a comprehensive national energy strategy, including a growing allotment for domestic renewable development.

5. Bring justice and a functional legal system to Ukraine. The Ukrainian people have long hated their politicians because they live under a separate set of laws from ordinary folks. There is no justice in the legal system, and anyone can be hauled into court at any time for any allegation. Ukraine’s legal system is broken and tweaking the current system is the equivalent of rearranging the deck furniture on the Titanic. The broken system needs to be replaced with a modern system based on English law. Just as Reagan restored faith in the federal system of government, Ukrainians need faith that their legal system will deliver justice. If Zelenskyy wants to make a real impact, he must fix the broken legal system.

Reagan was a decisive leader. Because of this, many hated him and opposed his policies. However, history has vindicated Reagan for his boldness and strong leadership. Zelenskyy would be wise to follow Reagan’s example and be equally bold and decisive in his efforts to improve the lives of ordinary Ukrainians and bring Ukraine to its rightful place in the world.

Michael Yurkovich is president of Refraction Asset Management, based in Calgary, Alberta.