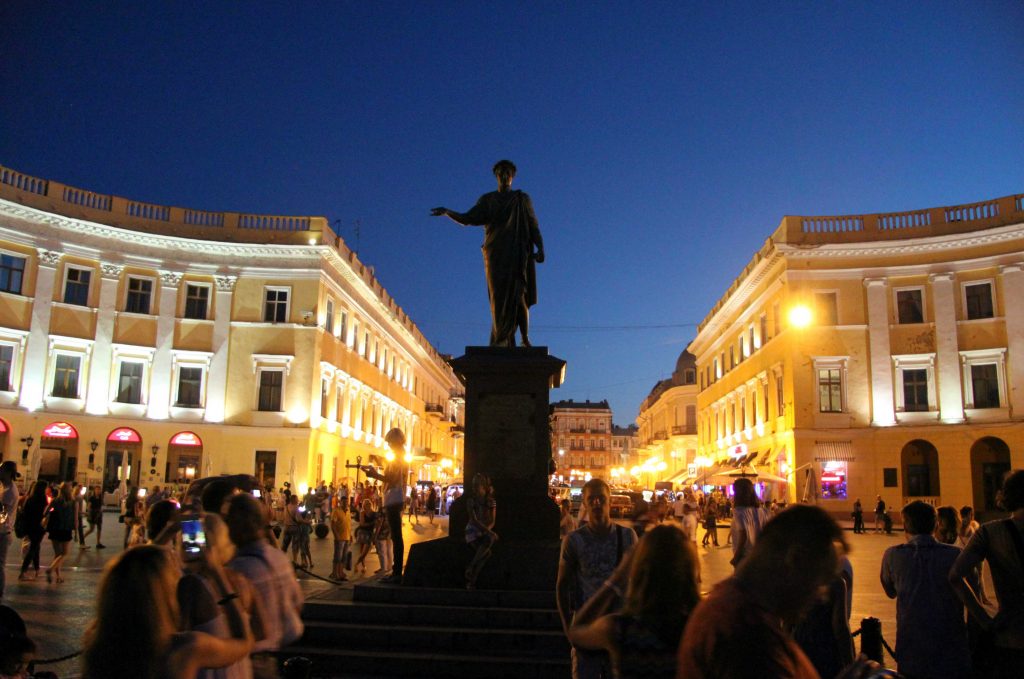 Early April will see the closure of Ukraine Today, which had been the only full-time English language TV news service offering Ukrainian perspectives to international audiences. The channel will reportedly continue online, but the end of its broadcasting is a sobering development hinting at the difficulties of finding sufficient funding for major Ukrainian English-language media projects. (Editor’s note: both authors worked for Ukraine Today.) Ukraine’s threadbare English-language coverage just got even thinner.

Nevertheless, efforts to introduce Ukraine to international audiences continue, with the latest arrival seeking to put the spotlight on the country’s most cosmopolitan city.

April is traditionally an optimistic time of year in Odesa. It is the month when the Black Sea port lazily shakes off its prolonged seasonal slumber. The city’s elegant Tsarist-era boulevards once again fill up with swaggering and stylish strollers, while its rich cultural life gently moves into top gear. For the first time ever, the start of spring will be trumpeted in English, thanks to the arrival of the city’s first English-language lifestyle monthly. The Odessa Review, which launches this month, is an English-language magazine designed to make Odesa more accessible to international audiences. It joins a small band of English-language media outlets charged with trying to bridge the international information deficit of all things Ukrainian. The task facing these English-language outliers is a Herculean one. Despite being the largest country in Europe, Ukraine remains terra incognita. This lack of visibility has been a major factor behind the success of Russia’s information war, creating a security headache for the entire continent.

Ukraine has long suffered from a low international profile. It is difficult to pinpoint why. The country’s historical lack of sovereignty is certainly a factor, as is the relative cultural closeness of the Russian colossus. Chronic political ambiguity has not helped, with post-Soviet Ukraine consistently falling between the two stools of Eurasian authoritarianism and the fledgling democracies of Central Europe. For many veterans of the Cold War, the idea of a fully independent and separate Ukrainian state has simply proven too great a leap of the geopolitical imagination. Instead, since 1991 Ukraine has found itself relegated to a kind of pseudo-statehood.

This ignorance of Ukraine has always been aggravating, but no one regarded it as a national security threat until the start of the Kremlin’s hybrid war against Ukraine. All that changed when “little green men” began appearing in Crimea and eastern Ukraine. It soon became clear that disinformation would play a key role in the Kremlin’s hybrid war, with Russia’s information offensive relying heavily on outside ignorance of Ukraine. Ukrainians watched in horror as the country’s complex relationship with its Tsarist and Soviet past was reduced to the tribal binary of Russian-speakers versus Ukrainian-speakers. Ukraine was depicted as a fascist junta, a Nazi dictatorship, and a failed state. These nightmarish visions gained remarkable levels of traction in the international media, largely because Ukraine was such an unknown quantity.

Over the intervening two years, the situation has gradually improved. Ukraine’s longest-running English-language outlet, the Kyiv Post, continues to produce excellent news coverage. In the field of monthly magazines, The Odessa Review joins a handful of existing titles including Business Ukraine and Lviv Today. Kharkiv has recently unveiled an English-language online news portal. There are plans to launch Ukraine Business Journal. The popular Euromaidan startup channel Hromadske TV produces a weekly English-language show. A number of public and private Ukrainian channels have also dabbled with English-language content. Initiatives such as “Stop Fake” have entered the English-language arena, producing weekly bulletins exposing the latest Kremlin disinformation. These efforts are important, but they find themselves completely dwarfed by the massive budgets and lavish production standards of Russia’s Kremlin-funded English-language mouthpieces. As a result, Kremlin content continues to dominate Google searches for Ukraine stories, while Russian fakes drown out Ukrainian debunkers.

Nor is the international media necessarily helping. Coverage of Ukraine has improved enormously since the naïve early days of the Crimean invasion, when hapless Western correspondents struggled to deal with the disorientating absence of Russian army flags and lapel badges. Nevertheless, the vast majority of Ukraine coverage still comes through Moscow bureaus that are, at best, ill equipped for the task. Almost all the major international media outlets receive their Ukraine coverage from correspondents who live and work in the Russian capital. The lack of flights between Russia and Ukraine has made reporting trips to Kyiv, Lviv, and Odesa difficult. While they generally claim to be appalled by the politics of Russian President Vladimir Putin, most Moscow correspondents have a heavily Russocentric view of the region. Perhaps inevitably, they are prone to viewing Ukraine through a Russian prism and giving undue weight to Russian narratives in their reporting.

There is no quick fix to this situation. Even in a calm environment, it would have taken years to raise Ukraine’s international profile to an acceptable level. The necessity of siphoning out Russia’s ideological poison will doubtless make this process longer and more arduous. Nevertheless, it has never been more important to introduce the real Ukraine to the international community. More coverage is desperately required highlighting positive aspects of contemporary Ukraine such as the ultra-hip Ukrainian fashion industry and the country’s endless tourism opportunities. The country’s booming agriculture and IT sectors should be featured on business digests and in weekend supplements.

There are plenty of positive Ukraine stories waiting for journalists prepared to look beyond the same tired headlines of war and corruption. While the media has provided endless coverage of the Syrian refugee crisis, Ukraine’s infinitely more successful handling of a similarly large refugee influx has received scant attention. This needs to change. The media must also do more to challenge Kremlin myths about fascist atrocities and oppressed Russian-speakers. How many people in Europe or North America know that Kyiv is the largest Russian-speaking city in the world outside of Russia? How many are aware that Ukraine has been one of Europe’s most multicultural communities for centuries?

Until international audiences become better informed about the realities of modern Ukraine, they will remain vulnerable to further information attacks. The initial success of Russia’s hybrid war has shown how effective disinformation campaigns can be in shaping modern conflicts.

The task now is to craft a comprehensive counterattack. Content is not the problem. Unlike the Kremlin, Ukraine has truth on its side. The real challenge is reaching as wide an audience as possible with attention grabbing content. This is where Ukraine must call on the support of its international partners. The Odessa Review will focus on covering the country’s culture. Initiatives like The Odessa Review are welcome additions to Ukraine’s English-language ensemble, but it is vital that mainstream media also cover the multiple facets of the real Ukraine. The best way to disarm the Kremlin is through the deployment of an overwhelming information arsenal.

The difficulties that Ukraine Today has faced highlight how challenging it is to stay solvent in the underfunded Ukrainian English-language media market. The end of Ukraine Today’s international broadcasting illustrates the need for major support for this fledgling industry from international donors and Western organizations.

Peter Dickinson is the publisher of Business Ukraine magazine and Lviv Today, and editor-at-large at The Odessa Review. He was previously chief editor of Ukraine Today and What’s On Kyiv. Vladislav Davidzon is chief editor of The Odessa Review and Tablet Magazine’s European culture critic. He has reported widely from Eastern Europe, France, and Ukraine, and was previously Ukraine Today’s Paris correspondent.