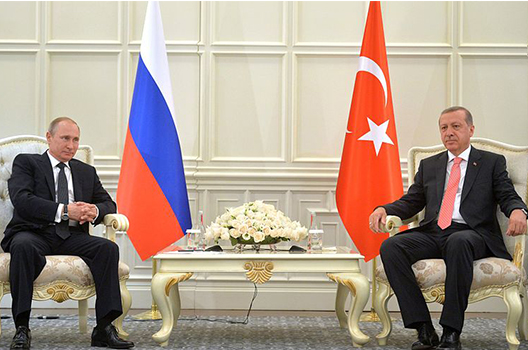 The rapprochement between Russia and Turkey is a significant geopolitical development that increases the leverage of each nation. Where the interests of Moscow and Ankara do not conflict, their new relationship will be useful to both. Yet their different interests limit the significance of the new amity.

The rapprochement was essentially a Turkish decision, as was the sharp spike in tensions last November. Under President Vladimir Putin, Russia has assiduously courted Turkey for the past fifteen years with largely positive results. While Turkey is a stalwart NATO member and has long wanted EU membership, it has been pursuing a more independent and unpredictable foreign policy since the ascent of the Justice and Development Party in 2002.

That policy has at times given fits to its traditional allies. This has been especially true in the Middle East: Turkey denied the US the chance to launch an attack on Iraq in 2003 from the eastern part of the country, slammed and downgraded relations with Israel over the Gaza blockade, and supported various radical Islamist groups against the Bashir al Assad regime in Syria.

Putin’s Courtship of Turkey
Moscow’s longtime courtship of Turkey has paid off in clear, if not spectacular, ways. Ankara has long fashioned itself a protector of Crimean Tatars. Yet Ankara’s reaction to Moscow’s “annexation” of Crimea and repression of the Tatars has been muted. For instance, despite the decision by the West to avoid economic interactions with Russian-occupied Crimea, Turkish Airlines has flown regularly to Simferopol since June 2014. When the EU sanctioned Russia for its aggression in Ukraine, Turkey did not, and even became an alternate supplier of agricultural goods after Russia, in response, banned the import of EU products.

The relationship between Russia and Turkey has also been enhanced by robust economic ties—Russian gas exports, Russian tourists in Turkey, and Turkish construction projects in Russia—as well as by Erdogan’s personal admiration for Putin’s authoritarian swagger and assertive foreign policy.

The Falling Out
Distinctly different national interests in Syria, however, set the stage for the sharp deterioration in bilateral ties last fall. While Erdogan has been supporting the Islamist opposition to drive Assad from power since the fall of 2011, Putin has been unwavering in his defense of the regime. Putin’s dramatic intervention in Syria in the fall of 2015 need not have led to a major crisis with Ankara, if not for two things.
First, the Kremlin chose to test Turkey’s defenses by violating its airspace four times. After the first three incidents, Ankara complained and issued a warning. On the fourth time, the Turks shot down the Russian plane.

Second, Erdogan chose to make Moscow’s incursion into Turkish airspace an issue. In the first hours after the shoot-down, the Kremlin tried to downplay the incident. Speaking publicly, both Russian presidential spokesman Dmitry Peshkov and Defense Minister Sergei Shoigu said that it was not clear who shot down the plane and that it might have been Turkmen groups in Syria. It was the Erdogan government that announced it had ordered the shooting.

This response, which Putin termed a “stab in the back,” prompted a sharp reaction. Moscow launched a campaign to stop Russian tourists from visiting Turkey, banned the import of many Turkish goods, and deployed its most advanced surface-to-air missiles, S-400 SAM, to Syria. In February, it deployed its most advanced bomber, the SU-35, to Syria. Early in the new year, Turkey and its NATO allies continued to complain of Russian warplanes violating Turkish airspace. Moscow also began to talk about providing greater support for the Kurds in Syria. Moscow insisted that there could be no return to normal relations until Turkey formally apologized for the incident.

The New Rapprochement
In late June, Erdogan issued an apology, not an easy or ordinary thing for a Turkish leader to do. Moscow quickly welcomed it and took steps to enhance ties. Moscow loudly expressed support for Erdogan after the mid-July coup attempt, in contrast with Western governments’ human rights concerns as Erdogan rounded up thousands of possible suspects.

Putin also invited Erdogan to visit St. Petersburg on August 9 with a full delegation. In St. Petersburg, the two sides vowed to restore relations to pre-crisis levels, which means the removal of the ban on Turkish agricultural exports to Russia, a return of Russian tourists to Turkey, and renewed talks about the Turkish Stream project (which had broken down in mid-2015 for economic reasons) for delivering Russian gas to southern Europe.

The Impact
The restoration of ties between Ankara and Moscow will have notable effects. It will be good for the economies of both countries. With Russia’s economy still reeling from the impact of low hydrocarbon prices and Western sanctions, the resumption of agricultural exports in particular will be welcome. It will also sideline Turkey as a modest supporter of Ukraine in its confrontation with Russia. After the shoot-down of the Russian airliner, Ankara and Kyiv exchanged high level visits and the Ukrainian and Turkish navies conducted a couple of exercises in the Black Sea. These steps will likely lead to no significant security cooperation, and Ankara is not expected to show greater concerns for the worsening plight of Crimean Tatars.

Along with Bulgaria, Turkey will continue to be skeptical of Romania’s interest in enhancing NATO’s naval presence in the Black Sea. The opening to Moscow will also give Ankara more leverage in talks with the EU about managing the refugee problem created by the crisis in Syria.
The impact of warming ties between Moscow and Ankara, however, should not be exaggerated. Critical differences remain. Erdogan recognizes that he was able to risk shooting down the Russian warplane last November because Turkey is in NATO—even if his government complained that NATO’s support was not strong enough at the time.

Turkish and Russian interests continue to differ in both the Caucasus and Syria. Ankara holds regular trilateral talks with Georgia and Azerbaijan as part of its effort to counter Russian efforts to exert greater influence in the Caucasus. In the Middle East, Syrian warplanes bombed Kurdish positions just last week, a development no doubt as pleasing to Ankara as it was displeasing to Washington. Yet Erdogan’s opposition to Assad has not weakened, and Turkey’s growing terrorist problem with ISIL is not addressed by Russian bombing that focuses on the moderate opposition.

Overall, this rapprochement is a modest win for both Putin and Erdogan. It will complicate both Washington and Brussels’ relations with Ankara without changing them fundamentally.

John E. Herbst is Director of the Atlantic Council’s Dinu Patriciu Eurasia Center; he served as US Ambassador to Ukraine from 2003 to 2006.