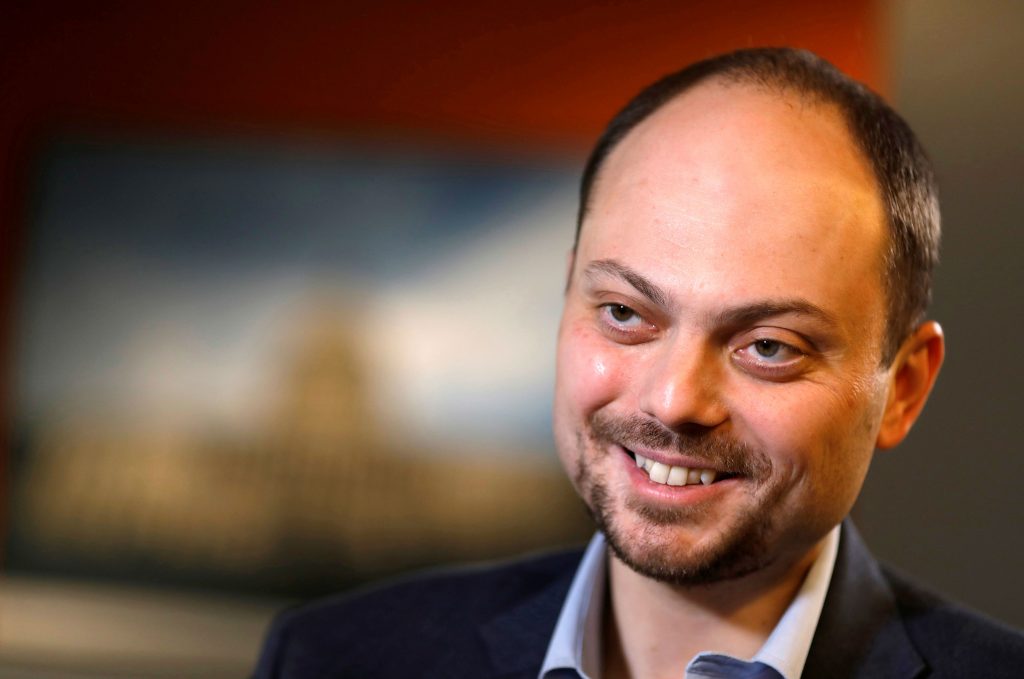 Vladimir Kara-Murza sits for an interview at the offices of Reuters in Washington, DC, March 13, 2017. REUTERS/Aaron P. Bernstein

On September 13, a man who cheated death twice came to Washington. Vladimir Kara-Murza, a journalist and deputy head of the nongovernmental organization Open Russia, survived a second state-sanctioned poisoning in February. He has lived to deliver a message for democratic allies in the West.

In a speech at the US Capitol, Kara-Murza said, “It is up to Russians to change the government. We only ask that international governments do two things: be honest and open about the reality in Russia. And don’t actively support Putin by treating him as an equal, or by allowing [his associates] to store stolen wealth overseas.”

Kara-Murza was visiting Washington for a screening of his biopic Nemtsov, a documentary about his slain friend and colleague Boris Nemtsov, at the National Endowment for Democracy (NED) on September 14. While in the city, he met with policymakers and discussed the state of authoritarianism in Russia.

The West has more power to bolster human rights in Russia than it thinks, and it can do this with limited repercussions to its own interests. Kara-Murza recalled that Nemtsov described the US Magnitsky Act, which sanctioned Russian officials for human rights abuses, as “the most pro-Russia act ever passed in a foreign country.” Senator John McCain agreed, observing that, “The sanctions really had an effect. There’s one thing that oligarchs love to do, and that’s travel around and spend lots of money.” Carl Gershman, president of the NED, called the act the most important piece of human rights legislation passed in the last generation.

Vadim Prokhorov, the Nemtsov family’s lawyer, noted that Western officials can continue to apply pressure by raising the murders of autocrats’ critics in meetings with their foreign counterparts.

Kara-Murza admitted that “it is not easy to remain an optimist when your best friend has been killed and you yourself have been poisoned twice, but I try…When the rule of law returns to Russia, those of us who are still alive will go back to Western capitals and argue for the repeal of the Magnitsky Act, because we won’t need it anymore.”

In the meantime, there is still work for democrats to do. Kara-Murza argued against opposition boycotts in Russia, as “when you’re not on the ballot, it’s difficult for you to win.” The opposition does make progress when it contests elections, notably in Moscow’s 2013 mayoral race, when anticorruption campaigner Alexei Navalny won 30 percent of the vote.

“Big political changes happen quickly in Russia,” Kara-Murza continued, “and [our] objective is the political education of young people.” Engagement in the electoral process, however stage-managed, prepares liberals in the next generation to govern on the day when Putin cedes power, either politically or involuntarily.

Although restrictions on NGOs in Russia preclude most practical support for these efforts, supporters in the West can help by continuing to publicize the reality about conditions in Russia, and by funding Russian-language broadcasting to provide an alternative to news curated by the government.

Symbolic gestures are also powerful. On October 9, Nemtsov’s birthday, activists in Kyiv will propose that the mayor fulfill his promise to rename a street after Nemtsov, according to Kateryna Smagliy, the director of the Kennan Institute’s Kyiv office. The move mirrors commemorative efforts in other democratic capitals. Congress’ current motion to designate the square opposite the Russian Embassy in Washington as Boris Nemtsov Plaza rebukes oppression, and reminds Americans and Russians alike that Russia “does not have to be associated with autocracy.” One day, Kura-Murza predicted, “the Russian Embassy will be proud to have Nemtsov’s name in their address.”

Anastazia Clouting is an independent editor and political analyst. She is also a 2016 Penn Kemble Fellow at the National Endowment for Democracy and tweets @A_Clouting.