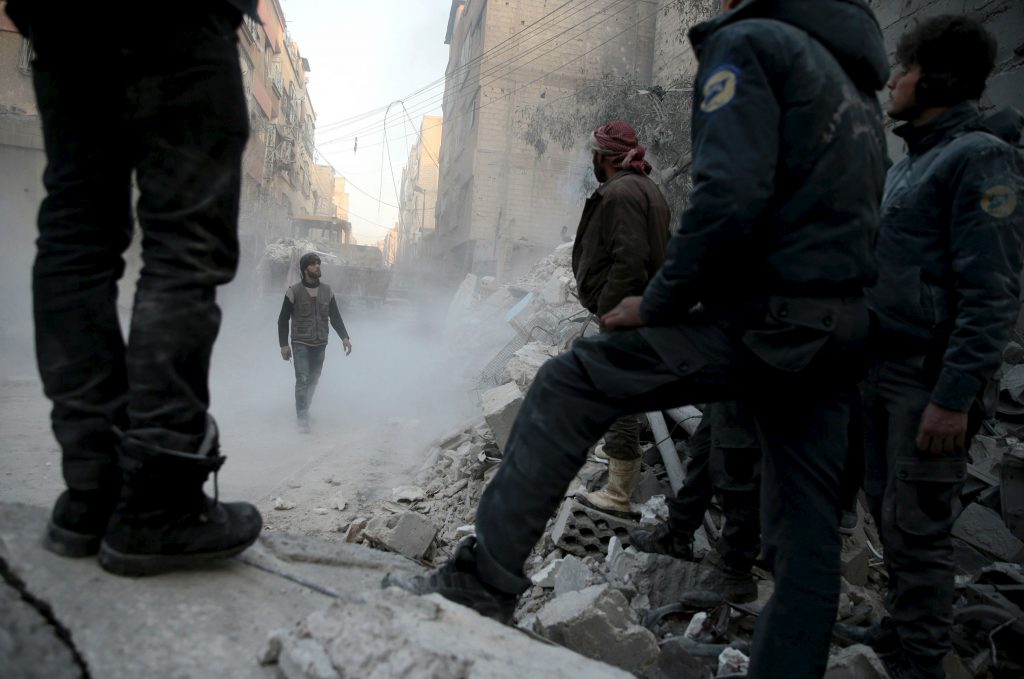 Residents look for survivors in a site hit by what activists said were airstrikes carried out by the Russian air force in the town of Douma, eastern Ghouta in Damascus, Syria January 10, 2016. Credit: REUTERS/Bassam Khabieh

While Russia’s intervention in Syria appears to have helped Syrian President Bashar al-Assad’s regime claw its way back from the brink of defeat, the Kremlin’s gambit is in many ways a limited one.

Russian President Vladimir Putin, thanks to technical and political constraints, cannot significantly ramp up his forces in the region. This means that the relatively small force of fighter jets and bombers already deployed in Syria are the only military tools at hand to achieve Russia’s objectives in Syria. Russia may be playing a big game in Syria, but ultimately it cannot play a bigger one.

Russia’s small force in Syria has already achieved a great deal. While initial reports indicated that Russian intervention was failing to help Assad take back territory, they now appear to be playing a major role. Russian air attacks, which have targeted rebel positions, supply routes, and seemingly civilian populations, have in recent weeks helped Assad’s forces reclaim a series of cities, including Salma, a town that had been held by opposition forces for years. At least one local commander has cited the Russian air force as the greatest threat to his troops.

Not only has Russia’s intervention proved successful, it has been cheap. The cost of Russian air operations in Syria, which are responsible for the vast majority of strikes alongside a smaller seaborne contingent, stood at only $4 million per day in October.

Since then the number of Russian airplanes has swelled from thirty-four fighter jets to seventy-one planes, including the massive TU-95 strategic bomber, in November. These additions have likely raised the cost of operations, but not by a substantial sum.

However, while Moscow’s operations in Syria appear to be both cheap and effective, they also represent the highest level of possible Russian action. Committing more planes or even troops to Syria would be both technically difficult and, more importantly, politically painful.

First, the Kremlin would be hard pressed to add more planes. In June 2015, five planes, one Su-24, two MiG-29s, a Su-34 and a Tu-95, experienced catastrophic accidents. Three of these planes, the Su-34, the Su-24, and the Tu-95, are used in Syria. Experts blamed the crashes on a mix of factors, including aging Soviet gear, the Russian air force’s generally weak focus on maintenance, and a lack of experienced pilots. These problems, which require a systemic, long-term solution, will prevent the mass deployment of the Russian air force to Syria.

Second, even if Russia could ramp up its military involvement in Syria, particularly with the introduction of ground troops, to do so would be political risky for the Kremlin. While state-run media frequently lead Russian public opinion by the nose, a full-on intervention in Syria would raise the grim specter of the wars in Chechnya and Afghanistan. While Russians, prompted by state broadcasters, largely support the Kremlin’s defense of Assad, a Levada poll in September found 67 percent of respondents were opposed to sending in troops.

Putin would do well to respect their wishes. Russia, battered by the dual blows of Western sanctions and the falling price of oil, is expected to see its economy contract by at least 1 percent this year. Although Putin personally continues to score high in opinion polls, economic pressures appear to be fueling dissatisfaction with the regime as a whole. A recent protest by Russian truckers over a toll hike that benefits the son of a Putin crony garnered 72 percent approval in Moscow and a 63 percent approval rate across Russia. Russia is on the edge, and the Kremlin, so often aware of public opinion, would find it difficult to rock the boat.

Of course, ultimately it may not matter whether Putin adds more planes or men to the Syrian conflict.

Russia’s small force has prevented the collapse of regime forces and achieved gains on the battlefield. These gains will significantly strengthen Assad’s hand at the negotiating table, and at the very least prove Putin’s commitment to what he sees as the primacy of state sovereignty against an interventionist West. As long as Russia keeps Assad from outright losing, Putin can declare a victory.

But if the opposition can survive Russia’s attacks and eventually launch counter-blows against Assad’s forces, then Russia has few options to ramp up its operations. In the back and forth of the Syrian war, there is already some evidence that Russia is losing its edge. On January 20, opposition fighters were reported to have made gains in the northwest as poor weather hampered Russian air attacks. Russia cannot repeat its days in Afghanistan and endlessly pump in troops and matériel until sheer exhaustion compels retreat. Putin’s success in Syria depends largely on the tools he has already deployed.

Sam Skove is the communications coordinator at the Atlantic Council’s Eurasia and Global Energy Centers and a master’s student at Georgetown University’s School of Foreign Service. He was previously an editor and journalist at the Moscow Times.