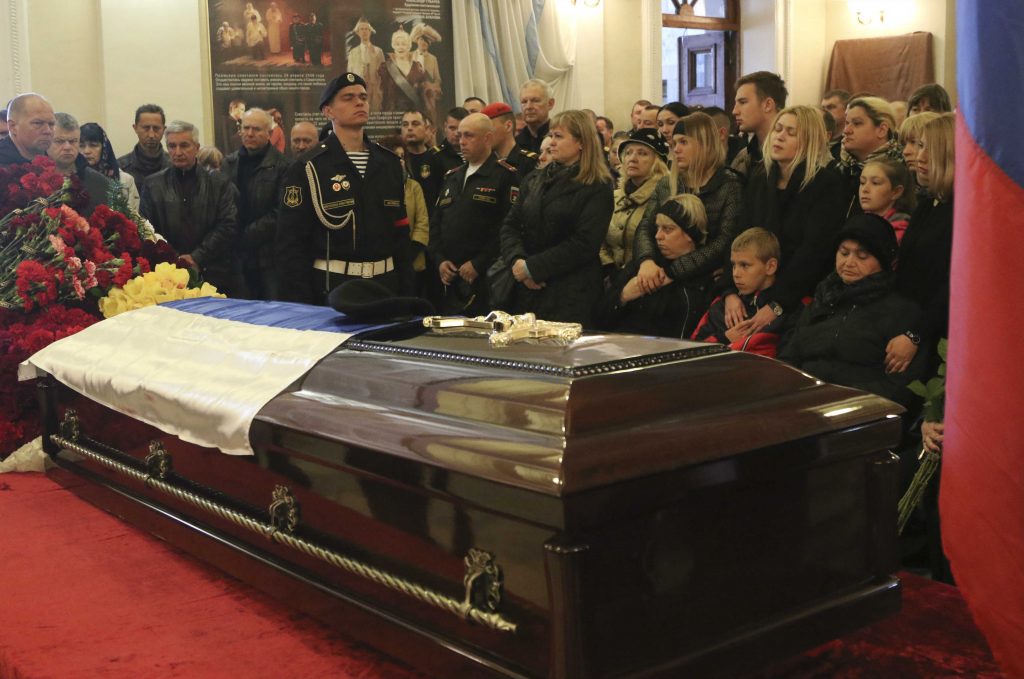 Russia’s armed aggression against Ukraine and intensive military operations in Syria have caused a very big problem: a shortage of qualified people to man its occupation forces. This personnel gap, caused by permanent, heavy losses suffered by Russia’s forces, has drastically changed the scale and character of its military missions.

At the early stages of the conflicts, this shortage of qualified military personnel was corrected by recruitment from the Army Special Operations Forces, the Federal Security Service (FSB), the Foreign Intelligence Service, and other special services. But now, to fill this gap further, Russia has moved to employ private military companies (PMC), expand its recruitment base, and punish contract soldiers for refusing to partake in its illegitimate operations.

To date, information about Russian PMCs remains limited. At least ten PMCs exist in Russia; some operate outside its jurisdiction. Following the Kremlin’s September 2015 intervention in Syria, about 1,500 Russian mercenaries arrived from the Russian PMC “Wagner,” which is linked to operations in Ukraine, where the group is known as “The Cleaners” in areas controlled by Russian and Russian-backed forces. Soviet fighters of the PMC “Malhama Tactical,” with mainly Uzbek and North Caucasus roots, have been noted as forming the first jihadist PMC with a “distinct niche between the worlds of professional PMCs and jihadi groups operating in Syria.”

To further expand its contracted recruitment base, the Kremlin has also amended the recruitment process for Russian conscripts, military reservists, stateless persons, and foreign nationals. Recruitment of Russian citizens for contracted military service is facilitated by the legislative package “On the Introduction of the Draft of Federal Law on Amendments to the Federal Law on Conscription and Military Service,” which passed on October 14, 2016. It enabled short-term missions for contracted recruitment of Russian conscripts and reservists.

Previously, the first military contract with the rank of soldier, seaman, sergeant, or sergeant-major was to be signed for two or three years. Positions with the rank of warrant officer, sub-officer, or officer stipulated five years. Now, these categories are allowed to sign for a term of “between six months and one year” in the cases of “disaster relief or efforts related to a state of emergency, restoration of the constitutional order, and other extraordinary situations, or to take part in collective measures to maintain or restore international peace and security.”

Importantly, the amendments are further justified by “changes in the military and political situation, and intensified activity of international terrorist organizations,” resulting in “the necessity for increasing of mobility of troops (forces), the creation of combined and irregular detachments, and their expedited staffing by contract servicemen, to quickly accomplish short-term yet crucial missions related to participation in peace support operations and operations to fight against terrorist and extremist organizations.” The amendments were signed into law by President Vladimir Putin on December 28, 2016.

These amendments enable Russia to rapidly deploy and use a large invasion and occupation army, under the pretext that the detachments are carrying out “peace support operations” and “fighting against terrorist and extremist organizations.” In effect, they legalize the unlawful recruitment of conscripts for “short-term tours of duty” to Ukraine as contract soldiers.

Significant changes have also been made to the procedure for contracted recruitment and service in the Russian Armed Forces for stateless persons and foreign nationals. On January 2, 2015, a presidential decree amended the “Provision on the Procedure of Military Service” to facilitate the contracted participation of stateless persons and foreign nationals in the Russian Armed Forces; the adoption of Russian citizenship is not required. This includes active service and operations abroad.

The low quality of life, high unemployment rates, and Russian military bases in Central Asia and the Caucasus region make the CIS a fertile recruiting ground. Importantly, the territories of other separatist regions fomented by the Russian Federation (i.e., Crimea, South Ossetia, Abkhazia, and Transnistria) also contain Russian military bases and equipment, and may also deliver fresh recruits. Russian-speakers in Western Europe, the Middle East, or North America may be willing to join; but with payment and social benefits well below international standards, they are likely to come from fringe groups. Russian experts estimate that twenty-five million Russian speakers could be recruited from abroad.

Such foreign recruits may be used as part of Russia’s neo-imperial policy and hybrid war waged through illegal armed formations, which could, at any point, turn into an open, armed aggression of the Russian army. A real and serious threat lies in the recruitment and training of foreign individuals by Russian special services for use in extremist or terrorist groups and activities. The increase of this risk can be seen in the growing number of Russian and CIS militants actively participating in extremist and terrorist acts by ISIS in Syria and Iraq, and by the Taliban in Afghanistan.

High casualty rates in the Russian military have also resulted in widespread avoidance of tours to the Ukrainian border. Between 2014 to mid-2015, the most avoided appointment was service in the 12th Reserve Command of the Russian Armed Forces, in Novocherkassk, Russia, which was created to “officially deploy” Russian military servicemen (under concealment) to Ukraine. Servicemen who try to avoid serving there have found themselves on the receiving end of the Russian government’s repressions. Russian courts fast-track resolutions to discharge and convict them, at times under threat of sentencing to penal colonies.

Employing PMCs, recruiting foreigners, and forcing servicemen to fight in illegitimate wars and follow unlawful orders may be categorized as war crimes. In addition to creating military advantages and cutting costs, Russia’s leadership may also be facing criminal liability for its decision to initiate armed aggression with the use of unlawful forces in Ukraine and Syria. The best evidence of such a course of events is the experience of leaders from former Yugoslavia, whose aggressive Balkan wars and ultra-nationalistic policies landed them as war criminals at the International Tribunal in The Hague.

Image: People attend a memorial service before the funeral of Russian marine, Major Sergei Bordov, who was killed in combat in Syria, in the Black Sea port of Sevastopol, Crimea, April 22, 2017. REUTERS/Pavel Rebrov