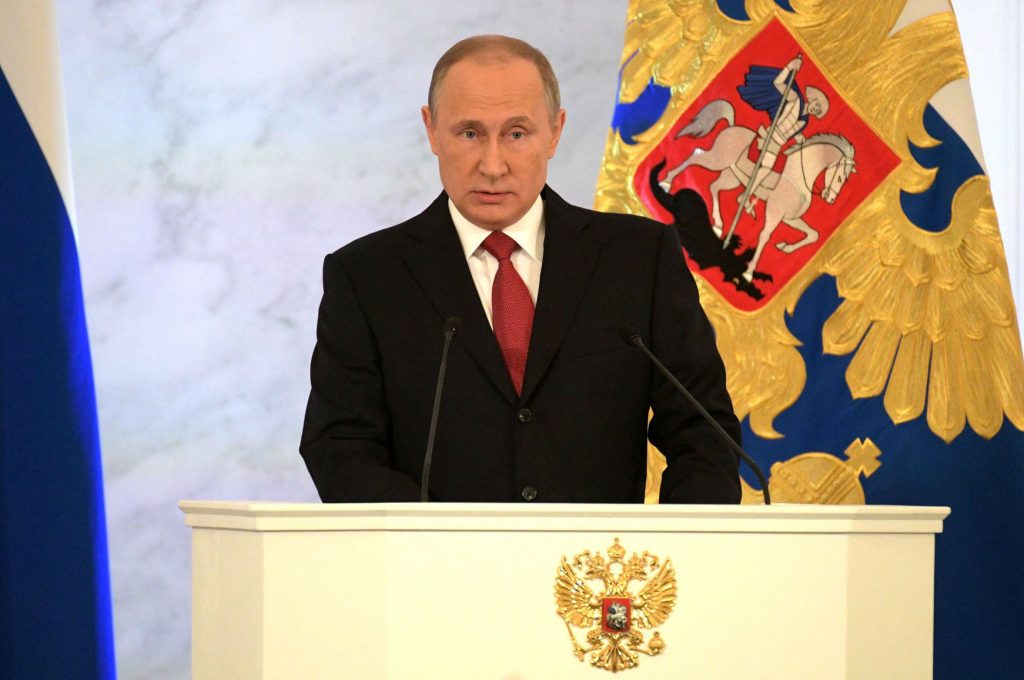 Russian President Vladimir Putin delivers his annual address to the Federal Assembly in the Kremlin on December 1. Credit: Kremlin.ru

Russia’s systematic attack on America’s political system dominates the headlines. Nobody besides President-elect Donald Trump denies that Russia attacked the US political system and electoral institutions. Moreover, Russia did so with impunity and, according to the Central Intelligence Agency and the White House, it did so under Russian President Vladimir Putin’s direct guidance to discredit US institutions and elect Donald Trump president. Furthermore, the White House alleges that Trump knew it, making his denials increasingly unconvincing.

We must address the implications and consequences of these facts.

First, Moscow also targeted senatorial and congressional candidates of both parties. Nobody seems ready to realize that Moscow will likely repeat these attacks in 2018 and 2020 until it is decisively defeated. In other words, every potential candidate for the next four years is now exposed, and our system is vulnerable at hundreds of points, thanks to the staggering ineptitude of the Obama administration and the Democratic Party. Indeed, this entire episode provides a miserable culminating point to the repeated intelligence and policy disasters in this administration pertaining to Russia. These problems must be addressed immediately by the Trump team, though it is hardly likely they will do so, given Trump’s stated views.

Second, the attacks on the US political system are not confined to the United States. They are part of Moscow’s comprehensive, multidimensional war on the West as a whole. As Sergei Ivanov told the Financial Times, “For us, the Cold War is a fact of life.” Moscow has attacked the political process in Germany, the Netherlands, France, Greece, Hungary, and Bulgaria, and is the leading cyber attacker in Finland and Sweden. Its forces wage an unrelenting information war comprising political subversion and other tactics from the Baltic to the Black Sea.

There is reason to believe these tactics include terrorism. Moscow already attempted a coup in Montenegro using Serb mercenaries, and has been accused of ties to the Kurdish terrorist attacks and assassinations in Turkey, not to mention the murder of Alexander Litvinenko and others in England. Therefore, while intelligence agencies may be reluctant to publicize their conclusions, the public record suggests that Moscow has returned to the centuries-old Russian tactic of using every means at its disposal to install pro-Russian clients in power. Information warfare is, in this context, merely the latest technology available to pursue those strategic objectives.

The exposure of the entire US system, along with the proliferation of these multidimensional attacks on our allies, should impel Congress to undertake a bipartisan investigation as soon as possible. This is not a question of Democrat or Republican but of the vitality and integrity of our political system. When one adds the points that millions in dirty Russian money have been invested in Donald Trump’s businesses (as uncovered by the Financial Times, among others), and that Trump unconvincingly continues to scoff at these facts, denigrate his own intelligence community, and have surrogates imply that he will end sanctions and make a deal with Russia, we must ask ourselves why Trump is afraid to support this investigation.

Did he, as the White House now says, know about these attacks and their purposes? Do the connections made by his associates or through his businesses suggest undue influence? Will the United States remain vulnerable to such attacks and is he vulnerable to blackmail for possibly knowing about them in advance? Can the United States remain an effective NATO ally if its system is so vulnerable? Will Putin be allowed to repeat this performance if he does not get what he wants?

We know that Russian demands are rarely if ever satisfied by appeasement. If Trump and his incoming team wish to be effective and legitimate executors of national policy, they have no choice but to answer these questions by allowing such an investigation to take place. Otherwise, we will have chaos in the United States and in the transatlantic alliance for at least the next four years.

Beyond those considerations, it is also necessary to organize an effective resistance as soon as possible, which includes saturating Russia with the truth about Putin’s rule and its consequences for Russians, outlining Russia’s true condition, and otherwise repaying him in kind. Several writers have already made valuable suggestions along this line, but it is quite clear that there needs to be an effective, coordinated strategy by all the members of the alliance—for whether or not they wish to acknowledge it, we are all under attack from Russia.

Though dialogue with Russia is always to be preferred, it must be based on shared interests and a shared acknowledgment of reality. And that is presently impossible. Given what is now happening, a deal ending sanctions and recognizing Moscow’s demands for Crimea and “equality with the West” would be not a deal but a surrender. Nor would it lead to peace. Instead, it would lead to new demands.

Maxim Litvinov, Stalin’s former foreign minister, told US correspondent Richard C. Hottelet in 1946 that more concessions to Stalin would only lead him to raise the ante. So, too, the Obama administration’s failure to respond to these attacks on Western interests has only increased Putin’s appetite, and led to ever-greater disasters like the current crisis over our election and the Syrian nightmare. If Trump wants to succeed as president, he needs to address these issues now and do so decisively; otherwise, he will fail, and with him America and quite likely our allies as well.