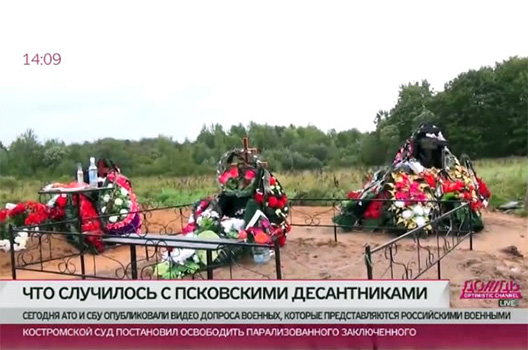 Russian military officials stood at a cemetery surrounded by forest in far northwestern Russia, early Tuesday morning, and carefully vetted the army officers, soldiers and family members arriving for a funeral to be held in secrecy. Two paratroopers from Russia’s 76th Airborne Division were to be buried. They died last week – no one would say where or how – just a day or two after President Vladimir Putin decorated their unit for “carrying out combat missions with courage and heroism.”

Putin was silent on what that mission is.

When Lev Shlosberg, the local representative to the provincial legislature, showed up at the cemetery, the officials barred him from entering. His presence had not been pre-approved by the officers in charge, they said, so he would have to leave, Shlosberg told Russia’s independent internet television channel, Dozhd (“Rain”) TV. The secret funeral was one of an unknown number (at least seventeen have been reported in Russian media so far) for the troops that the Kremlin declares do not exist: the Russian invasion force fighting in southeastern Ukraine.

The funeral was one of several reported by an independent regional newspaper, Pskovskaia Guvernia, and other Russian media, around the northwestern city of Pskov, where the 76th Airborne is based. As Russia has committed more of its regular army troops to combat Ukraine’s army, the numbers of Russian dead are secret, but they are rising. And that is raising new questions in Russia – such as that of Pskovskaia Guvernia writer Aleksei Semeyov, who asked in print why Russia is hiding the deaths of its sons and the war in which they were killed.

Russian journalists – from Dozhd, Novaya Gazeta and two other independent news sites – visited another cemetery in the Pskov countryside where funerals of Russian soldiers had taken place, and found family members and mourners reluctant to speak. Many military personnel were present, they said.

Also present were unidentified young men in hooded track suits who attacked and threatened the journalists over their efforts to learn about the funerals and the deaths. “There are many swamps around Pskov, they will never find you” said one to Vladimir Romensky of Dozhd. Later these same men chased the journalists’ car, threw rocks and punctured their tires. In a video of the attack shown on Dozhd, the anxious journalists flee the attackers on a desolate forest road as they frantically call the police for help.

One day after those funerals, Dozhd correspondents went back to that cemetery and found that all funeral wreaths as well as the name plates had been removed from the new graves, leaving only the crosses.

Russian bloggers began pointing out that many social network pages of soldiers from the 76th Airborne had gone silent – no new postings – about ten days earlier.

Ukrainian military representatives say the soldiers died fighting its army near Luhansk.  Following a battle there on August 16, Ukraine’s military published identity papers and other military documents it had captured from the Pskov division. Russian Foreign Minister Sergey Lavrov has dismissed such evidence as fake.

Ukraine captured four Russian soldiers from a separate unit, the 98th Airborne Division, saying it had found them about twenty miles inside the country. When it published their statements in videos saying they had been sent to invade, President Putin said they had wandered across the border by mistake, or simply had gotten lost.

Several days before the funerals around Pskov, Russian Defense Minister Sergey Shoigu flew to the city to decorate the 76th Airborne with the Order of Suvorov, a decoration in honor of Count Alexander Suvorov, a tsarist-era Russian general who purportedly never lost a battle. Putin issued an executive order conferring the award on August 18, saying that it was for “carrying out combat missions with courage and heroism.”

Following the award ceremony, photos of which appear on an independent Belarusian news site, Defense Minister Shoigu reportedly met with the mothers and widows of Russian soldiers behind closed doors.

The Russian media site RBC cites Sergey Kryvenko, a member of the Presidential Council for Civil Society and Human Rights, as saying that the council is receiving countless inquiries and complaints from soldiers’ parents, who say they have lost contact with their sons since they were sent to Rostov, the southwestern Russian city that has been a staging point for Russia’s assault on Ukraine. Kryvenko says they are receiving such complaints from all over Russia: Kuban, Dagestan, Astrakhan, Chechnya, Stavropol and other cities.

Ella Poliakova, the chairwoman of the St. Petersburg chapter of the Russian Soldiers’ Mothers Committee, an NGO dedicated to protecting the rights of draftees, told Dozhd that about a hundred wounded soldiers were recently admitted to a military hospital in St. Petersburg and that military hospitals around Rostov are overflowing with wounded.

Poliakova, also a member of the Presidential Council for Civil Society and Human Rights, together with Kryvenko has sent an official request to Russia’s main prosecuting agency, the Investigative Committee, asking it to investigate the unexplained deaths of nine Russian soldiers from the Dagestan region whose funerals also were held in secret, she said.

Amid the Kremlin’s grip on most Russian news media, the questions of family members – about where, how and why their men died – are not being addressed openly. But the few remaining independent media, such as Dozhd, the website Slon, and the newspaper Novaya Gazeta, appear to be pursuing the story of these secret dead, which may finally bring public attention in Russia to Putin’s unacknowledged war in Ukraine.

Image: Graves of Russian soldiers from the 76th Airborne Division were shown by Dozhd TV with the caption "What Happened to the Pskov Paratroopers?" (Screenshot from Dozhd TV)