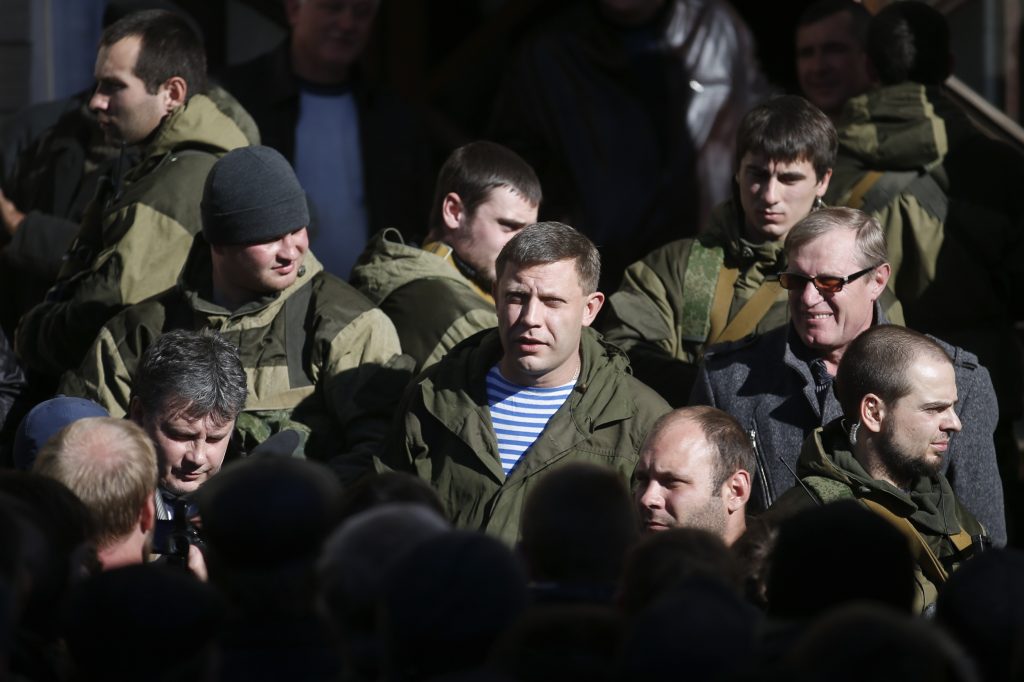 The Russian-backed, miniature, “people’s republics” declared in southeastern Ukraine are preparing to elect parliaments and heads of state on Sunday, a step backed by Moscow to consolidate their self-declared statehood. Those elections promise to further undermine the already wobbly political deal that underpins the half-effective ceasefire in the war. Does that increase the risk of a new surge in fighting?

The ceasefire is part of the Minsk Protocol, a Sept. 5 agreement signed by Russia, Ukraine, the OSCE and representatives of the Donetsk and Lugansk people’s republics. The protocol is written as a roadmap for restoring Ukrainian control over the southeast. It provides for the removal of “illegal military formations,” the re-establishment of Ukraine’s control over its territory and its border—and (Ukraine’s concession) a special status, with extra local government powers, for the region. It also calls for “the holding of early local elections in accordance with the Ukrainian law” to establish that special status.

The ceasefire already is in trouble. Gun battles, mortar shelling and other combat continues on a daily basis, and killed more than 330 people in the truce’s first month, the UN human rights agency said in early October. Western journalists have met Russian troops deployed in Lugansk, despite Moscow’s denial it has sent its forces in. Disparate Militias continue to rule the Russian-controlled zone (Donetsk’s prime minister and leading candidate to become head of state is the commander of one such militia, called Oplot.)

The planned Nov. 2 “holding of ‘presidential’ and ‘parliamentary’ elections, called by the self-appointed authorities, would run counter to the letter and the spirit of the Minsk Protocol and disrupt progress towards finding a sustainable political solution,” the European Union said yesterday. “The EU would not recognize them. We urge Russia to use its influence to help pave the way towards local elections in accordance with the Ukrainian law,” it said. Ukraine’s government and the US also have criticized Russia’s announcement

While Moscow effectively sponsored the creation of the two “republics,” by covertly sending fighters, military commanders, intelligence officers and civilians to organize them—and regular army troops to block Ukraine’s army from defeating them—it has carefully modulated its official pronouncements on their behalf. It backed their elections this week in what was one of its strongest formal expressions of support.

The Donetsk and Lugansk republics “emerged there spontaneously” in opposition to last winter’s pro-democracy, pro-Europe protest movement in Kyiv, which overthrew the corrupt President Viktor Yanukovych, Russian Foreign Minister Sergei Lavrov said in an interview. Now, Sunday’s elections “will be very important in legitimizing these authorities,” he said. “We expect the elections to proceed as planned, and we will certainly recognize the results,” Lavrov told Russian state-owned media.

A Challenge to Compromise

Lavrov’s declaration is “a shot across the bow not just of [Ukrainian President Petro] Poroshenko but of, also, the EU,” said the Atlantic Council’s Eurasia Center director, John Herbst. “Because according to the Minsk process … the only elections that can take place” in the Russian-backed zone “are elections under Ukrainian law. If they take place November 2, they’re taking place without Ukrainian law, without Ukrainian approval. So it’s a clear challenge to the whole Minsk process,” Herbst said in a conference call Wednesday with Atlantic Council members.

Effectively, Putin and the European Union each now seem to have backed the Minsk negotiations to give the other an “exit ramp” from its position. “If the Minsk process is designed to allow Putin a face-saving way to withdraw from the east of Ukraine … and allow the government of Ukraine to have control over its border with Russia … and have control over the territories in the east, albeit there’d be some special rights for self-government in parts of the east, this process could work,” Herbst said.

But “Mr. Putin’s game was to use the Minsk process, to use a certain diminution of military activity on the Russian side … as a cover for the EU to say ‘Okay, it’s now time for us to ease sanctions” against Russia, Herbst said. “But [German Chancellor Angela] Merkel and [French President Francois] Hollande were tough with Putin last week [at a summit meeting] in Milan. … And that’s why he said he’s going to recognize” the Lugansk and Donetsk elections. Herbst has noted that, following setbacks, Putin often has responded aggressively. Ukrainian officials say they are wary of the risk that Russia could attempt a military offensive across southern Ukraine to establish a land supply route to theCrimea, which it occupied beginning in February, but has had trouble sustaining with basic needs.

As in plebiscites the two republics held in May to buttress their formation, “people will come out in reasonable numbers and vote,” Atlantic Council Senior Fellow Adrian Karatnycky said on the conference call. But “the overall process is corrupted” by being held in an atmosphere of “military intimidation” by the Russian-backed militias that control the republics, he said.

Image: Donetsk militia commander and prime minister of the ‘Donetsk People’s Republic’ Alexander Zakharchenko, center, visits a coal mine October 29 as he campaigns to be elected head of state. (Reuters/Maxim Zmeyev)