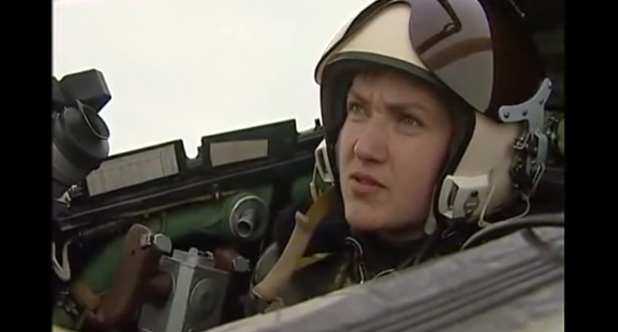 Nadiya Savchenko Will Refuse to Submit to ‘Illegal’ Exam, Her Lawyer Says

A Russian court has sent Ukrainian soldier and pilot Nadiya Savchenko for a “forensic psychiatric evaluation” at the Moscow institute where Soviet authorities for years performed abusive treatments on political dissidents. Savchenko says she will refuse to submit to the examination, which she condemns as illegal, according to a hand-written statement made public by her lawyer.

Savchenko, thirty-three, has been sent to the Serbsky Center, which during the Soviet era subjected dissidents to punitive psychiatric treatments that included psychotropic drugs administered under false diagnoses of schizophrenia or other mental disorders. Savchenko, a soldier noted in Ukraine for her campaign to become the country’s first air force pilot, was captured in Ukraine in June by one of the Russian-sponsored militias fighting the government there. She then was transferred across the Russian border in handcuffs with a sack over her head, she says. Russia says she entered the country voluntarily as a refugee and then was arrested on charges of having helped to kill two Russian journalists who died in a mortar barrage amid the Ukraine war.

In an open letter to the world psychiatric community, a group of Ukrainian psychiatrists, including former Soviet political prisoner Semen Gluzman, have called on colleagues to protest Savchenko’s examination. ”We, Ukrainian psychiatrists, remember the recent history of declaring healthy people mentally ill behind the walls of the Serbsky Institute in Moscow. We also know about new cases of political abuse of psychiatry in the Russia of today” the psychiatrists write.

Last October, the Russian newspaper Izvestiya quoted a prominent Russian psychiatrist as saying that political uses of his profession had been revived in Russia. Savchenko’s lawyer Mark Feygin has challenged the court’s transfer of his client to the Serbsky Center.

Savchenko’s latest court hearing, at the end of August, extended her detention until October 30. For the first time since she was brought to Russia, Savchenko was present, in a glass enclosure. Savchenko has not been heard from publicly since a video was released in June by her Russian-backed militia captors. It showed her sitting, handcuffed to a pipe, calmly responding to her interrogators.

Savchenko next surfaced at the prison in Voronezh, where on July 9 Russia’s Investigative Committee announced charges against her of complicity in the killing of the journalists. The committee, Russia’s main prosecutorial agency, alleges that Savchenko discovered the location of TV Rossiya journalists Igor Kornelyuk and Anton Voloshin and gave it to Ukrainian fighters who then targeted the men.

At Voronezh, Savchenko for weeks was denied any contact with Ukrainian consular officials. The Ukrainian consul was allowed to see her only after seven requests were rejected. After he publicized her account of having been abducted from Ukraine to Russia, he has not been allowed another visit.

Russia is holding several other Ukrainians on terrorism charges after they protested Russia’s invasion and seizure of their native Crimea. Oleg Sentsov, a filmmaker, Oleksandr Kolchenko, Gennady Afanasyev and Oleksy Chirny all were all arrested in Crimea and transferred to Russia. Chirny has been subjected to psychiatric examination at the Serbsky Center, over which the Polish-based human rights group Open Dialogue has voiced concern.

Ukrainian Prime Minister Arseniy Yatsenyuk met with the president of Amnesty International over the weekend and called on him to help free Nadiya Savchenko and other Ukrainian nationals illegally imprisoned in Russia.

Image: Nadiya Savchenko trains for her pilot's certification in an image from a 2012 Ukrainian military documentary. (Ukrainian Defense Ministry TV)