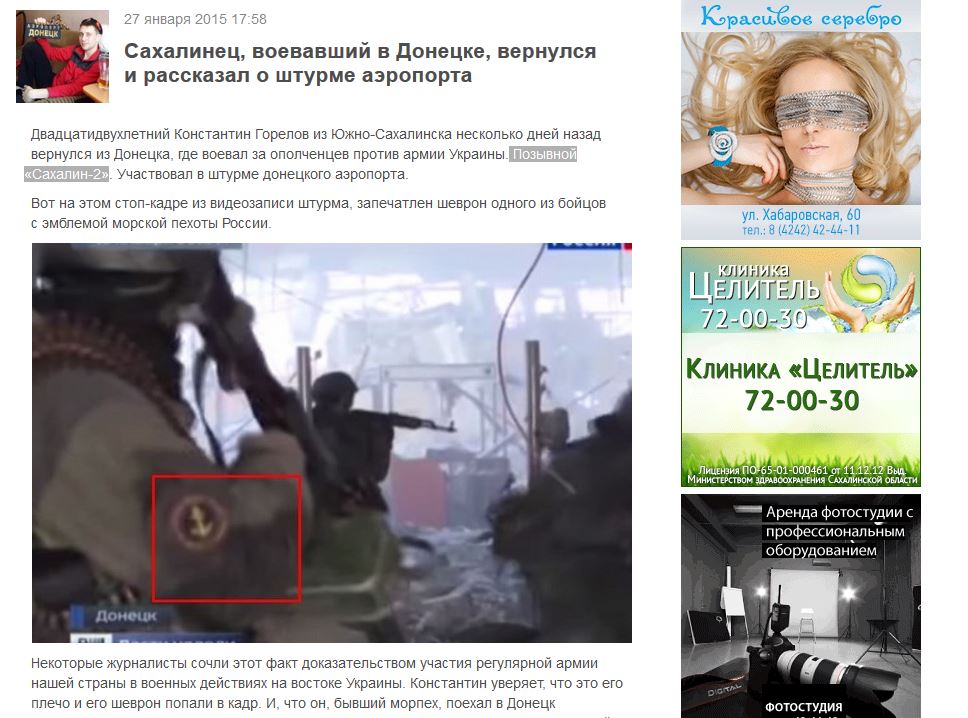 Troops from Russia’s Pacific Far East Region Are Prominent in a War 4,200 Miles to the West

The Russian island of Sakhalin, in the Pacific Ocean just north of Japan, is fully a continent away from the war raging in southeastern Ukraine. But Konstantin Gorelov, a 22-year-old, active-duty Russian naval infantry commando, made the 4,200-mile trip as a “vacation” to join other members of his force in the intensive battle this month over the international airport in Donetsk.

Gorelov’s account, in an interview with a Sakhalin-based website, CitySakh.ru, confirms reports by Ukraine, NATO, and news media that active-duty Russian troops were key in the seizure of the airport from Ukrainian forces. In the Donbas war, “there are a lot of Russian military, they are not very visible, but they are working quietly and effectively,” Gorelov says. He gives few details about how he took leave from his marine unit in the Pacific to join the battle, saying simply that he was recruited by a fellow marine to go “help out the guys.” (See the full text of the interview below.)

Gorelov and other Russian marines fought in a Donetsk-based militia unit, called Sparta, commanded by a stocky, Russian ex-marine named Arseniy Pavlov. (Pavlov, who is better known in Ukraine and on the Internet by his nom de guerre, “Motorola,” has gotten press coverage not only for his fighting, but for taking a day off last July to get married in his camouflage uniform.) Sparta integrates the active-duty Russians so efficiently that, Gorelov says, the militia received him in Donetsk on December 25 and sent him, armed, to the front line the next day. Russian marines were filmed fighting the airport battle in their Russian uniforms.

While the Russian government of President Vladimir Putin characterizes the war in Ukraine as a spontaneous uprising by local residents against Kyiv’s rule, the rebellion has been led, armed, funded and fought by Russians who, like Gorelov, often proudly tell their stories to Russian local and regional news organizations. Last month, the main news website of Yekaterinburg, a Russian city in the Ural Mountains, interviewed a recruiter there for the war who said he was part of a nationwide network recruiting Russian ex-servicemen through veterans’ groups.

In Sakhalin, CitySakh.ru also has reported recruitment of army vets through an extreme right-wing Russian Orthodox paramilitary group, Russian National Unity (or Yedinstvo). While Russia’s Far East is distant from the Ukraine war, news agencies and war monitoring groups have reported a regular role in the fighting by Russian troops from Sakhalin and nearby regions. In July, amid the shooting down of the Malaysian Airlines Flight 17, the Associated Press quoted a Donbas rebel leader about a rebel unit near the shootdown “about half of which was made up of men from far eastern Russia, many from the island of Sakhalin off Russia’s Pacific coast.” A volunteer war-monitoring group run by Ukrainians, Georgians and others, InformNapalm.org, noted this week a continued presence of Russian units from the Far East in the Rostov region, which serves as Russia’s arena for positioning, training and inserting Russian troops into adjacent Ukraine.

In his interview, the Sakhalin marine, Gorelov, echoes the Kremlin’s official position that Russian soldiers like Gorelov may fight in Ukraine individually on their vacation time, but that Russian military units are not deployed in Ukraine. However, Russian women with the Mothers’ Soldiers’ Committees, and reports in local media such as the regional newspaper Pskovskaya Guberniya, have confirmed that Russian units also have been ordered into the Ukraine war—and that the Russian army covers up details of those killed there. And Ukraine has captured Russian troops fighting with their units in the Donbas region.

“No one is fighting on the side of the militants by orders,” Gorelov said. “That’s a lie.” Other interviews with Russian troops, and news reports from Russia, say Russian active-duty soldiers are indeed ordered, pressured or tricked into signing up for combat tours in Ukraine.

Back at home in Sakhalin, a photo shows Gorelov relaxing on a sofa with a glass of beer and smiling as he displays a war souvenir—a street sign for the Donetsk airport. The Ukrainians who defended the airport, referred to by both sides as “cyborgs” for their tenacious fighting, were drug users, Gorelov insists: “They took some kind of drugs and could only be killed by shooting them in the head.”

Asked why the Russians finally were able to oust the Ukrainians, Gorelov says they did so by fighting under rules that would not “stand up in court.”

Inside the Russian-backed offensive in Ukraine, “materially the situation there is normal,” Gorelov said, “but militarily, not so good.” Despite the help from Russia, many among the mish-mash of pro-Russian militias—which have included Cossacks, Chechens, locals, Serbs, Russian veterans, and active-duty troops such as himself—are not fighting efficiently. “If everyone fought like Sparta, they would have knocked those ukropy [a disparaging term for Ukrainians] out of the Donetsk People’s Republic a long time ago.”

Here is a translation of the article from CitySakh.ru:

A Sakhalin resident, after fighting in Donetsk, has returned and tells about the storming of the airport

Twenty-two-year-old Konstantin Gorelov from [the Sakhalin provincial capital] Yuzhno Sakhalinsk returned from Donetsk a few days ago where he fought with the Donetsk People’s Republic militants against the Ukrainian army. His code name was “Sakhalin Two”. He took part in the storming of the Donetsk airport.

A frame shot from the video of the airport attack shows a soldier with a Russian marine arm patch on his sleeve.

Some journalists considered this proof of Russia’s regular army units participating in the war in eastern Ukraine. Konstantin claims that it is himself in the video wearing the patch and that he, a marine, went to Donetsk on his own behalf during his vacation time. He also does not deny that the Russian army is participating in the war in eastern Ukraine in some way.

When did you arrive in Donetsk oblast and what was your purpose. How did your family and friends react to your decision to go to war?

I arrived in Donetsk on December 25. I went simply because I wanted to help the guys. I don’t know what got to me. I told my family and friends that I was going to Thailand for a holiday. But when I flew to Donetsk and ended up on the battlefront, I sent my mother all kinds of photographs with weapons. It was clear from those where I was.

They didn’t try to talk you into coming home?

They did. But I didn’t care, all the more so as I was there during my holiday time.

Tell us how you were received there. Were you issued weapons immediately? What’s the militants’ situation in Donetsk?

I went there following one of my work colleagues. He gave me the contacts for “Vokh”, he’s “Motorola’s” deputy. [Motorola is the nom de guerre of Arseniy Pavlov, a former Russian marine who commands a force within the army of the “Donetsk People’s Republic.”] I called him while still here and told him I was coming. They met me and the next day armed me and sent me to the front line. Materially the situation there is normal, but militarily, not so good. If everyone fought like Sparta, they would have knocked those ukropy [a disparaging term for Ukrainians] out of the DPR a long time ago.

You participated in the attack on the airport.

Yes, of course. But my Sakhalin friend is even cooler, he stormed cities.

Tell us about the offensive on the airport. For a very long time, they were unable to capture it. How were they successful this time?

As far as I know they never tried to take the new terminal. They took it in about three-four days. They called the Ukrainian army “cyborgs” because they took some kind of drugs and could only be killed by shooting them in the head. We stormed the airport right after the city was bombarded. They were isolated on the third floor and in the cellar. Well, we smoked them out.

So what was the reason for this success? A combined militant effort, reinforcements, weapons, an opportune moment?

Who the hell knows? It’s just that the army is very rigid in thinking (and does things half-assed and backwards—roll what’s square, wear what’s round) and there are always orders. But here we have commanders who don’t care about orders, they wouldn’t stand up in court, and they fight how they want to fight. That’s probably why.

What do you think can end this confrontation? What needs to happen for the militants to win this war?

Kill [Ukrainian President Petro] Poroshenko, [Prime Minister Arseniy] Yatsenyuk, shoot a Grad or a Buratino missile into the Ukrainian parliament when it’s in session so they wake up and put themselves in the place of the peaceful people of the Donbas. This confrontation definitely will not end until the militants completely liberate the Donbas. Yeah, militants. They all have military [ID] cards, some even have two. This is not some rabble who are running from the Russian law, this is “regular army”. Well, kind of.

– And what about the claim that career Russian military are fighting on the side of the militants, is this true, or a lie?

No one is fighting on the side of the militants by orders. That’s lie. And so there are a lot of Russian military, they are not very visible but they are working quietly and effectively.

What then is the work of the Russian army?

I don’t really know. Probably intelligence. They are fighting under the cover of the militants.

How did you feel there psychologically?

In the beginning I was in shock.  I asked myself: Why did I come here? But later, as I got used to it and drawn into it, it was hard to tear myself away. I have a loan to pay back here and I don’t want to dump all this on my mother.

What do your friends and family think about this trip of yours?

Some think I’ve lost my mind, others think I’m a hero. My family approved but said they won’t let me go anywhere. But then, I’m not going to ask them.

Konstantin is currently resting and getting ready to go back to work. The Citysakh.ru editorial board will not pass judgment on the actions or statements of this man, let our readers judge for themselves. This interview and the included photographs are published with the agreement of Konstantin Gorelov.