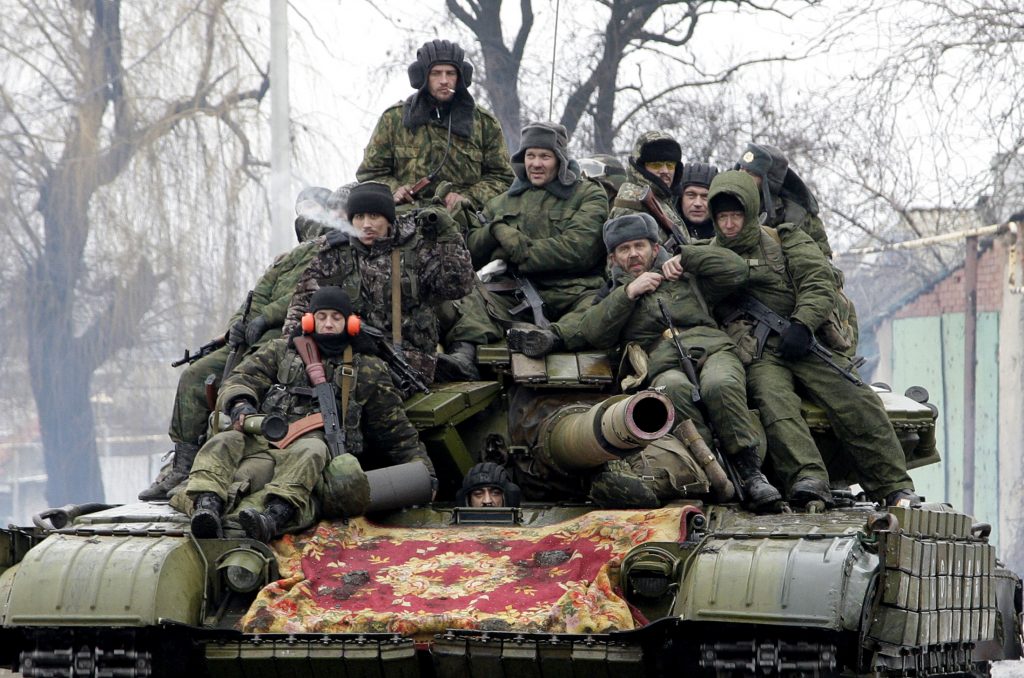 A “substantial number” of Russian Federation special forces troops led this week’s capture of the Donetsk airport amid what appears to be Russia’s biggest direct military offensive in Ukraine since last summer. The offensive, by thousands of Russian troops, appears aimed at least in part at forcing a re-negotiation of the September cease-fire agreement, which has proven an obstacle for the Kremlin in its key goal: constraining Ukraine’s pursuit of closer ties with Europe and the West.

After months of intense, high-explosive combat amid the ruins of southeastern Ukraine’s main airport, Russian special forces commandos this week led the attacks that killed or drove back the Ukrainian troops and national guardsmen that both sides had dubbed “cyborgs” for their tenacious, defense of the airport’s main buildings, according to Atlantic Council analyst John Herbst. The Russian special forces are fighting at the airport “in substantial numbers,” said Herbst, a former US ambassador to Ukraine who returned this week from a talks with Ukrainian and Western officials in Kyiv and Brussels.

In recent weeks, Russia has boosted its troop numbers inside southeastern Ukraine’s Donbas region to about 9,000, Ukrainian President Petro Poroshenko said this week in a speech at Davos, Switzerland. Ukraine’s intelligence services routinely monitor Russian military movements across the stretches of the Ukraine-Russia border that are under the effective control of Russian forces.

Along with NATO, which uses satellite surveillance of the same area, Ukraine has reported what Herbst says is “a massive re-supply of Russian heavy equipment – tanks, armored personnel carriers, missile systems – into Ukraine over the past month. Obviously, these are all things that were stocked for the offensive that we’re seeing right now.”

The new offensive follows what has been a creeping seizure of territory “since the putative cease-fire was agreed to in early September,” said Herbst, who directs the Atlantic Council’s Dinu Patriciu Eurasia Center. “The Russians and separatist forces have captured another 500 square kilometers of Ukrainian territory”—about 190 square miles, about three times the area of Washington, DC. “So the cease-fire violations [by the Russians and their proxy forces] are not just in shooting but in seizing land,” Herbst said in an interview.

“Another key takeaway” of his talks in Kyiv “is the cost of the war to Ukraine,” Herbst said. “Ukrainian security officials we spoke to said Ukraine is spending $6 million to $7 million every day, just to maintain their forces in the east to oppose the Kremlin’s aggression.”

Ukrainian military officers in Donbas told the New York Times this week that Russian troops also are spearheading a drive in Lugansk province that seized border checkpoint from Ukrainian troops and villages north of Lugansk city.

The Russian offensive’s immediate territorial goals are unclear. Alexander Zakharchenko, a Ukrainian who is the declared prime minister of the Russian-sponsored Donetsk People’s Republic, told Russian news agencies today that the Russian-backed forces would re-capture all of Donetsk province (an objective he has declared for many weeks). Ukraine last summer pushed the Donetsk separatist forces out of the northern half of the province before the Russian army deployed its own paratroopers, tanks and artillery units to halt their advance.

Some military analysts, notably Georgetown University professor and former Pentagon strategist Philip Karber, have warned that a new Russian drive into Ukraine was likely in the spring. US government analysts in Washington have told the Atlantic Council in recent weeks that Russia might move in the winter, rather than wait for spring, in part because it has a tactical advantage over Ukraine with its greater transport and logistical capacities amid snow and freezing temperatures.

Whatever Russia’s immediate aims in a winter offensive, President Vladimir Putin’s strategic need is greater military leverage against the Ukrainian government than that permitted him under the September cease-fire accord. That deal confined the Russian-led forces to only the southern half of the Donbas region, and has failed to deter the government in Kyiv from pursuing its closer association with the European Union and the West. Putin has insisted that Ukraine must remain in the Russian sphere of influence and join a Russian-led economic bloc that is a centerpiece of Putin’s strategy for maintaining Russia’s long-term security and economic future as the dominant power in Eurasia.

Amid the Russian offensive this week, German officials reported that Russian Foreign Minister Sergei Lavrov had agreed with his German, French, and Ukrainian counterparts on a plan for both sides to pull their heavy weapons back from the line agreed in the September 5 cease-fire deal, signed in Minsk, Belarus. Russia denies that it has troops in Ukraine or that it is the financial and military backer of the Donetsk and Lugansk “people’s republics.” Those entities were created and are sustained by Ukrainians opposed to the “fascist” and “neo-Nazi” government in Kyiv, the Kremlin says.

To journalists in Davos, Lavrov on January 21 re-stated Moscow’s denial that it has sent weapons or troops, or that it has any other direct involvement in the war. “I say every time: If you allege this so confidently, present the facts. But nobody can present the facts, or doesn’t want to,” Lavrov told a news conference before heading to the peace talks in Berlin with the foreign ministers of Ukraine, Germany and France. “So before demanding from us that we stop doing something, please present proof that we have done it,” Lavrov said.

In fact, a wide base of reporting from Ukraine and Russia—including independent reporting by Western and Russian journalists; by non-government organizations including the Russian committees of mothers of soldiers and the Russian director of the Red Cross in Moscow; by international and Russian human rights groups and activists; and by Russian citizens and soldiers posting their stories and pictures on social media sites—have documented Russia’s provision of weapons; its deployments of troops; the deaths of its soldiers on Ukrainian battlefields; its government’s support for Russian military veterans’ recruitment as mercenaries; the presence of its (Cossack and Chechen) paramilitary forces in Ukraine’s war; and other elements of Russia’s role. Many such reports also have detailed the censorship, beatings, and legal actions by the Russian government to suppress the evidence that Lavrov said had never been offered. Some of those reports, as compiled by the Atlantic Council, include these:

‘No Russian Troops in Ukraine?’ They Were Just Drinking Vodka With Reporters!  (Oct. 24)

Russians Protest Putin’s War, But Ukraine Is on Its Own (includes 10 ways in which the evidence—much of it from Russians themselves—refutes Putin’s claim he’s not making war on Ukraine – Sept. 22)

How An Agent From Moscow Builds Greater Russia, One Province at a Time (May 22)

Image: Soldiers of the Russian-backed Donetsk People's Republic ride a tank on the outskirts of Donetsk, January 22, 2015. Russian servicemen’ groups recruit Russian active-duty and former Russian soldiers as paid “volunteers” who form what Ukrainian officials say is the bulk of a proxy Russian army. Russian troops this month have made their second major combat drive to sustain the proxy forces in the war against Ukraine’s army. (Reuters/Alexander Ermochenko)