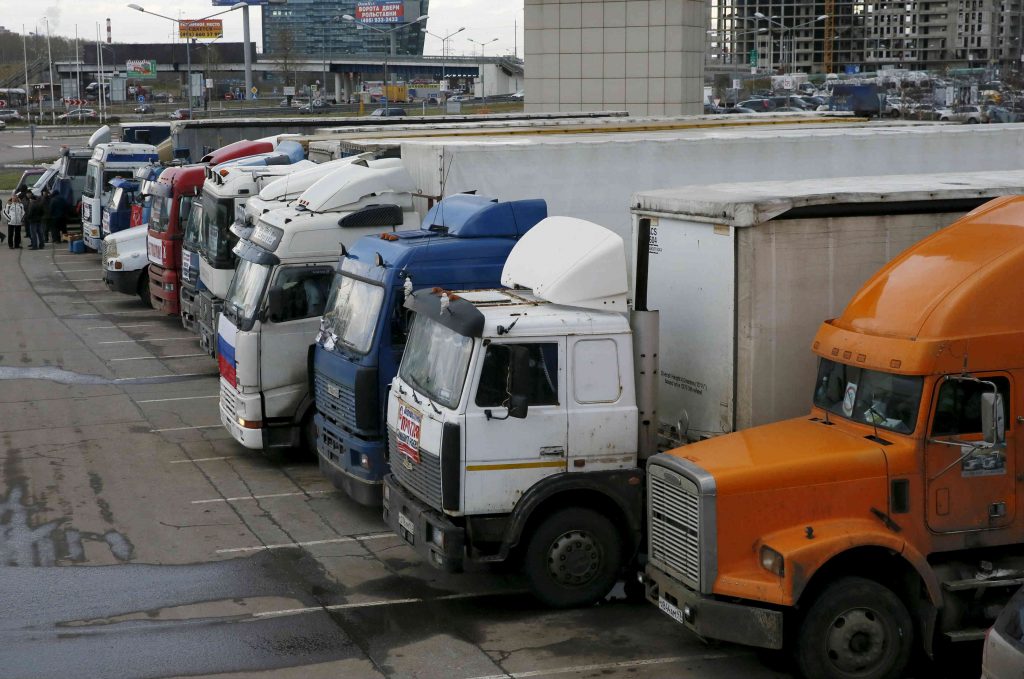 Hundreds of long-haul truck drivers have blocked Russia’s roads to protest a new national toll. The protest may cause changes in Russia’s political landscape and economic policy in the long-run, though its impact will be limited in the short-term. Even still, the protests are significant because they demonstrate an awakening of the Russian population and are the first major protests since 2012.

Truck drivers are angry at Igor Rotenberg, the son of one of Putin’s cronies, who owns half of a GPS-based system that, when operational, will charge truck drivers tolls on all federal highways. Drivers must buy a tracking device and pay according to their mileage. The new toll amounts to about 10 percent of truckers’ revenue, the New York Times reported. The system was launched on November 11.

The system has major problems: it hasn’t assessed tolls correctly and it has calculated routes in non-optimal ways that don’t allow drivers to change their routes without huge penalties. In addition, the operator has not built enough offices to communicate with clients and often lacks necessary equipment. Even though the new system only functions in the Moscow region for now, there have been spontaneous protests in forty-four of Russia’s seventy-nine regions. There aren’t any reliable statistics on the number of participants involved, but the media puts their number in the thousands.

Trucks play an important role in the Russian economy mainly for small- and medium-sized businesses. Russian railways are slow and not client friendly if a business needs to deliver a small amount of cargo. Experts say that approximately half of truckers are employed by transportation companies, while individual truckers whose number near several hundred thousand make up the other half.

As the Russian economy declined in 2014-2015 and imports shrunk by 40 percent, the demand for truck drivers and prices for their services declined significantly and their incomes fell. The new tax hurt mostly individual drivers, who have no way to translate additional costs into higher wages as there are huge extra capacities in the market. Individual truck drivers have to either accept the drop in income or quit.

Russian roads rarely have more than two lanes in one direction, so the slow movement of even a small number of trucks can cause massive traffic jams. But the police found ways to effectively destroy truckers’ columns while small protests even in a large number of regions had no impact in Moscow.

A few days later, the truckers moved to Moscow. On December 4, a few hundred truck drivers tried to block Moscow’s MKAD ring road, which lasted several hours, but due to the small numbers, it was not very effective and the police pushed the trucks into parking lots, thereby clearing the road.

When the protests started, it seemed they might become political—the slogan “Russia without Rotenberg” was one of the most popular—but truckers limited their demands to their personal economic interests. Truck drivers consciously de-politicized their stance, refusing to accept the support of any political parties. The only demand today is to abolish the pay-per-mileage tax.

Although truckers’ actions have not led to any massive transportation collapse, the Russian government quickly made some concessions. The tax was reduced twice, fines have been diminished, and the Ministry of Transportation launched an evaluation of the new system and promised to suspend it and impose sanctions on the operator if defects are confirmed.

But the protests have lost momentum: trucker drivers are blocked by police and the number of protesters is not growing. The protests are supported by an active part of society—71 percent of Moscow residents support the truckers’ according to the Levada Center—but they lack bright leaders and don’t want to be affiliated with political interests. After some additional minimal concessions by the government, these protests will likely fade.

The significant decline in living standards in Russia is the real reason behind the protests, and discontent will gradually increase. Pensions will be indexed by only 4 percent while annualized inflation hovers at 15 percent. Public sector and military wages will be frozen as well. United Russia will likely receive a low percentage of the vote in the 2016 parliamentary elections under the proportional part. United Russia will certainly get the vast majority of seats in majority districts, while the biggest parliamentary parties—who will become beneficiaries—can hardly be called a real opposition. More political intrigue is inevitable.

In the lead up to the 2018 presidential election, the Kremlin may relax its macroeconomic policy and increase pensions and private-sector wages. Otherwise, Russian President Vladimir Putin can expect a nasty surprise at the voting booth.

Sergey Aleksashenko is a Senior Research Fellow at the Center for Development, Higher School of Economics, in Moscow.

Image: Drivers stand in front of their trucks, as they take part in a protest against a new fee, at a parking lot in the Moscow region, Russia, December 8, 2015. As of last month, the state has started charging a fee for every mile that trucks over 12 tons in weight drive over Russian roads. Credit: REUTERS/Maxim Shemetov