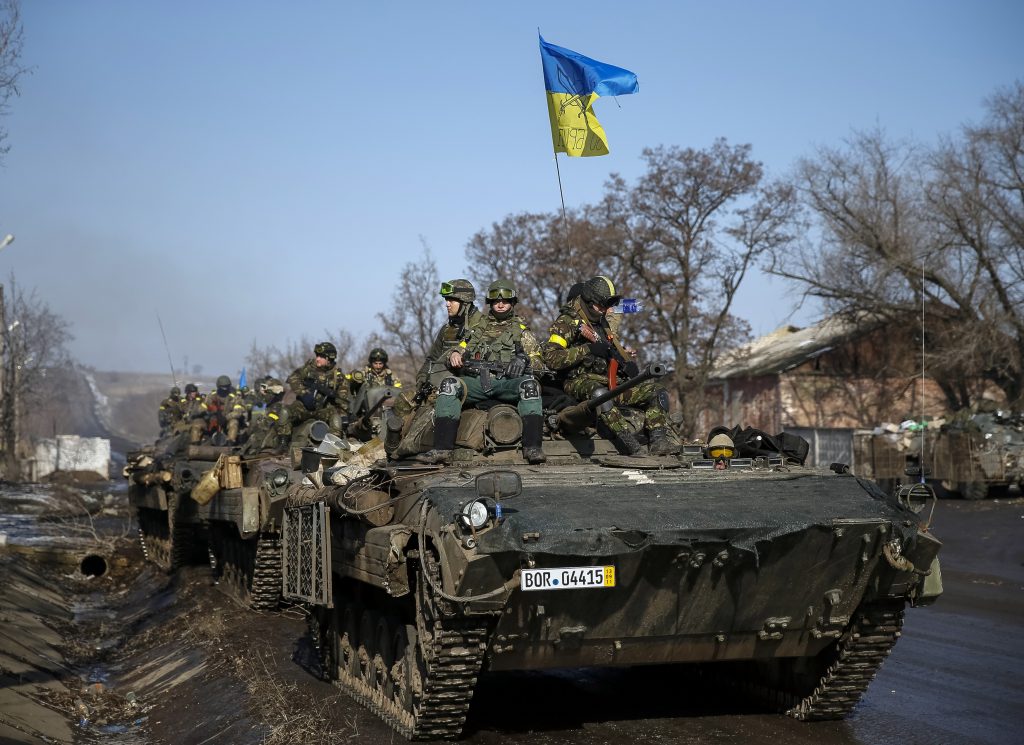 With thousands of Ukrainian troops nearly surrounded in Donbas by the freshly armed, Kremlin-directed rebel militias, Ukraine’s President Petro Poroshenko accepted the Minsk II agreement February 12. The new accord is clearly less advantageous to Kyiv than was the Minsk I agreement, which Moscow has openly flouted since its signing last September.  This diplomatic victory for Moscow reflects Russia’s advances on the battlefield, which have weakened Ukraine’s position steadily since September, but especially in the last few weeks.

The reason for Ukraine’s setback is simple. In violation of the Minsk I accord, the government of Russian President Vladimir Putin has been funneling arms and fighters into Donbas. This flow picked up substantially since early December. In addition, the Kremlin has used its hundreds of active-duty military officers in Ukraine to establish much stronger command and control over the armed rebels. With these advantages, the Russian proxy forces launched an offensive in early January that has included the near-entrapment of Ukrainian forces at Debaltseve, a strategic town between the region’s main cities, Lugansk and Donetsk.

In this predicament, President Poroshenko made a number of significant concessions. The most important was accepting a delay until the end of this year for Ukraine to regain full control of the Russian-Ukrainian border. Under Minsk I, Ukraine should have been ceded control of its border from day one, a control to be verified by monitoring teams of the Organization for Security and Cooperation in Europe. Moscow has never permitted that step, which would remove its principal means of placing pressure on Kyiv: the constant re-supply of Russian arms and fighters in the Russian-controlled bastions of Donbas, which enables the Kremlin’s agents to seize more territory.

While Minsk II is arguably better for Ukraine than the recent status quo, it can be seen to legitimize Russia’s takeover of Ukraine’s border through the end of the year. Over the next ten and a half months, the Kremlin can pour in a great deal of heavy weaponry. While Minsk II calls for the withdrawal of foreign hardware and fighters, that is an empty promise, for there will be no one at the border to enforce it or prevent new matériel from coming in. [An unusually large Russian force—of about fifty tanks, forty rocket launchers and forty armored vehicles, entered Ukraine in the overnight hours before the new truce was signed, Ukraine’s National Security Council said today.]

This truce deal includes other problems. The Russian-sponsored “separatists” get to control the territory—more than 190 square miles (500 square kilometers), larger than the city of Donetsk—that they have taken in violation of the first cease-fire. An agreement to withdraw heavy equipment covers artillery and missiles, but not tanks, which Russia has deployed in Donbas to great effect.

Also, Ukraine’s government will be required to win the consent of Moscow’s “separatists” for mandated constitutional changes that give the Russian proxies greater powers in Ukraine’s governance. This can let these small, Russian-dominated areas of Ukraine bid for some control over major areas of Ukrainian policy, including national security matters.

Finally, the ceasefire only goes into effect only on February 15, which means that Moscow’s agents in the Debaltseve area are given two and a half days after the signing of the agreement to continue their assault on the Ukrainian military and seize the city.  According to our European interlocutors, the “separatists” in the talks initially rejected the immediate ceasefire that all the other parties had accepted. President Putin then “persuaded” his agents, in a Kabuki act that would be appreciated in Tokyo, to accept the February 15 date.

Has Kyiv Averted a Battlefield Defeat?

Even with the danger to his military, President Poroshenko still needed some persuading to agree to the weaker Minsk II formulations.  While not wanting to push for him to make a deal that would disadvantage the Ukrainian victim, German Chancellor Angela Merkel and French President François Hollande were certainly relieved to see the agreement emerge.  And we understand that the Ukrainian president’s difficult decision was made easier by the surprise message during the February 12 negotiations from the International Monetary Fund’s managing director, Christine Lagarde, that the financial package Ukraine so desperately needs was approved.

Despite all the flaws in Minsk II, Mr. Poroshenko may have been wise to approve it. If his troops manage to hold out until February 15, the ceasefire may have averted a major military setback.

What is more, to deal effectively with Russian aggression, President Poroshenko needs the support of both the United States and major European powers. His decision to accept the ceasefire was certainly appreciated by Chancellor Merkel and President Hollande. If they are quick to point out whenever the Kremlin and separatists, under cover of Minsk II, try to fortify their current holdings, bring in more military hardware and seize additional territory, they might help protect Kyiv from the weaknesses in the document.

In this regard, the fact that Ms. Merkel has expressed skepticism about the prospects for Minsk II is encouraging. It means she has come to understand that Mr. Putin often does not meet his written obligations.  It is also a good sign that Mr. Hollande has said that the first days after the signing of the agreement are critical.  This is presumably a warning to the Kremlin not to permit its allies to complete the encirclement of Debaltseve.

John E. Herbst is director of the Dinu Patriciu Eurasia Center at the Atlantic Council. He served as the U.S. ambassador to Ukraine from 2003 to 2006.