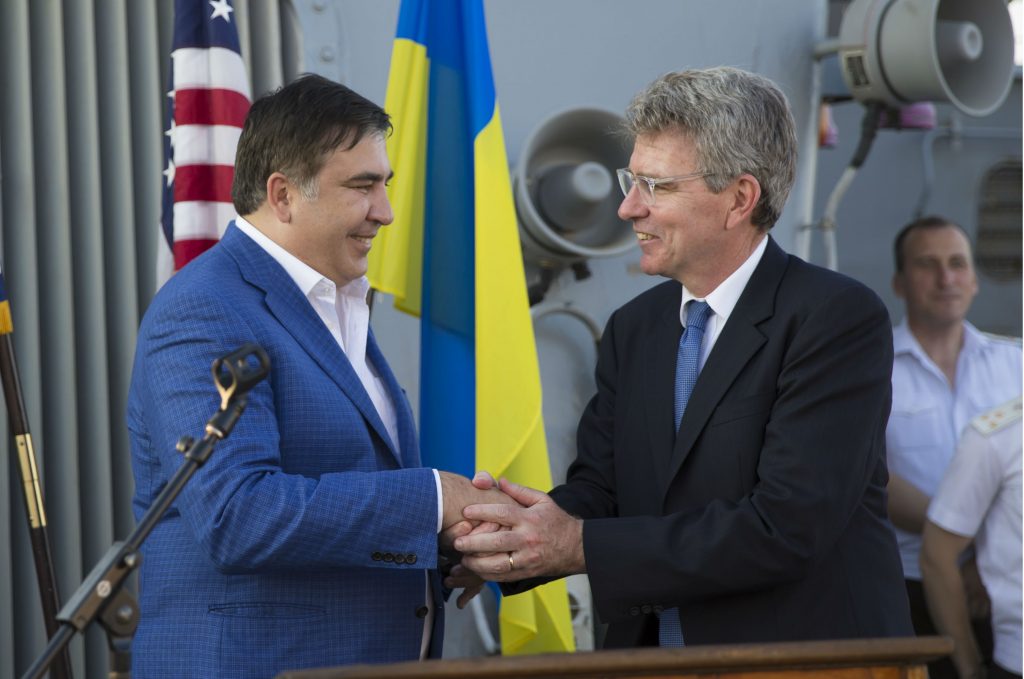 A year after my Atlantic Council blog post on Mikheil Saakashvili’s first fifty days as Odesa oblast governor, it’s time to reexamine his record. The results are mixed: his brisk and spectacular first wins soon hit the skids. The Presidential Administration’s promised support evaporated in late 2015 and Saakashvili’s many initiatives were skillfully torpedoed at every corner. Today Saakashvili is essentially locked in a stalemate against his local adversaries and has reached the ceiling of his reform deliverables. In short, Saakashvili’s time in Odesa is a microcosm painfully illustrating Ukraine’s thorny path to democracy.

On the surface, Odesa looks like a glossy magazine cover. The possible host of the 2017 Eurovision contest, its diverse cultural scene and increased investment potential are attracting a growing number of tourists and business partners. The red carpet at the Odesa International Film Festival, sunny beaches, and the bewildering variety of new shops, restaurants, and hotels make this beautiful city a living symbol of the “unbearable lightness of being.”

But scrape away the fresh paint and cracks appear. Dozens of Ukrainian soldiers are regularly killed and wounded in the ATO zone, something US Ambassador Geoffrey Pyatt acknowledged during his visit to Odesa last week. “Ukraine remains a country at war,” he said while speaking aboard the USS Ross, which entered the city port as part of the international Sea Breeze exercise.

During reception remarks aboard the USS Ross, Pyatt acknowledged Governor Saakashvili’s presence and his efforts to “arrange the spectacular weather to host the US Navy.” Looking tired and dispirited, Saakashvili turned the compliment into a joke: the central authorities in Kyiv had placed so many barriers to his reform efforts and curtailed so many of his powers, he said, that weather monitoring is all he has left.

Frenetic and sharp-tongued, Saakashvili has never minced words or hid his emotions. In a recent Novoe Vremya interview, he said, “You may argue there are no results…But I am pleased with what we managed to achieve, as under the circumstances, the results could be close to zero.”

But is Odesa impervious to reform? Why has a politician so full of energy, moxie, and ideas found the job impossible? And what does Saakashvili’s mixed record in Odesa say about the reform project overall in the country?

Lyuba Shypovych, who joined Saakashvili’s team as chief IT specialist after seven years with New York IT companies, says his team’s achievements are simply remarkable. She says there is zero tolerance of corruption in the Odesa oblast administration, where Saakashvili reduced the number of staffers from eight hundred to four hundred and replaced all of the former department heads with young, highly educated professionals. It took the new governor only three months to launch the new Odesa police force and five to open the transparent Odesa Сenter for Administrative Services.

Shypovych argues that problems start when local reformers need support from the central government. Saakashvili’s team set up the Odesa Package of Reforms initiative and submitted dozens of legislative proposals to the Verkhovna Rada, Ukraine’s parliament. Yet not a single one of those has ever been voted in—some got “lost” at their respective ministries, while others got stuck in parliamentary committees.

Saakashvili can also be proud of his Odesa customs chief, Euromaidan activist Yuliya Marushevska. She eliminated many shadow schemes and simplified customs clearance procedures. The Open Customs Space reduced administrative checks to only fifteen minutes per container. Marushevska reports that increased tax revenues will assist Saakashvili’s road reconstruction project, the Odesa-Reni motorway, which will soon connect Ukraine with Romania and the EU.

Saakashvili’s right hand man in combating local corruption, David Sakvarelidze, served only six months as Odessa oblast prosecutor. He opened several investigations into local mafia bosses, but they have all stalled. Sakvarelidze was then driven out by then Prosecutor General Viktor Shokin, who replaced him with Mykola Stoyanov. Сivic activists launched a protest against Stoyanov’s appointment and closed the Odesa-Kyiv highway to demand that Poroshenko take action. In response, the president appointed two prosecutors from his hometown of Vinnytsia as chiefs of the Odesa oblast prosecutor’s office.

But little has changed. The most visible demonstration that Odesa’s old business and political elites are holding a tight grip on power was Gennadiy Trukhanov’s shocking victory in Odesa’s October 2015 mayoral elections. Apparently he had the reliable support of two strong forces: the city’s electorate and the powers-that-be in Kyiv.

Rumored to be involved in international drug trafficking and the weapons trade, Trukhanov owns a number of offshore companies registered in the Virgin Islands. His majority in the Odesa city council is composed of his own faction, the Opposition Bloc (which includes former President Victor Yanukovych’s cronies) and the Petro Poroshenko bloc. The three factions vote unanimously on most decisions, including “package votes” on land sales and leases.

The companies owned by Trukhanov and his allies win all municipal tenders for road reconstruction projects in Odesa. One Trukhanov-linked company, Growth, lives up to its name; last year it won tenders worth $6 million; this year, its budget grew to $15 million.

The head of Odesa’s Anti-Corruption Office has argued that Trukhanov received cart blanche from Poroshenko in exchange for preventing separatism in Odesa. But there is suspicion that other business interests could be involved. In May, Trukhanov’s administration paid $1.1 million to Bogdan Motors, a company formerly co-owned by Poroshenko, to purchase new trolleys. At present, Bogdan Motors is solely owned by Poroshenko’s long-term business partner Oleg Gladkovskyi, who is first deputy chief of Ukraine’s National Security and Defense Council.

Frustrated with the Odesa “swamp” and its Kyiv protectorate, Saakashvili has started a massive anticorruption movement and called for early parliamentary elections. He says it is time to create a spontaneous wave of support that can later be transformed into a mass political force. “I’m not calling for a third Maidan, but this wave should sweep these old relations away,” he said. On June 28, Sakvarelidze announced that that Khvylia (Wave) party will be established, focusing primarily on fighting corruption.

Saakashvili hasn’t disclosed whether he plans to join the party and become its leader. But if he does, his support could provide the real wave that could push Ukraine out of its murky waters and tip the balance of reform efforts past the point of no return.

Kateryna Smagliy is the director of the Kennan Institute’s Kyiv Office.