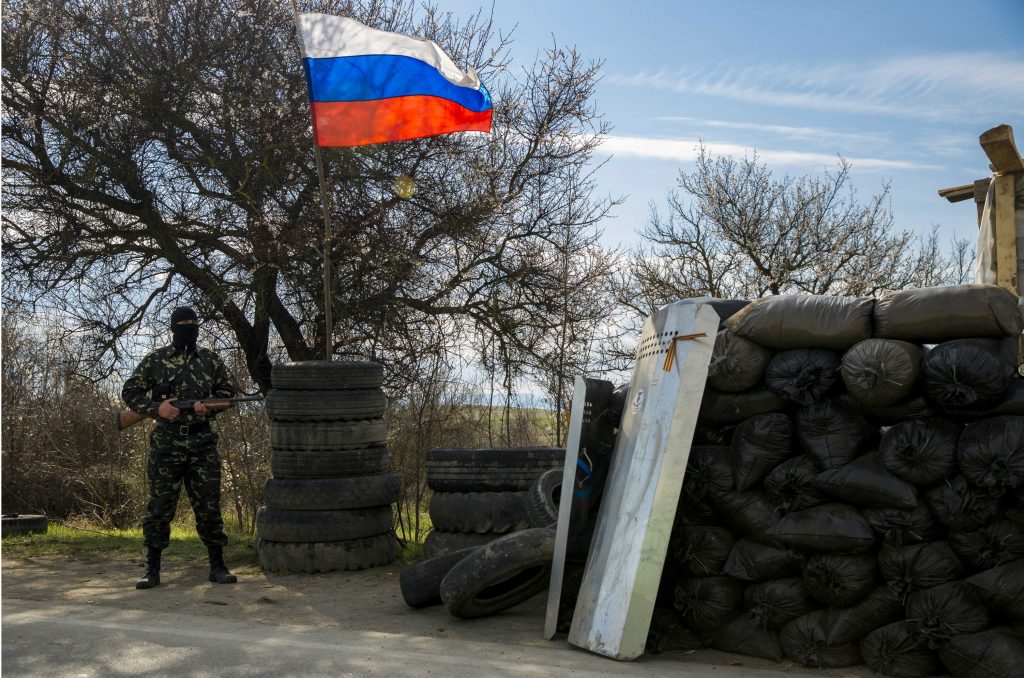 An armed member of a local self-defense unit watches traffic at a checkpoint on the highway between Simferopol and Sevastopol in the Crimean peninsula March 13, 2014. REUTERS/Thomas Peter

It has been more than two years since the European Union and the United States imposed economic sanctions on Russia for its aggression in Ukraine. How effective have the sanctions been?

According to US Assistant Secretary of State Victoria Nuland in 2016, sanctions were meant to “press Moscow to bring an end to the violence in Ukraine and fully implement its commitments under the Minsk [ceasefire] agreements.”

By that standard, they have failed. The situation in eastern Ukraine today is one of low-intensity warfare rather than a ceasefire. The far-reaching sectoral sanctions that were imposed after the Kremlin’s actions in eastern Ukraine, which targeted key Russian industries, businesses, and banks, failed to get Moscow to hold up its side of the Minsk II ceasefire agreement.

Still, there are intermediate goals, not simply full compliance, to consider: to contain Russia’s adventurism and to craft a cautionary tale in which Russia pays a high price for, and the West takes a principled stand against the Kremlin’s violation of international law and its neighbor’s sovereignty. By these measures, the medicine may be working.

Western sanctions against Russia were rolled out gradually, with the initial round in March 2014 targeting individuals, companies, and banks. In June that year, following the massive involvement of Russian troops and weapons in eastern Ukraine, the EU imposed a ban on imports from Crimea or Sevastopol and initiated a new wave of sanctions. In July, the United States imposed its first round of sectoral sanctions against Russia—financial sanctions on two banks and two energy companies—and the EU followed suit soon after.

The sanctions had three goals: to force the Kremlin to change course in Ukraine, to raise the costs to Russia of its actions in Ukraine, and to demonstrate a common Western approach to Russia’s actions.

The third objective has clearly been met. The coordination of sanctions between twenty-eight EU countries and the United States is a signal foreign policy achievement, sending a clear message to Russian President Vladimir Putin that the West will take a united stance against Russia’s invasion of a sovereign nation.

But have sanctions influenced Russia’s foreign policy? The hard truth is that Russia has achieved its goals in Crimea and created a hotbed of tension in the east of Ukraine. Meanwhile, the West has been unable to compel Moscow to fulfill the Minsk II agreement or even to acknowledge its direct participation in the conflict.

It may be true that sanctions, combined with Russian military casualties, limited Putin’s plans for military force in Ukraine. But it is a war nonetheless. Over the last two years—and since the signing of Minsk I—Moscow has taken more than 500 square kilometers of additional Ukrainian territory in small increments. Sanctions have not prevented this type of “nibbling away.”

A better question might be whether sanctions have hurt the Russian economy. Although Russia plunged into a crisis following economic sanctions that would last for six consecutive quarters, the real scale of economic shock was less significant. Western sanctions have had some effect, but much less than the impact of collapsing oil prices. GDP fell by 3.7 percent in 2015, but most experts project only a 0.6-0.8 percent drop in 2016. Recovering oil prices have allowed the ruble to stabilize, and a 15 percent fall in private consumption has not led to any visible increase in social tension, nor has it weakened support for Putin or his aggressive foreign policy.

Of the sectoral sanctions, the impact of financial sanctions is the easiest to measure. Though they cover very few banks and companies, these sanctions have become de facto comprehensive. Few Russian banks and companies were able to raise capital within the last two years, and in May 2016, the Russian government itself was unable to place its Eurobonds in Western markets.

But while there was a storm in the Russian financial market and the ruble collapsed in late 2014 and early 2015, the cause was ultimately a set of factors in which sanctions played an important but not decisive role. Moreover, with time, the impact of Western financial sanctions has declined significantly.

Meanwhile, Western bans on exporting equipment and providing certain services to the Russian energy industry did not touch either power generation or the gas sector, because of the EU’s dependence on Russian gas imports. Though the United States has imposed financial sanctions on Gazprom, the EU has not joined in; in fact, Gazprom has been able to raise capital in Europe. And Russian companies have benefited from the ruble devaluation and managed to ramp up production and exports each quarter since 2014.

It is too early to determine how seriously sanctions will hit the Russian defense industry. The industry is dependent on importing machines; according to estimates, Russia imports more than 70 percent of the machines needed for the technological renovation of the defense industry, with two-thirds of that coming from six countries participating in the sanctions. And Russia’s defense industry relies very heavily on Ukraine, especially in rockets and space, aircraft, and shipbuilding. In the coming years, we may see either evidence of sanctions’ deleterious effects on production, or the fruits of Russia’s “import-substitution” actions.

Aside from targeting specific industries, companies, and people, the sanctions have had a less-visible effect: political pressure on Russia has dramatically increased the political risks of doing business there, and the flow of Western investment projects and innovation has slowed to a trickle. This lack of access to technologies and human capital is much more critical to the Russian economy in the medium- and long-run.

This combination of Western sanctions and increased political risks will inevitably lead to the growing isolation of the Russian economy, a widening technological gap, lagging competitiveness, and slower growth. Those effects are not visible now, but in five to seven years, if sanctions are not removed, they will exact a heavy cost on Russia’s economy.

That’s not enough, however. If the goal of Western sanctions is to change Russian policy toward Ukraine, and if sanctions are to remain the preferred policy tool, the United States and the EU must not only renew sanctions but escalate them. Only a stricter and more comprehensive sanctions regime, as demonstrated by the successful sanctions program against Iran, could change the Russian calculus on Ukraine.

The West should consider tightening personal sanctions, expanding financial sanctions, and increasing the cost to Russia’s energy sector. In addition, the West should more strongly condemn Russia’s war in Ukraine, systematically publicizing Russia’s Minsk II violations with clearly defined consequences. And rather than sanctions being renewed by a vote every three to six months, they should remain indefinitely until canceled or mitigated only by the unanimous decision of EU members.

If sanctions remain unchanged—let alone loosened—their effectiveness will fade, demonstrating the West’s impotence in a serious crisis. If, however, the West wants to show that sanctions can be an important foreign policy instrument, it needs to escalate the scope of sanctions and their pressure on Russia, and significantly increase the costs of Putin’s aggressive policy.

Sergey Aleksashenko is a nonresident senior fellow for global economy and development at the Brookings Institution. Aleksashenko previously served as deputy minister of finance of the Russian Federation, and as the former deputy governor of the Russian Central Bank. He is the author of the Atlantic Council’s Evaluating Western Sanctions on Russia report, from which this article has been adapted. He tweets @Saleksashenko.