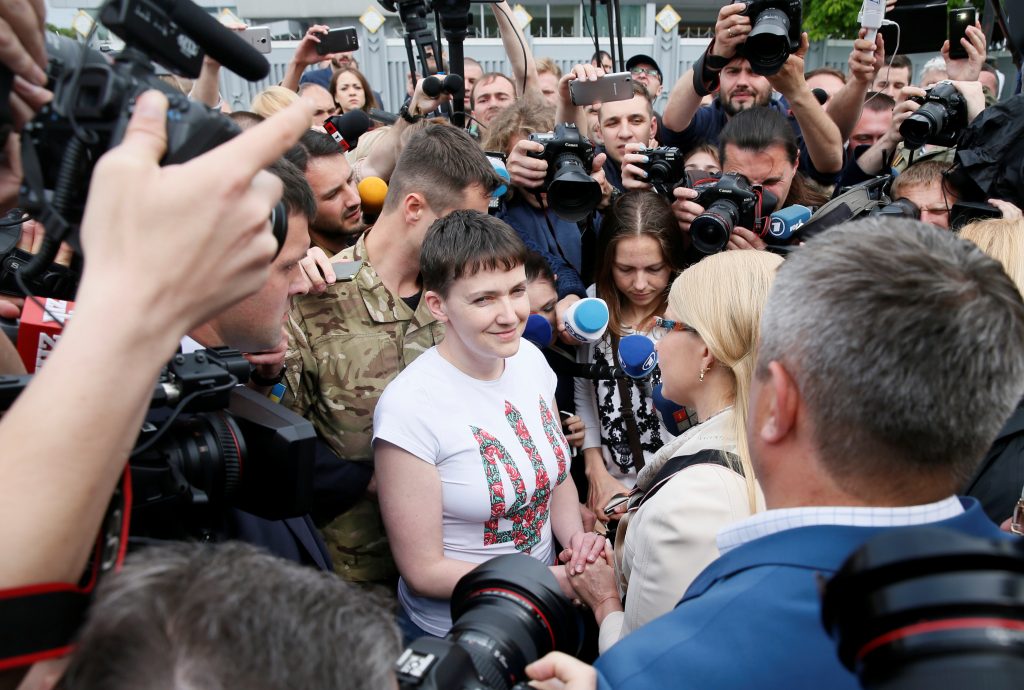 It has finally happened. Nadiya Savchenko is back in Ukraine.

The female pilot, who was captured in Ukraine and illegally brought to Russia on falsified charges, became a symbol of Ukrainian resistance against Russian efforts to destabilize the country.

A Russian court sentenced Savchenko to twenty-two years for killing two Russian journalists in eastern Ukraine, but she has always maintained her innocence. Savchenko went on a prolonged hunger strike several times to protest her illegal detention and accusations of the alleged crimes.

Thanks to the efforts of Ukrainian politicians and activists, the worldwide #FreeSavchenko campaign, and the tireless work of her sister Vira, Savchenko became internationally known and one of Ukraine’s most popular public figures.

On May 25, she was released after a prisoner exchange in Rostov-on-Don airport; she was exchanged for two Russian intelligence officers—Yevgeniy Yerofeyev and Aleksander Aleksandrov—whom Moscow claimed were fighting in Ukraine privately.

Savchenko’s return is of symbolic importance for Ukrainians, and it may unleash a political earthquake in Ukraine.

Savchenko was returned on a significant anniversary: two years ago, Ukrainian President Petro Poroshenko won the presidential election in the first round. Since then, Poroshenko’s numbers have dipped, but the release of Savchenko could give him a boost. Over the last two years, Poroshenko used every occasion he could to outline the work his office was doing to return the pilot. Now it has finally happened. This victory gives him solid ground to repair his fading support.

Yet the main question is how relations between Savchenko and former Prime Minister and Fatherland party leader Yulia Tymoshenko will work. The release of Savchenko will undoubtedly boost the ratings of the Fatherland party. Savchenko is first on Fatherland’s party list, which made her a member of the Ukrainian parliament in 2014 in absentia. Knowing that Fatherland’s polling numbers are on the rise, Tymoshenko has been strongly advocating for early parliamentary elections this fall. Savchenko’s return will only strengthen Fatherland’s position. We should expect a flurry of political activity from Tymoshenko in the coming months. What we don’t know is how long Savchenko will remain a member of the party.

There are several reasons to suspect this political marriage won’t last. First, there can only be one leader. Both Tymoshenko and Savchenko are known to have strong personalities. Both are outspoken and charismatic. Both are icons. Tymoshenko used to be a symbol of political persecution under former President Viktor Yanukovych, while Savchenko is a symbol of Ukrainian resistance against the Kremlin. Second, Tymoshenko needs Savchenko to keep her party ratings on the rise. From what we have learned about Savchenko over the last two years, we know she is unwilling to play political games.

In fact, there can hardly be a suitable political role for Savchenko. She is a living legend, a symbol, and a national hero. She has immense support from society and international leaders. At the same time, she is not a politician. She is straightforward and honest in telling exactly what she thinks—a rare quality in politics unlikely to bring her more political friends.

Her voice is loud and will be heard not only in Ukraine, but far beyond its borders.

Her moral stature and presence in Kyiv present a great challenge to the country’s politicians and to herself. She admitted as much while addressing journalists barefoot, clad in blue jeans and her traditional white t-shirt with a Ukrainian trident at the Boryspil airport in Kyiv on May 25.

“We will have in parliament the kind of people who are worthy of it. We will have a better life, as dignified human beings deserve to live,” she said. “I’ll be honest with you, I don’t know how to do it. I won’t promise it will happen tomorrow. But I can tell you that I’m ready to die to make it happen,” she said.

A few hours after returning home, it is unclear which way she will go and how she will use her immense political capital. But some things are certain—she has a lot to say, many listen to her, she’s not afraid of anyone, and she won’t be stopped.

Kateryna Kruk is a Ukrainian activist and journalist. In 2014, the Atlantic Council awarded her its Freedom Award for her work communicating the Euromaidan Revolution to the world via Twitter. Follow her on twitter @Kateryna_Kruk

Image: Ukrainian servicewoman Nadiya Savchenko talks to the media next to Yulia Tymoshenko at Boryspil International airport outside Kyiv, Ukraine, May 25, 2016. REUTERS/Gleb Garanich