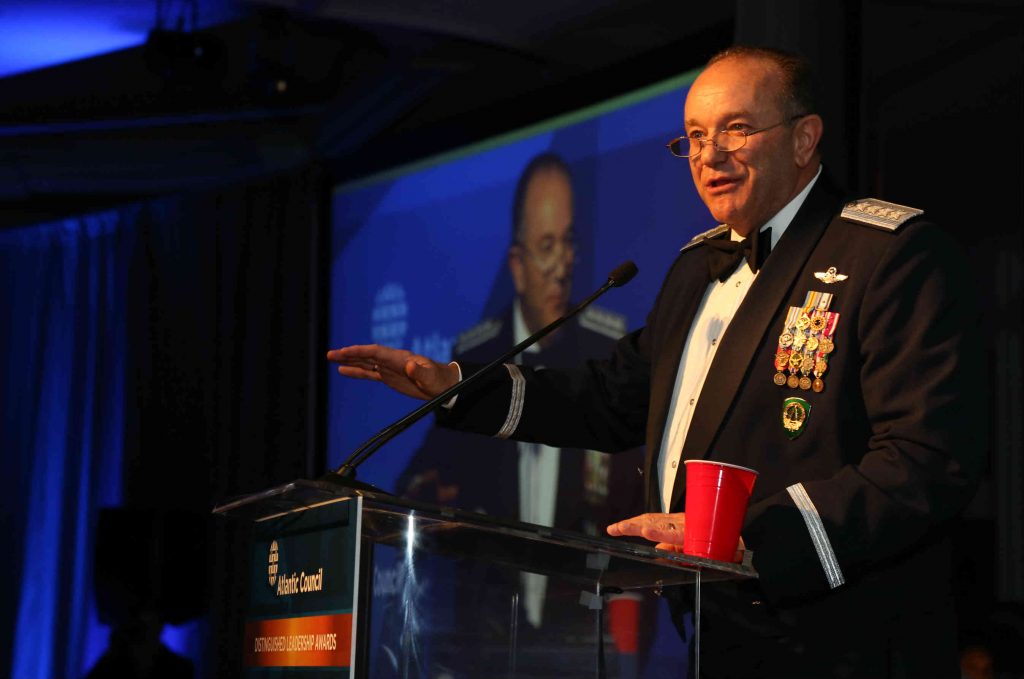 Breedlove, Supreme Allied Commander, Europe and Commander of US European Command, cited Russia’s annexation of Crimea in March 2014 and continuing support for separatists in eastern Ukraine as signals of a “clear end” to “two decades of internal Russian struggle over security policy.”

It is a sign that Moscow is intent on shifting its relationship with the West from one of “strategic cooperation” to “strategic competition,” he explained.

He said Russia “is on a far different course” than the West had expected after the fall of the Berlin Wall. Today the country employs all elements of national power; its course is not a temporary aberration but a new norm; and its path reflects a long-term commitment, sustained by long-term plans for resource allocation.

“This is a Russia that recognizes strength and sees weakness as an opportunity,” he said.

Breedlove said Russia’s approach of “strategic competition” requires a new mindset and approach. “The US and NATO must adapt and I am happy to report that we are adapting,” he said. “The stakes are high but we should not shy away from that because Russia is not.”

The prospect of a Europe whole, free, and at peace emerged after the Cold War.

“We broke with confrontation and pursued a policy of cooperation,” said Breedlove. “And for a long time, many of us believed that Russia would also embrace that cooperation.”

In hindsight, however, Russia was clearly on a different path.

Russia sent a number of signals that were missed by the West. It stoked separatist tensions in Georgia and Moldova in the early 1990s; it suspended observance of the Conventional Forces in Europe Treaty in 2007; it invaded Georgia in 2008; and Russian President Vladimir Putin continued to crack down on the freedoms of his own people.

“All of these were signals of a changing Russia, breaking with the principles and values of the West,” said Breedlove.

“Through it all, we remained optimistic and continued to treat Russia as a valued and trusted partner. But last year, that optimism faded,” he added.

In written testimony to the US Senate Armed Services Committee on April 30, Breedlove said that since the beginning of 2014, Putin’s Russia has “abandoned all pretense of participating in a collaborative security process with its European neighbors and the international community.”

Putin annexed Crimea on March 18, 2014. In a documentary to mark the first anniversary of the annexation, he insisted that the annexation was justified.

“It’s because this has elements of historical justice. I believe we did the right thing and I don’t regret anything,” Putin says in the film The President, according to RIA news agency.

Despite a peace agreement signed February 11 in Minsk, Russia continues to support separatists in eastern Ukraine who are preventing Organization for Security and Cooperation in Europe (OSCE) monitors from verifying compliance with the ceasefire by blocking access to territory under their control.

In a March 30 address at the Atlantic Council, retired Gen. Wesley Clark, a former NATO Supreme Allied Commander, warned that Russian-backed separatists are planning a spring offensive in eastern Ukraine.

Talking from a ‘position of strength’

Breedlove, meanwhile, said it is important for the West to keep an open dialogue with Russia, “but we must talk from a position of strength,” and “embrace cooperation wherever our mutual interests align, but we must also ensure we are ready to compete.”

“We must lead along the path that dissuades and deters Russia. And all the while we must leave the door open for Russia’s return as a law-abiding member of the international community… a contributor to Europe’s security and prosperity,” he said.

“We look forward to that day. Russia has everything to gain,” he added.

Breedlove said winning the strategic competition with Russia and preserving the international order necessitates three actions: first, the transatlantic alliance must challenge Russia’s current policies and demonstrate that Putin’s current approach will not be allowed to damage its security. Secondly, the alliance must deter Russia by carefully shaping Moscow’s choices and managing Putin’s confidence. Third, the alliance and the United States must continue to lead courageously.

“The great news is that our alliance is rock solid,” he said.

Image: Russia’s approach of “strategic competition” requires a new mindset and approach, Gen. Philip M. Breedlove, Supreme Allied Commander, Europe and Commander of US European Command, said on April 30 at the Atlantic Council's Distinguished Leadership Awards dinner. “The US and NATO must adapt and I am happy to report that we are adapting.” (Imagelink.com/denniskan)