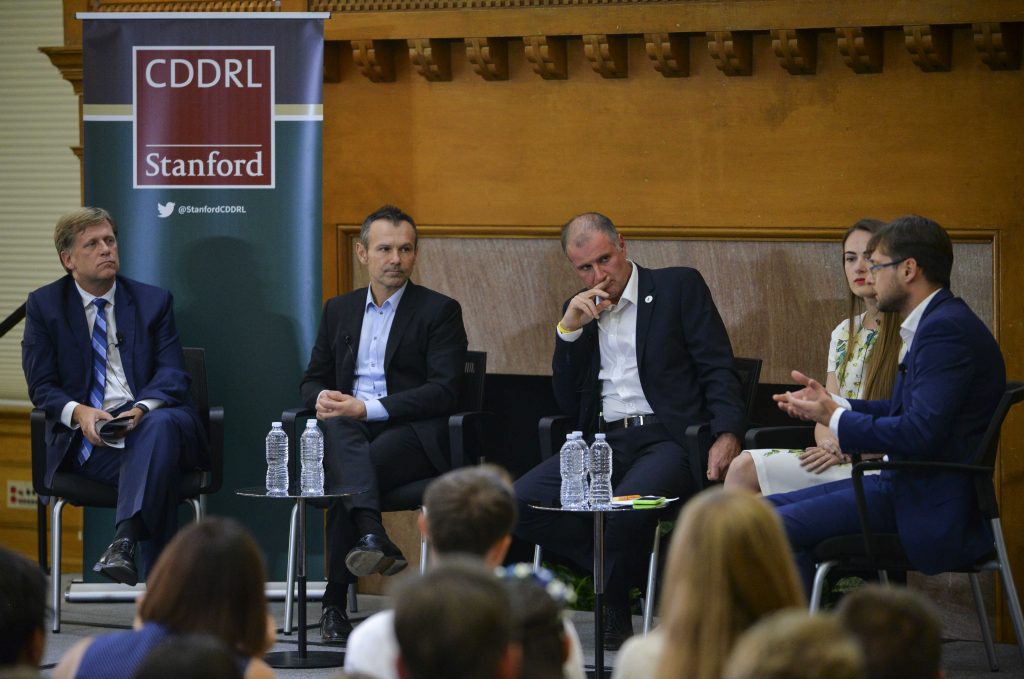 Even within Ukraine’s embattled political sphere, a new generation of leaders is still inspiring change. Stanford University intends to harness this energy through its Ukrainian Emerging Leaders Program, a new program for mid-career professionals to study at Stanford for an academic year. Olexandr Starodubtsev, Oleksandra Matviichuk, and Dmytro Romanovych were inducted as the first members of the program, which is hosted at Stanford’s Center on Democracy, Development, and the Rule of Law (CDDRL).

Joined by Ukrainian rock star, activist, and CDDRL’s visiting scholar Svyatoslav Vakarchuk and former ambassador to Russia and the director of Stanford’s Freeman Spogli Institute Michael McFaul, the leaders spoke to a packed crowd of more than 200 people from the Stanford and local Ukrainian-American community on October 3.

Starodubtsev, Matviichuk, and Romanovych were selected for their contributions to Ukraine’s political development, leadership potential, and strong project proposals. They will take classes, consult with academic mentors, and build relationships across the campus to test and refine their projects.

Starodubtsev founded the electronic public procurement system ProZorro, which many consider to be the most successful reform since the 2014 Revolution of Dignity. At Stanford, he plans to focus on expanding the ProZorro model for global use, and improving his own human resource management skills to advance public administration within the Ukrainian government.

Matviichuk is a human rights defender who created the civic initiative Euromaidan SOS, which responded to calls for help from victims on the Maidan. She has continued to work on human rights issues ever since. Her goal is to harness the remaining energy from the Revolution of Dignity to create a network of volunteers who will work to create sustainable reforms and institutions.

Romanovych, who works at the reform delivery office within the Cabinet of Ministers, has been responsible for deregulation reform and improving the business climate in Ukraine, resulting in the abolition of hundreds of Soviet-era regulations. His goal is to create a roadmap for future reforms based on the success he has already had.

In his opening remarks, Francis Fukuyama, the Mosbacher director of CDDRL, emphasized the need to train individuals to support sustainable reforms. “I do not think that a democratic revolution in a place like Ukraine will exist without cultivating a whole generation of reformers who want a different society,” he said.

Jaroslawa Johnson, president and CEO of the Western NIS Enterprise Fund (WNISEF), also made remarks. She explained the importance of the Fund’s work in the region since 1991, and why this program is a logical extension of WNISEF’s previous work. She underscored how critical education is to Ukraine’s development, and that she hopes these emerging leaders will use Stanford resources to support their work, return to Ukraine, and contribute to the country’s future.

The four panelists agreed that the most urgent need is to improve trust in political institutions. Romanovych noted that society is active and engaged, but added that there is still a need for strong political will and organization to put this energy into effective reforms. Matviichuk warned against complacency and political apathy.

If Ukraine can make progress on the rule of law and build a stronger state that delivers, the country will see serious improvement in its political development, Vakarchuk said.

Some members of the audience expressed frustration with the current political situation. When asked about the issue of corruption—one that often seems hopeless—Starodubtsev pointed to previous successes. Before ProZorro, public procurement had been symbolic of the corruption that plagued Ukraine. But with Starodubtsev’s unique idea, he and his team were able to rebuild the existing infrastructure.

For Starodubtsev, this is the attitude reformers need to take. “We are the ones that can do reforms, we can deliver results, and we can change the political culture through our work,” he said.

The Ukrainian Emerging Leaders Program received 340 applications in its pilot year, making the selection process highly competitive. The end goal is for each practitioner to return with an implementable project that will support democratic development and institution-building in Ukraine.

The program is sponsored by WNISEF together with Tomas Fiala, CEO of Dragon Capital, Ukraine’s leading investment bank, and Vakarchuk, as well as the Astem Foundation.

Sasha Jason is a program associate at the Center for Democracy, Development, and the Rule of Law within the Freeman Spogli Institute for International Studies at Stanford University.