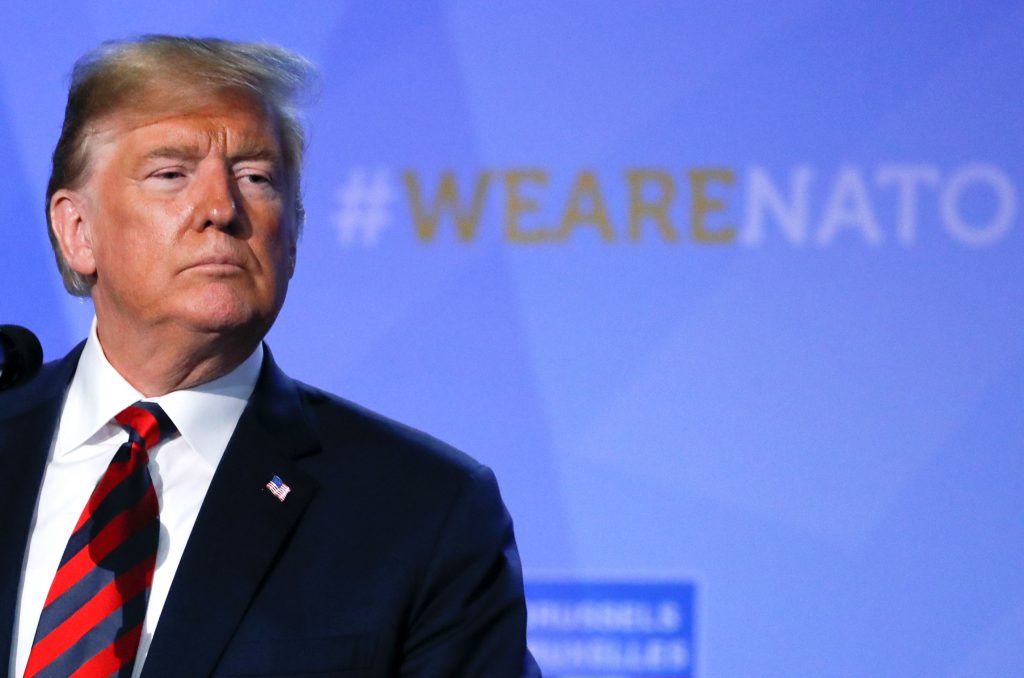 If one took the punditry seriously, it would be easy to conclude that the Western liberal order is being unmade before our very eyes. Some worried that US President Donald Trump would destroy the North Atlantic Treaty Organization this week. He didn’t. Instead, he reaffirmed his commitment to it.

Yes, he undermined the credibility of the alliance and potentially created deep rifts among its members. He bashed Germany and told the Europeans and Canada that they need to pony up more dough. He was crass, and the United States’ image abroad took another hit. But NATO still stands.

Trump’s next big meeting is with Russian President Vladimir Putin in Helsinki on July 16. The president has an unexplained soft spot for the Russian strongman and wants to mend US-Russian relations badly. After last month’s flop in North Korea, Trump needs a win.

On June 29, Trump told reporters that he might recognize Crimea as Russia’s. In 2014, Russia invaded and annexed Crimea, which had been part of the Ukrainian Soviet Socialist Republic since 1954 and then of an independent and sovereign Ukraine since 1991. The United States has maintained that Crimea belongs to Ukraine—full stop, and so has the European Union. The White House later walked back Trump’s statement and said that US policy has not changed.

Still, Kyiv remains understandably anxious. The nation of 44 million worries that Trump will bargain away Crimea for better US-Russian relations. Others fret that Trump will lift sanctions on Russia.

The truth is that Trump can’t do as much as people think he can.

He’s only president. Congress plays a huge role in US foreign policy and places constraints on the executive.

Trump is unpredictable, and no one knows what he’ll propose to Putin privately. He’s surprised us before. Last year he promised Putin cyber cooperation even after the Russians interfered in the 2016 US presidential election with cyber tools.

“We should expect to be taken off guard,” longtime diplomat and former US Ambassador to Ukraine John Herbst told me. “I think he will say something that will surprise most of us when he sees Putin.”

Trump has the authority as president to say that the United States will now recognize Crimea as Russia’s, Herbst confirmed.

But Trump would also face the wrath of Congress. Both parties strongly support Ukraine’s sovereignty and territorial integrity and would roundly condemn the move and likely legislate additional support for Ukraine.

A Senate resolution introduced on July 10 by Senators Portman and Menendez is clear: “The Senate reiterates that Crimea is part of the sovereign territory of Ukraine,” and any attempt to change that should be rejected.

There is some good news. The thing that Putin craves more than anything—sanctions relief—is off the table in Helsinki.

“Trump does not have the power to unilaterally roll back sanctions,” Edward Fishman, a sanctions expert and former State Department official told me.

Even if Trump promises Putin that he’ll work to roll up sanctions, he can’t do it without Congressional support.

The Obama administration put tough sanctions in place after Russia annexed Crimea and invaded eastern Ukraine. They include sectoral sanctions, sanctions on Putin’s buddies, and an embargo on Crimea that prevents Americans from doing any business there.

Last July, Congress made it very difficult for the president to change these sanctions by passing a new law that gives Congress a veto over any decision to relax them.

If Trump wanted to walk back the sanctions, he would need to submit a report to Congress saying that Russia has implemented the Minsk Agreements—the ceasefire agreement that Russia has continually violated—or that Russia’s aggressive and expansionist foreign policy has massively changed, which it hasn’t and won’t. Congress then has the opportunity to vote on a resolution to stop Trump from relaxing sanctions.

In other words, it’s not going to happen.

But where Trump’s hypothetical promise might make a difference is with the European Union. If Trump signals that he’s going soft on sanctions (even if he cannot), the European Union may begin to wobble as well, Fishman worries. The European Union requires a unanimous vote of its twenty-eight members to renew its sanctions every six months, and the body must affirmatively renew them in December.

Trump could also withhold certain forms of military assistance from Ukraine, Fishman said, but again, this is unlikely given the strong support Ukraine enjoys on Capitol Hill.

All in all, the much-hyped Trump-Putin summit is likely to follow what is emerging as the pattern for this administration’s high-profile diplomatic engagements, like the NATO Summit that just ended or the ongoing back-and-forth with North Korea: apocalyptic predictions from the pundits, jarring soundbites from the participants, and much ado about nothing as the outcome.