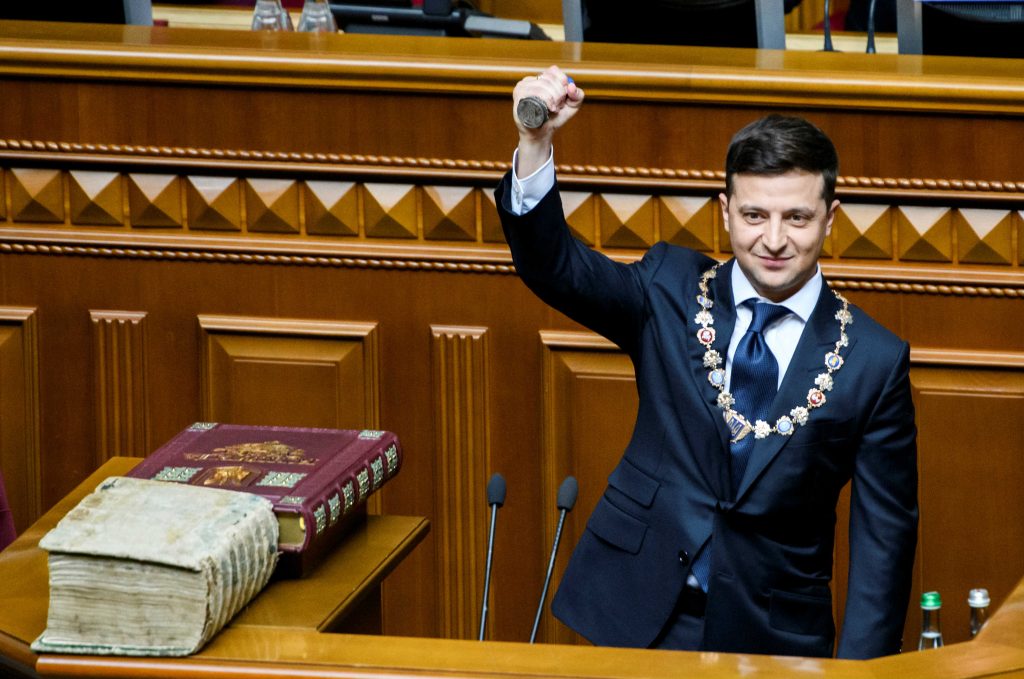 Ukraine's President-elect Volodymyr Zelenskiy takes the oath during his inauguration ceremony in the parliament hall in Kyiv, Ukraine May 20, 2019. Vladyslav Musiienko/Ukrainian Governmental Press Service/Handout via REUTERS

May 20 was a historic day for Ukraine and beyond. Volodymyr Zelenskiy, a political newcomer dismissed and denigrated by his political opponents, crowned his inauguration as president with an inspirational speech and decisive preliminary actions that have already borne results.

Enjoying the support of almost three-quarters of Ukrainian voters, he delivered a concise but powerful address to a discredited parliament and political establishment. Showing teeth hidden behind his showman’s smile, he told them that their days were over and a new chapter in the nation’s history had begun.

For a nation sold short by its leaders and whose political culture has suffered as a result, it was a crash course in civics.

The new president made the crucial point that each citizen is responsible for making the country work properly and fairly, from its elected officials to its rank and file.

The president is not an icon, a portrait to be hung up in the offices of the important. He asked people not to hang his photo in their offices, a break with the past.

One of Zelenskiy’s central messages was the need for inclusiveness, solidarity, and unity in building the Ukrainian political nation and a modern European state.  “We are all Ukrainians: there are no bigger or lesser, or correct or incorrect Ukrainians,” the Russpohone Ukrainian of Jewish origin said in perfect Ukrainian.

Zelensky singled out Ukrainians in Crimea and the Donbas living under Russian occupation. He acknowledged that the authorities in Kyiv had neglected “to make them feel Ukrainian and understand that they are not strangers, but they are our people,” and that this needed to be rectified.

He also appealed to the large Ukrainian diaspora for its support. “There are 65 million of us,” he said. “We really need you. To all who are ready to build a new, strong and successful Ukraine, I will gladly grant Ukrainian citizenship.”

The new president named ending the war with Russia a priority, but not at the expense of Ukraine’s territorial integrity. He also stressed that the resumption of bilateral dialogue was contingent on the release of Ukrainian political hostages. All in all, this was not what the Kremlin wanted to hear.

Zelenskiy did not go into detail about his program, which some have criticized for remaining vague. However, this was not the occasion to do so. That will come. The point of the speech was to bluntly and confidently tell the old elite to move aside.

His victory, Zelenskiy reminded them, proves that Ukrainians had rejected the old corrupt ways and wanted to build a country “where all are equal before the law and where all the rules are honest and transparent, the same for everyone. And for that, we need people in power who will serve the people.”

To reinforce his message, the president asked the parliament to dismiss the head of the Security Service (SBU), the prosecutor general, and the minister of defense. Calling the bluff of those who had attempted at the last minute to delay the early dissolution of the parliament through political games and legal minutia, he then announced that he was dissolving the parliament.

Zelenskiy told the shocked deputies that he expected them to deliver on three issues in the next two weeks: pass electoral reform, remove parliamentary immunity, and restore criminal liability for illegal enrichment by officials.

This was by far the most candid and refreshing inaugural address from any of the six presidents since 1991. It was the most Ukraine-focused and the first to address political inclusiveness in such a direct and constructive manner.

Zelenskiy’s inaugural address confirmed that he is not simply the product of a change election. He wants to change not only policies, but mindsets, established practices, and political culture. Thus, the showman turned politician may be the promoter of a quiet but potentially extensive revolution.

Within hours of delivering his address, the president had received the resignations of the minister of defense followed by that of Prime Minister Volodymyr Groisman.

On May 21, Zelenskiy met with the leaders of Ukraine’s parliamentary factions and passed another test of his political skills. He emerged with an agreement to hold early parliamentary elections on July 21.

Zelenskiy has also named the key members of his administration, selecting somewhat unexpectedly the savvy former Minister of Finance Oleksandr Danyliuk for the sensitive position of Secretary of the National Security and Defense Council, and his election manager and close associate Ivan Bakanov as first deputy head of the SBU responsible for combatting corruption and organized crime.

There are some mixed signals, however. Zelenskiy appointed Andriy Bohdan, a tough former lawyer to oligarch Ihor Kolomoisky and someone who also worked in the Yanukovych administration, as head of the presidential administration.  Also, an extraordinary session of the parliament convened at the president’s request on May 22 failed to consider his bill to switch from a majority to a proportional voting system.

His next challenges are to get the parliament to adopt the laws he is insisting on before it is dissolved (and there will be a further chance on May 28), to quickly begin creating the political party infrastructure he will need to deliver his supporters into the new parliament, and to forge alliances that will form the basis of a new majority coalition.

Bohdan Nahaylo is a British-Ukrainian journalist and veteran Ukraine watcher based in Kyiv, Ukraine.