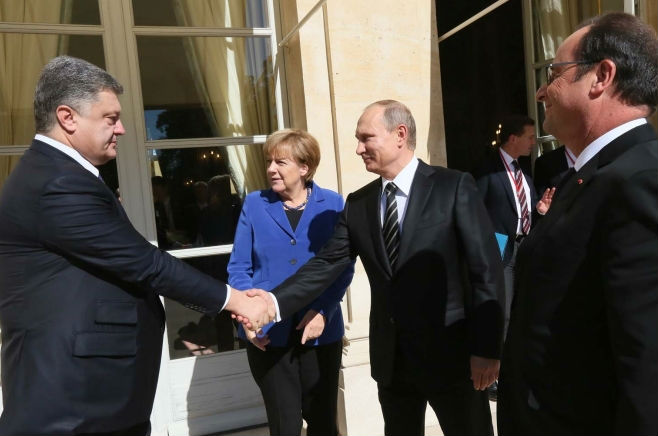 The October 2 Paris Summit with German Chancellor Angela Merkel, French President François Hollande, Ukrainian President Petro Poroshenko, and Russian President Vladimir Putin produced no breakthrough for peace in Ukraine. But it provided additional proof that, for the moment, Putin wants to lower tensions in the region. The parties spoke about three issues: the withdrawal of armaments, the timing and conditions of elections, and OSCE monitoring of the region controlled by Putin’s proxies in eastern Ukraine. The handling of these issues puts most of the onus on Moscow and its agents, and the Kremlin’s follow-through should be seen as a test of Putin’s intentions.

The parties are supposed pull back tanks and other weapons—a condition of the original Minsk I and Minsk II agreements, which Moscow has flagrantly violated. If the Kremlin removes weapons this time, that will suggest that the lull in fighting since September 1 may be a real lull, not a period to prepare for a future offensive.

Hollande said that holding elections on October 18 and November 1 in Ukraine’s rebel-controlled regions as currently planned would be a major breach to the Minsk Agreement. In Paris, Putin appeared to agree that the elections in the so-called Donetsk and Luhansk People’s Republics should take place under Ukrainian law. It’s not clear if Putin will formally agree, but postponing the elections there would be a clear indication of a new Kremlin policy. Russian Presidential spokesman Dmitriy Peskov said that an envoy would discuss delaying the elections with rebel leaders. In the Kremlin narrative, those leaders can always turn down Putin’s “advice.” Putin’s Minsk partners understand that such a development would be one more example of his bad faith.

Hollande also said that the elections in these areas should take place within ninety days of Ukraine’s passage of a law on decentralization. This is the hard issue for Poroshenko, since it’s highly controversial and some see it as an unwarranted concession to Moscow. Parliament passed the first reading of this law in the summer amid violent protests. To become the law of the land, it must pass a second time with a two-thirds majority. Its passage is by no means assured. Ukrainian critics of the law should be relieved by the fact that the Kremlin considers this bill inadequate because it would not give Donetsk People’s Republic and the Luhansk People’s Republic a veto over Ukraine’s national security policies.

Finally, the parties in Paris agreed that OSCE monitors should be given access to all parts of the Kremlin-controlled east. This too will be a quick test of Putin’s intentions. Allowing the monitors unrestricted access would enable the international community to verify the withdrawal of Russian troops and weapons and make it much harder for the Kremlin to launch a new offensive.

On balance, this is not a bad result. Ukrainians are understandably unhappy that Hollande is now talking as if Minsk II will not be complete by the end of the year, when Ukraine is supposed to regain control over the border. Yet as long as sanctions will be extended in January, significant pressure will remain on the Russian President. His game is to see if the relative calm in the Donbas and easily reversible concessions can lead to a lifting or at least an easing of sanctions in January. So long as Merkel remains firm that any ease in sanctions requires full Kremlin implementation of Minsk, this ploy will fail.