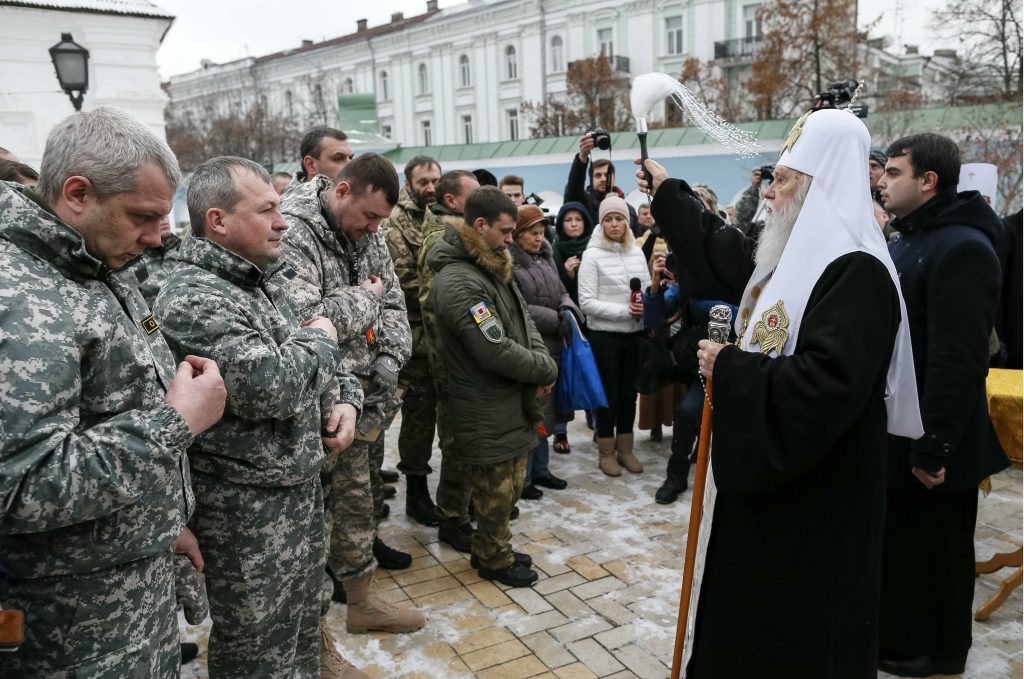 Traditionally, Ukraine has been home to the vast majority of Russian Orthodox Church members. In 1990, of the almost twelve thousand Orthodox communities throughout the Soviet Union, more than six thousand were in Ukraine; only three thousand were in Russia itself. When Ukraine declared its independence in 1991, a number of communities broke with the mother church to form the Kyiv Patriarchate. The remaining churches renamed themselves the Ukrainian Orthodox Church-Moscow Patriarchate.

Through a series of agreements, as well as official favoritism by former President Viktor Yanukovych’s government, the vast majority of communities remained loyal to Moscow. There are 12,515 Moscow parishes, compared to Kyiv’s 4,877 parishes. The number of churchgoers tells a different story, however; approximately fifteen million Ukrainians identify with the Kyiv Patriarchate, while only ten million remain loyal to the Moscow one.

“The shift in public opinion has been tremendous,” said Frank Sysyn, a professor at the Canadian Institute of Ukrainian Studies. “The real crux of the matter…is in the villages.” His comments were expanded upon by US Naval War College Russian and Eurasian expert Nikolas Gvosdev. “It becomes a question of identity, it’s not a question of faith,” he said.

Under ordinary circumstances, the growth of the Kyiv Patriarchate would be unexpected. It is not recognized by either the Russian Orthodox Church nor by Orthodoxy’s world center, the Patriarchate of Constantinople. The current president of Ukraine, Petro Poroshenko, is a member of a Moscow-affiliated parish. The Moscow Patriarchate itself is divided on the political issues of the day. “In our church there are two tendencies, pro-Russia and anti-Russia, and we try to maintain a balance,” said Moscow Patriarchate Secretary of External Affairs Nikolai Danilyevich.

The Kyiv Patriarchate, however, has identified itself fully with Ukraine’s struggle for sovereignty. During the Euromaidan protests, St. Michael’s Church, part of the Kyiv Patriarchate, opened its doors as a shelter for protestors. Myroslav Marynovych, Vice Rector of the Ukrainian Catholic University in Lyiv, commented, “Many in Ukrainian society were amazed by the symbolism of this act, and it restored the ancient function of a church as a sanctuary for persecuted individuals and groups.” Moscow’s St. Sophia church, meanwhile, remained shut.

As Russia seized Crimea and unrest broke out in the Donbas, the Moscow Patriarchate tried to be a peacemaker, calling for both sides to lay down their weapons. For Ukrainian nationalists, the call to disarm in the face of Russian aggression was not greeted warmly. Some of the priests went further. The Moscow Patriarchate Metropolitan of Simferopol and Crimea Lazar has cooperated with the Russian occupation, consecrating a monument to the separatist “people’s militia.” Moscow Patriarchate priests supported the blessing of soldiers and equipment of the Russian Black Sea Fleet. Priests in other parishes refused to hold funeral ceremonies for Ukrainian soldiers who died in the conflict.

Kyiv Patriarch Filaret, however, has been unwavering in his support for Ukraine’s struggle. “Right now Russia has committed an act of aggression against Ukraine,” he said. “Under these conditions, the church has had to face the question, ‘Does a church need to bless and protect its fatherland?’” Speaking of his rivals, the Patriarch commented, “[B]eing dependent on Moscow and having their own Moscow patriarch, they cannot call aggression by its name. Some of the bishops and priests have openly spoken in support of Putin and in support of Russia, against the Ukrainian government and against Ukraine as such.”

As the Ukrainian conflict stretches on, more Ukrainians may agree with the assessment of Bishop Evstratii Zoria: “Having a church that is dependent on Russia is, in fact, a threat to our national security and a threat to our existence as Ukrainians.”

James J. Coyle, a UkraineAlert contributor, is a Nonresident Senior Research Fellow at the Atlantic Council, and Director of Global Education at Chapman University in Orange, California.

Image: Kyiv Patriarch Filaret sprinkles holy water on servicemen during a ceremony to bless ambulances, at St. Michael's Golden-Domed Cathedral in central Kyiv January 27, 2015. Three ambulances bought with donations from the faithful were blessed during the ceremony, and will be transferred to Ukrainian servicemen fighting in east Ukraine. REUTERS/Gleb Garanich