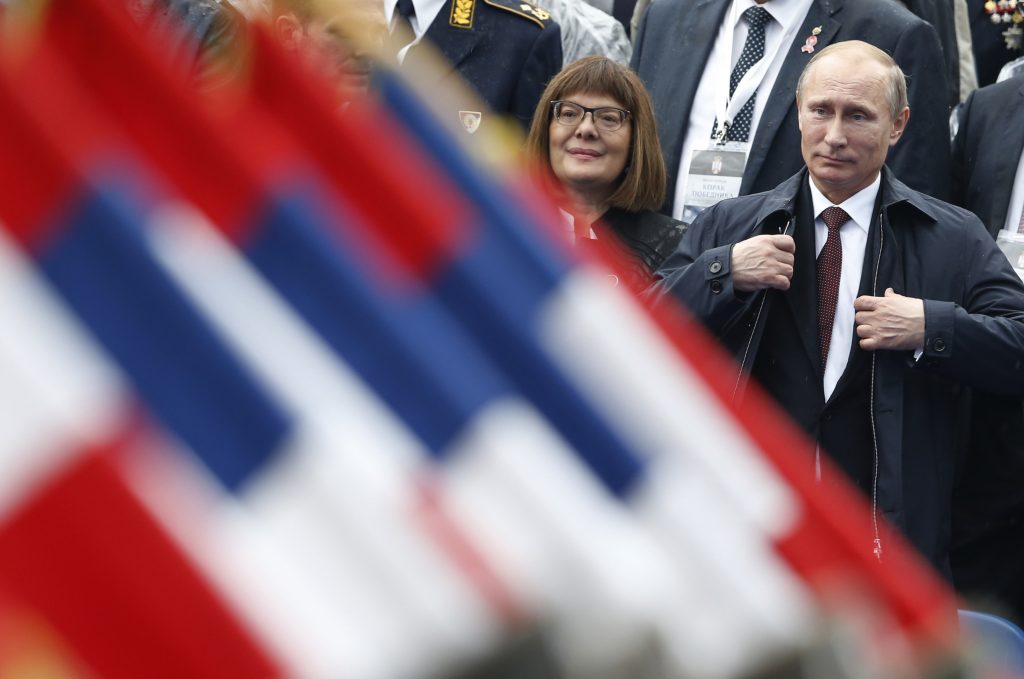 Russian President Vladimir Putin attended a military parade to mark 70 years since the city's liberation by the Red Army in Belgrade October 16, 2014. Serbia feted Putin with troops, tanks, and fighter jets to mark seven decades since the Red Army liberated Belgrade, balancing its ambitions of European integration with enduring reverence for a big-power ally deeply at odds with the West. (Reuters/Marko Djurica)

While the Russian threat to Poland and the Baltic States has sparked justified anxiety, Russian President Vladimir Putin’s imperial adventure is just as much of a threat to the Balkans.

Moscow is putting on a full-court press—using energy exports, information warfare, trade, arms sales, and efforts to obtain military bases in Cyprus, Montenegro and Serbia—to subvert the process of European integration, undermine democratic values and institutions, and erode the independence of Balkan states. Moscow also seeks to maintain and perpetuate the ethnic tensions that tore Yugoslavia apart in the 1990s, even as the states that emerged from that bloody chaos stand poised to move on to a new era.

Look no further than Serbia. The Russians are exploiting a flood of ethno-religious propaganda stressing the supposed unity of the Serb and Russian peoples (though this is far less than the Kremlin makes it out to be), the threat from NATO and the European Union, the lure of Russian energy, and unresolved issues in Kosovo. Moscow has brought immense pressure to bear on Serbia—and it’s bearing fruit in the form of popular and elite support.  Serbia’s government has long understood, however, that the country must embrace the EU in order to flourish. Serbian policy has vacillated between the siren song of Moscow and the more mundane music of Brussels.

The West’s efforts to thwart Russia’s imperial designs have had serendipitous policy outcomes in the Balkans. EU sanctions forced Moscow to abandon the economically overpriced and unjustified South Stream pipeline in late 2014. Russia did so with no prior notice, leaving a slew of Balkan states, including Bulgaria and Serbia, in the lurch.  Moscow now talks up its new Turkish Stream pipeline, but the Serbian government wants none of it. Belgrade has announced that it would welcome Western gas supplies. While that announcement infuriated Moscow, it offers a golden opportunity that the West should seize.

Balkan energy markets are small by world standards, but their location gives them great strategic significance. An opportunity now exists for the United States and the EU to orchestrate solutions that would bring a long-desired southern gas corridor through Azerbaijan and Turkey to the Balkans, or US shale and liquefied natural gas to the region.  Energy remains a geopolitical instrument, and the West can move to supplant Russia’s subversive and corrupting influence through secure, realistically priced energy supplies that could strongly accelerate the integration of the Balkans, and even states like Azerbaijan, into Europe and the West.

This is not the only opportunity available to the West.  Given Serbia’s decision to seek EU membership, the West should commence discreet discussions with Belgrade to determine whether it is interested in following Croatia into NATO. If such interest is present, it should be encouraged. A NATO membership track would incentivize Serbia to establish civilian control over all of its security forces, provide enormous impetus to resolve outstanding ethnic issues, and reinforce the country’s desire to join the EU. NATO membership would close off major channels of support for Russia and materially strengthen the entire Balkan peninsula against Russian attempts to undermine EU and NATO unity.

Moscow is bringing all of its power to bear to influence Serbia, Hungary, Greece, and Cyprus to break with both the EU and NATO. But these multinational organizations, despite their internal crises, have the means to demonstrate not only that they retain their vitality, but also that they remain examples of superior development and governance.  To this end, sending military forces to reinforce Black Sea littoral states like Romania and Bulgaria is necessary but not sufficient. As Russia’s hybrid war in Ukraine shows, military power is only one tool in the toolbox, and not always the most important one.

A determined and coordinated multi-dimensional policy to integrate the Western Balkans undoubtedly presents the West with difficulties and challenges, but the potential gains outweigh the real obstacles that Russia has placed before Brussels. Chances to extend and strengthen Europe do not come often; world affairs offer few second chances.  Ukraine’s crisis has brought unexpected opportunity to the West and the Balkans. They should seize it while there is still time.