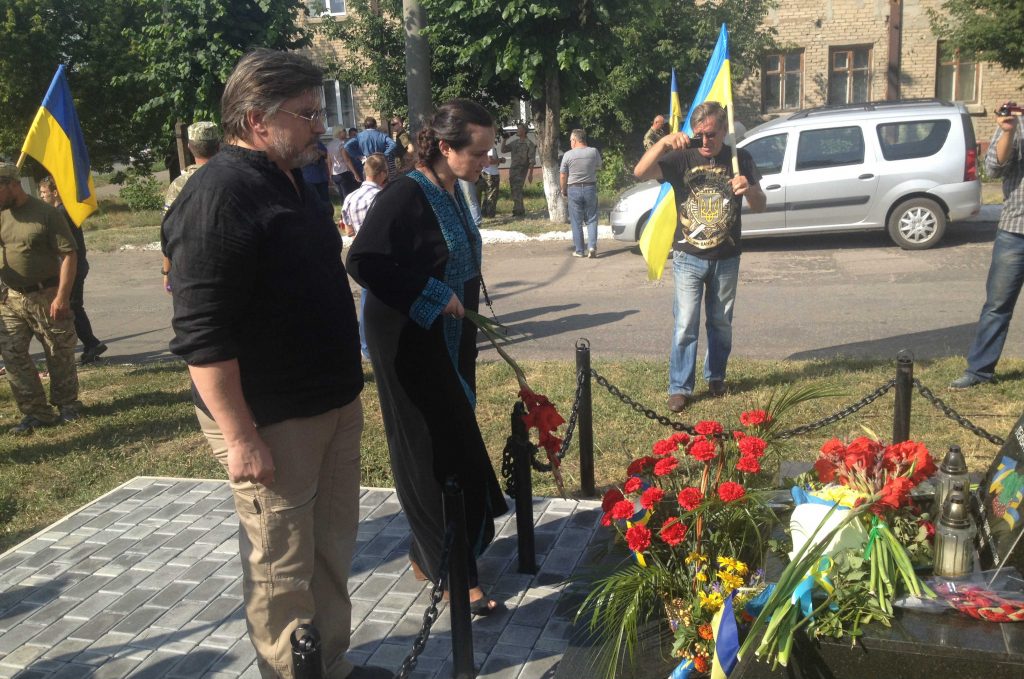 Bloody fighting between government troops and pro-Kremlin separatists and Russian regulars has continued for three years in Ukraine’s east. Meanwhile, an equally fierce battle is being waged for the hearts and minds of civilians on the Ukrainian side, many of whose loyalties hover between Kyiv and Moscow.

The town of Lysychansk in Luhansk province recently commemorated the third anniversary of the Ukrainian army driving out pro-Kremlin forces. But while the festivities rallied a passionately pro-Ukrainian section of the town’s 100,000 residents, they also revealed many who were less than exuberant to be under Ukrainian control.

As a Ukrainian soldier walked toward crowds in the town’s main square, two middle-aged women approached and asked what was happening. The soldier replied, “We are celebrating the liberation of the town three years ago.”

One of the women snapped back, “Who did you liberate us from?” Her answer and tone made it clear she and her friend were not fans of the Kyiv government.

Eastern Ukraine is overwhelmingly Russian-speaking and has the country’s densest concentration of Russian ethnics. Lysychansk’s inhabitants formerly worked in the coal mining industry and oil refineries in Luhansk and Donetsk, which expanded during Stalin’s breakneck race for industrialization. Much of this industry was already withering as the USSR fell apart; it shriveled further during Ukrainian independence and the conflict sounded the death knell for most of it.

During Ukrainian independence, Lysychansk was controlled by shady businessmen who became fabulously wealthy. Using the TV stations they owned, they kept the area in a weird twilight world of nostalgia for the Soviet Union. Now Lysychansk is a depressed and depressing place: a grimy, worn out town encircled by smokestacks and skeletal industrial structures.

During the time Lysychansk was occupied, pro-Russian forces terrorized anyone deemed pro-Kyiv and tried to eradicate Ukrainian flags and symbols, and to block Ukrainian language lessons in schools. It was the scene of fierce battles to wrest back control of Ukrainian territory from the Russians, beginning on July 19, 2014. By the time it ended five days later, some twenty Ukrainian soldiers and scores of pro-Russian fighters had died.

The commemorations began with a convoy of cars fluttering blue and yellow Ukrainian flags driven by pro-Ukrainian activists; they halted to pay tribute at spots where the deadliest fights happened. In the evening, folk music and rock bands played on the central square. Nobody heckled or tried to disrupt the events, although a few stared with hostility.

One of the organizers of the commemorations, Ruslan Miroshnichenko, who is from the area, estimates that perhaps 20 percent of the town’s inhabitants are vigorous Ukrainian government supporters; a higher proportion, 30 to 40 percent, are sympathetic to Moscow. The remainder, he believes, will bend whichever way the wind blows.

Miroshnichenko served with Ukrainian peacekeeping troops alongside NATO forces in Iraq and was impressed by American efforts to interact with Iraqi civilians. He was instrumental in the Ukrainian army’s formation of its own Civilian Military Cooperation (CIMIC) unit. It operated where Ukrainian peacekeepers served and is now deployed across the Donetsk and Luhansk provinces, which are split between Ukrainian-held and pro-Russian areas.

He thinks the unit can help persuade the undecided to bend Ukraine’s way by providing information and practical help to those affected by the war, particularly the 1.8 million internal refugees who overwhelmingly fled to Ukrainian-held territory from Russian-occupied areas.

Miroshnichenko is now vice president of Ukraine’s Youth Atlantic Council, which is affiliated with NATO and acquaints young Ukrainians with Western values.

He says, “The government has to convince those who might support the separatists that it is serious about fighting corruption and implementing reforms in the economy, health, education [sectors]. Kyiv has to show that it can provide security and stability and that democracy and Ukraine’s independence will bring benefits to everyone.”

He believes it must be a priority to effectively counter the distorted and fake Russian news bombarding areas close to the conflict areas. He says, “We are trying to build a democracy and so we can’t forbid people’s right to choose; we can’t just switch the Russian channels off. Therefore, those responsible for Ukrainian TV and radio should provide high-quality programs that can out-perform Russian broadcasts.”

He adds, “We need a Marshall plan for the east of Ukraine that will prove to the people here that the West is indeed their friend.”

In Lysychansk’s main square, shielded by blue and yellow metal sheeting, are the legs from a statue of Lenin. Thousands of such statues have been torn down since Ukraine’s 2014 pro-Western revolution. For Ukrainians, they are symbols not only of Communism but of Russian rule.

Most of Lysychansk’s Lenin statue toppled when a hawser was cast around his neck and tugged by a truck. However, the legs obstinately resisted buckling. Thus they remain, hidden from view. Yet, like Lysychansk inhabitants who may not wish Ukraine well, their presence is known to all.

Askold Krushelnycky is a freelance journalist based in Washington, DC. His work has been published by Foreign Policy, The Independent, the Sunday Times, and the Chicago Tribune, among others.