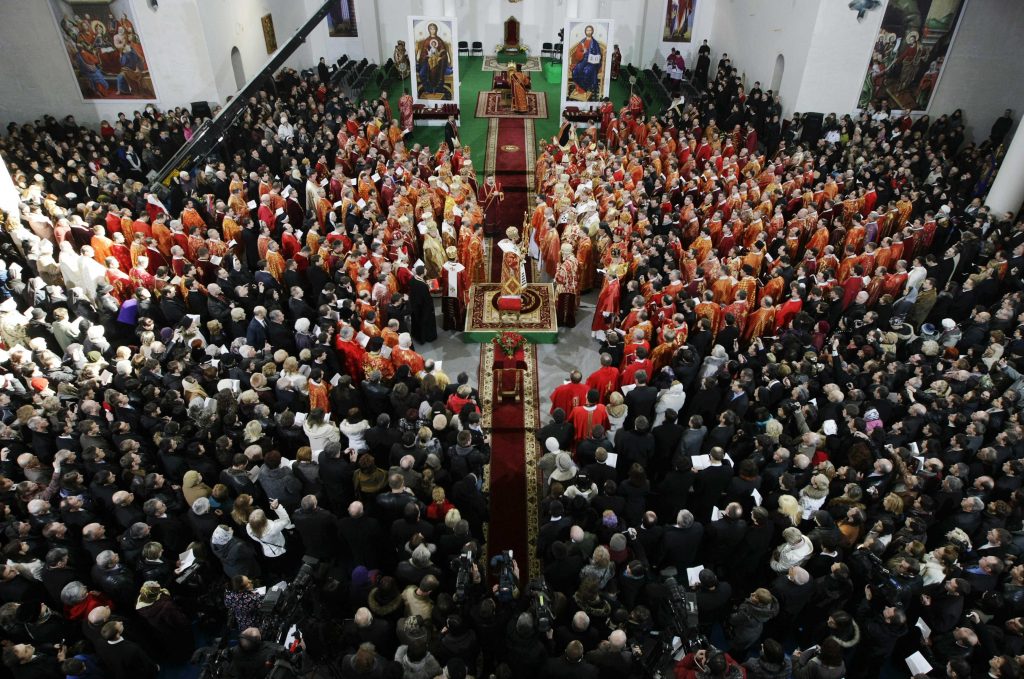 Seventy years ago, on March 8-10, 1946, under orders from Josef Stalin, an illegal “synod” of Kremlin-controlled clergy gathered in the city of Lviv, recently absorbed into the Soviet Union as part of the settlement of World War II. The purpose of the gathering was to liquidate the independent existence of the Ukrainian Greek Catholic Church, or rather to “reunite” it with the Russian Orthodox Church. This flimsy ruse derived from the church’s origins as a result of the Union of Brest in 1595 when thousands of faithful and their clergy—the Metropolitanate of Kyiv-Halych—broke away from Eastern orthodoxy to place themselves under the authority and pastoral protection of the Latin Catholic Pope of Rome.

The next three-and-a-half centuries established the church as a thriving spiritual center that was closely connected to rising social and intellectual movements as they struggled to define an identity for nascent Ukrainian populations that found themselves under the serial domination of empires and states in the region.

By the middle of the twentieth century, the Ukrainian Greek Catholic Church (UGCC) included over three thousand parishes, 4,440 churches, five seminaries, and 127 monasteries. Over three million believers were served by three thousand priests, ten bishops, and the metropolitan at the head of the church. As Stalin’s regime moved to subdue and absorb the Western Ukrainians, it was clear that this large and vibrant institution that answered to an authority outside of the state would continue to nurture the same patriotism and independent spirit that had proved so problematic during the first Soviet occupation in 1939-1941. Moreover, during the Second World War, even though the Communist Soviet regime had moved away from strict atheism, recognizing that religion could play a role in supporting the war effort, the imperative to control all religious institutions remained. The “reunification” of the UGCC with the Russian Orthodox Church emerged as the solution. A “synod” was assembled without the participation of any UGCC bishops; those who had been coerced into attending cast their votes and the church was officially absorbed into the Orthodox Church of the Moscow Patriarchate along with most of its property. In a cynical move that reinforced the decision, the announcement was made on the first Sunday of Easter Lent, on the 350th anniversary of the Union of Brest. As a result, the UGCC became the largest outlawed church in the world.

Harsh repressions followed. Ukrainian Catholic priests were beaten, tortured, and given long prison sentences. Tens of thousands of religious laity met the same fate. UGCC Metropolitan Josef Slipiy was exiled to a hard labor camp in Siberia. The church went underground: services were held in the forests, or in private homes where they dared. Children were baptized in secret and religious rites performed clandestinely, while the Soviet state continued its assault on priests, monks, nuns, and the Catholic faithful, offering respite within the Russian Orthodox Church or repression as the price for refusal to cut ties with the bishop of Rome.

And yet the flame of resistance endured and provided inspiration as stories of brutality and courage were shared among trusted family members and passed down from one generation to another. Western Ukraine, with its aspirations and support for an independent Ukraine, remained a hotbed for anti-Soviet sentiments and religious diversity. When the long struggle of the underground church finally ended in 1989, only three hundred aged priests remained.

The vitality of the church quickly reasserted itself, with the support of the diaspora, the thousands of Ukrainians who had fled their homeland during the war and settled in North America, Latin America, Europe, and as far afield as Australia.

Today, with a spiritual center in Rome, the recently reestablished Ukrainian Catholic University in Lviv and newly built cathedral in Kyiv, the church has thirty-three eparchies and exarchates and fifty-three bishops on four continents, with over three thousand priests whose average age is thirty eight.

The church’s influence on Ukraine’s social and political life has been evident since independence. Students from the Ukrainian Catholic University in Lviv were some of the first to come to Kyiv in 2004, to support the ideas and aspirations of the Orange Revolution against an authoritarian regime. And in 2013-14, Ukraine’s Revolution of Dignity was suffused with the moral values and tolerant attitudes propounded by the church. Its clergy were a daily presence on the Maidan throughout the three months of struggle. Together with the other churches and religious denominations of Ukraine, the UGCC has helped to create an ecumenical and diverse environment for social movements in Ukraine. As a bulwark against authoritarianism, this spirit of ecumenism continues to be Ukraine’s best instrument as it struggles toward becoming a democratic and prosperous state.