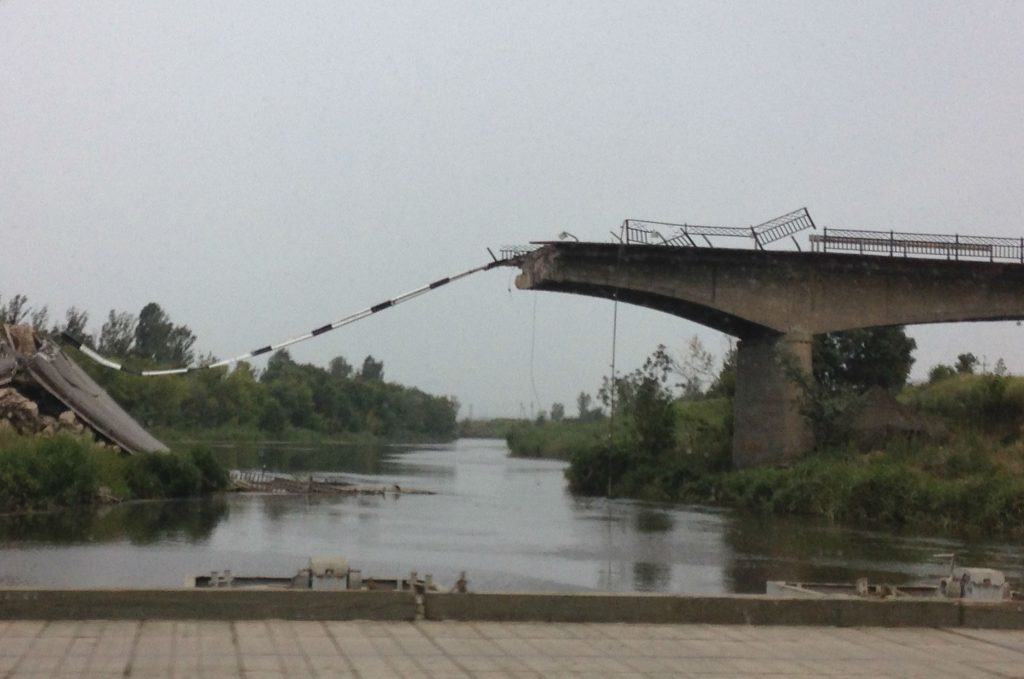 In an article in Dzerkalo Tyzhnia, Horbulin argues that the main participants in the war have exhausted themselves. The Donbas has become a black hole from which Russia, its creator, cannot escape.

Hybrid war succeeded in Crimea, but it failed in the Donbas. Ukraine’s economic blockade of the occupied territories has strained Russia financially. Separatist leaders in Donetsk and Luhansk are incompetent, forcing Moscow to augment its military advisers with administrators. Returning Russian “volunteers” are a problem for Moscow, which has already asked rebels to create a border force to prevent former fighters from coming home to make trouble.

The Kremlin says that sanctions aren’t hurting, but cheap credit is gone, the ruble has plunged, and these ills will only get worse, Horbulin predicts. Russia’s trade has shrunk by one-third in recent months. Capital flight in 2014 totaled 150 billion dollars. This is why Russia desperately wants to end Western sanctions.

Russia’s leaders thought that energy exports, nuclear arms, and a role in Middle East negotiations made them immune to European and US pressure. The truth was different, Horbulin notes. Russia’s elite now faces the reality of damaged relations with the West. Direct Russian military intervention in the Donbas would change the game, but it would also destroy relations with the West. Horbulin sees confrontation as unlikely.

The black hole in eastern Ukraine has drawn the European Union into its orbit, forcing Brussels to take a stand. At first, Europe was “anxious” and “concerned,” but Europeans no longer shy away from the terms “Russian aggression,” “Kremlin propaganda,” and even “tribunal.”

The Ukrainian crisis has brought internal EU conflicts into the open, revealing how deeply Moscow has penetrated Europe’s political system, particularly in the Czech Republic, France, Germany, and Greece. Horbulin recalls the Stalinist Comintern, which promoted communism in Europe in the 1930s. Today’s revived European Comintern influences European countries and the EU as a whole. Greece’s Siriza party on the left, the French National Front on the right, and individual European Parliament MPs are all under Moscow’s sway and funding, a problem that Brussels cannot ignore.

EU sanctions also undermine the EU’s unity. Countries with economies heavily dependent on trade with Russia are eager to end sanctions, which they see as being imposed at their expense.

Russian aggression has pushed Ukraine and its elites out of their idealistic comfort zones and into the harsh realities of realpolitik. While Horbulin sees a military solution as highly unlikely, Kyiv cannot ignore the long-term Russian military threat, particularly in light of Moscow’s 2014 military doctrine calling for a multi-billion dollar modernization of its armed forces.

The solution to the conflict in the occupied territories must be guided by cold pragmatism. Horbulin writes that the question of NATO membership “no longer splits us along ideological lines,” but rather is “indispensable to our security.”

The Donbas syndrome: a national catharsis?

The Donbas is no longer central to Kyiv’s economic calculations. The conflict has destroyed the myth that the Donbas was the lynchpin of Ukraine’s economy, something that even those in the Donbas have realized.

The conflict has realigned the prestige of professions and social roles in Ukraine. For years, Ukrainian attitudes toward the military were ambivalent. That has changed profoundly. The socioeconomic prominence of miners, long glorified in the Soviet past and further mythologized in the post-Soviet decades, is fading, as the war has shut practically all mines in the region. More than a million internally displaced refugees are changing the country’s social fabric. Many elderly residents have been abandoned in the occupied territories, and the number of orphans and homeless is growing. Ukraine is forced to confront the social reintegration of war veterans, many of whom return from the Donbas traumatized and permanently disabled.

Communication with Ukrainians who have remained in the occupied territories is another challenge. Not all those who stayed behind are supporters of the occupying forces. Kyiv must maintain contact with those people so they do not feel abandoned, writes Horbulin.

Ukraine has begun to deal with the occupied territories realistically. While Kyiv is not ready to abandon its eastern flank, it is not ready to accede to the “special status” demands from the separatists and Moscow, Horbulin asserts. If Moscow expects to saddle Ukraine with the costs of rebuilding the Donbas while wielding the “special status” card, it is mistaken. Ukraine will hold firm, even if that means building a wall along the border of the occupied lands. Moscow does not want to bear the cost of rebuilding and maintaining what it destroyed. Even Crimean subsidies are being gradually reduced, creating dissatisfaction among those who welcomed Russia.

Ukraine is grateful for Europe’s unified position, but the EU has not achieved any success because Moscow seeks to impose its own terms on the Europeans. This is a traditional Soviet and now Russian diplomatic tactic: adopt an uncompromising position and hold out to the end. (The Soviet Foreign Minister Andrei Gromyko, nicknamed “Mr. No” for his obstinacy, comes to mind.) The goal of this uncompromising position is to force your opponent to agree to what was originally deemed unacceptable. Today this tactic has only sharpened the confrontation with the West.

Russia and the West come to this new cold war with varied resources and imagine their victories in quite different terms. Russia’s elites seem unperturbed by a new cold war. This is a mistake because today’s Russia is weaker than the USSR was. Russia depends greatly on the world economy, making Western economic pressure more effective than in the past. The Soviets lost the cold war, in no small part because they overextended themselves in the arms race, something that today’s Russia is attempting to repeat.

It is telling, Horbulin concludes, that the only way Russia can pose a threat to the West is through banal saber rattling. At a time when developed countries settle their differences through diplomacy, Russia can only offer the dead idea of the Russkyi Mir—pan-Slavic Orthodox fundamentalism —or threaten to reduce the West to nuclear ash.

The war in eastern Ukraine is very close to a dead end. The unwillingness of Moscow and its separatist minions to conduct reasonable peace negotiations has created a stalemate without a visible exit. This behavior only exacerbates the situation in the war zone.

Many worry about what will happen on January 1, 2016, when the Minsk Agreement expires. We need a smart, realistic, and mutually acceptable agreement to fill that looming and dangerous void.

Ukraine traditionally has either pretended that tomorrow’s problems do not exist, or that they are so far in the future that there is no point worrying about them. This war is a problem that can and must be solved today.

Irena Chalupa is a Nonresident Fellow at the Atlantic Council. For the 2015-2016 year, she is a Fulbright Scholar researching Soviet-era Ukrainian political prisoners.

Image: A destroyed bridge on the outskirts of Slovyansk, Ukraine. Credit: Joanna Rohozinska