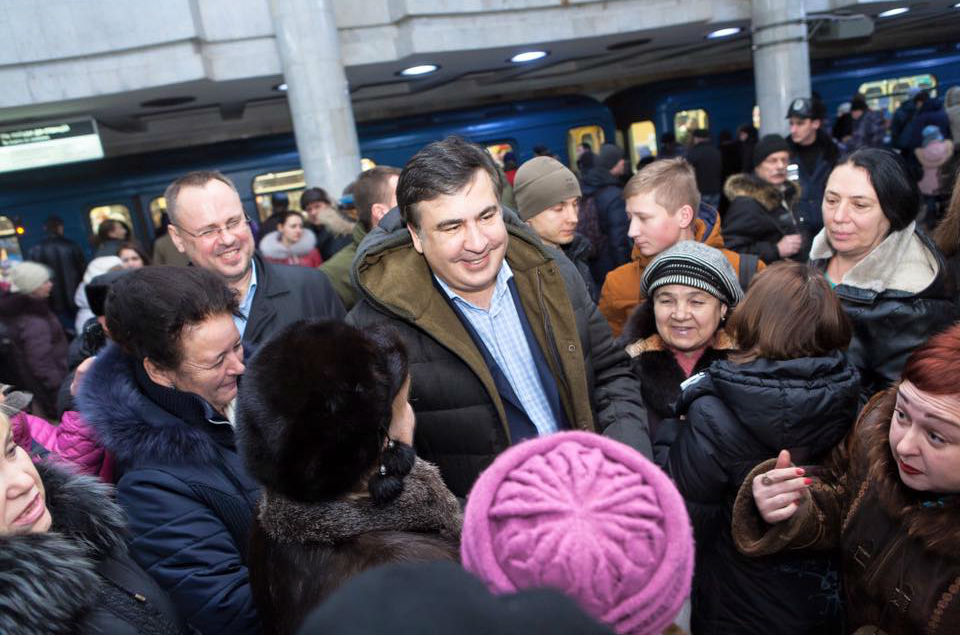 Dynamic, revolutionary, modernizer, narcissist, opportunist: all of these are terms that have been used to describe Mikheil Saakashvili, the former president of Georgia and would-be Ukrainian leader. Over the course of a storied political career, all have been true to varying degrees. But what is true now is that Saakashvili has exceeded his expiration date as a positive force, both as a transformative figure in his homeland and as the Black Sea region’s foremost reformer and opponent of Russian President Vladimir Putin.

After acquiring a Western legal education, Saakashvili first joined and then broke from then-Georgian President Eduard Shevardnadze’s hopelessly compromised government. Corruption, criminal gangs, a lack of economic opportunity, and the failure of basic utilities cast a pall over Georgians’ daily lives. By many accounts, Georgia was a failed state.

Saakashvili’s meteoric ascent to power began with his resignation as Minister of Justice in 2001, whereupon he co-founded and led the United National Movement (UNM). It continued with his local electoral success in Tbilisi in 2002 and culminated in his rallying of popular support against the fraudulent results of the 2003 parliamentary elections. His peaceful Rose Revolution marked the first indication that people of some post-Soviet republics were willing to struggle toward the hopeful prospect of Western liberal democracy rather than retreat into strongman models.

Saakashvili won an overwhelming 2004 presidential victory over minimal opposition and together with his partners, then-Prime Minister Zurab Zhvania, the man who had brought him into public life, and Nino Burjanadze, the chairman of parliament who had supported him at the decisive moment of the revolution, they spearheaded a whirlwind of decisive reforms. Zhvania’s controversial death in 2005 and Burjanadze’s falling out in 2008 consolidated Saakashvili’s power and enhanced opposition concerns.

Saakashvili’s feverish efforts in rooting out corruption among the police and in public services, cracking down on crime, overthrowing a regional potentate, rapidly developing infrastructure, reforming agricultural land use, and challenging traditional culture laid the foundation for his eventual downfall. The cover up of banker Sandro Grigvliani’s murder and takeover of the only nationally broadcast opposition television station demonstrated the overreach of Saakashvili’s security forces. Thousands claimed lost property to the pace of development through the use of eminent domain while a handful profited; political opponents promoted the perception that foreigners were acquiring land unfairly and forcing Georgians to accept abhorrent social values. His successes made important contributions to Georgia’s quest for formal membership in Europe and his failures framed an authoritarian narrative.

Saakashvili’s reforms and Western aspirations, along with Georgia’s personnel contributions to US military efforts in Afghanistan and Iraq, caught the eye of President George W. Bush’s administration and led to its fervent advocacy for the unprecedented step of guaranteeing future NATO membership to Georgia at the 2008 Bucharest Summit. In response, Russian “peacekeepers” allowed South Ossetian separatists to militarily harass the Georgians, and goaded Saakashvili into trying to defeat them through combat before Russia could reinforce them and formally occupy both South Ossetia and Abkhazia.

He faced a no-win situation: surrender the territory without struggle and be labeled a coward, or adhere to the nation’s history of fighting desperate battles against impossible odds, thereby inviting both international and domestic condemnation. The objectives of Russia’s invasion were to thwart Georgia’s NATO aspirations and bring about Saakashvili’s overthrow rather than the forcible annexation of Georgia; their failure to achieve those goals in the otherwise disastrous August War almost certainly led Saakashvili to conflate the nation’s resilience with his own.

The deep pockets of the nation’s wealthiest man, Bidzina Ivanishvili, and his Georgian Dream coalition of contradictory opposition parties in the 2012 parliamentary elections proved to be Saakashvili’s undoing. The timely release of prison rape videos that demonstrated both official cruelty and homophobia, in a close-knit nation that at the time had the third highest per capita prison population, synthesized concern over how the government’s actions might belie the public’s interests, and proved instrumental in voters choosing Ivanishvili’s Georgian Dream. Saakashvili’s quick acceptance of his party’s loss—the first transition of power by the ballot in the nation’s history—and the subsequent yearlong cohabitation as he served out his presidential term during the first year of Georgian Dream’s rule and Ivanishvili’s time as prime minister—secured his place among world leaders of consequence.

The likely threat of Saakashvili’s prosecution for alleged abuses of office by Ivanishvili’s government led to his self-imposed exile to the United States; but shortly thereafter, the success of the 2013 Euromaidan uprising in Ukraine led to the opportunity for Saakashvili’s political resurrection. His reputation as a reformer and Putin opponent made him an attractive recruit in 2015 for his friend from university, Ukrainian President Petro Poroshenko, to first serve as a formal government adviser and then as governor of Odesa oblast. Saakashvili enjoyed renewed popularity among Ukrainians facing many of the same challenges as Georgians prior to the Rose Revolution: crime, corruption, and poor utilities. But as a former president with only limited official capacity to circumvent the deeply entrenched Ukrainian kleptocracy and, as Saakashvili has said on occasion, not one to put friendship before the cause, he began developing a separate political base from his benefactor by the end of 2015.

Despite Saakashvili’s willingness to give up his Georgian citizenship and assume office in another country, he continued to hold onto power within UNM. Most of Saakashvili’s key governing compatriots—former Prime Minister Vano Merabishvili, former Interior Minister Bacho Akhalaia, and former Tbilisi Mayor Gigi Ugulava—had gone to prison after Saakashvili fled. Former Parliament Chairman Davit Bakradze had been the most popular UNM leader since 2012, yet Saakashvili continually sought to impress upon Georgians that he and the UNM are synonymous and inseparable. In the run up to the 2016 parliamentary elections, Saakashvili’s outsized personality in the media overshadowed Bakradze.

Saakashvili was Nixon Agonistes unbound; first he boasted that UNM’s victory in 2016 was inevitable, that victory would lead to his return (presumably as prime minister), and that the Rustavi-2 television exit poll results should determine the legitimacy of official election results; he then called for UNM to boycott the runoff elections and advocated that UNM forgo the seats it had won in parliament, only to finally reverse himself. His hubris has led twenty of the twenty-seven members of parliament who were elected in the UNM party bloc, including Bakradze, to form Movement for Liberty–European Georgia, hoping that a pro-Western opposition party in parliament without Saakashvili may have a better chance of success in future elections. Yet Saakashvili’s image as their champion continues to hold sway over most UNM activists and elected officials.

Without any prospects for a return to power in Georgia, and having possibly doomed the chances of the current leading opposition parties in and out of parliament from being able to compete with the Georgian Dream, Saakashvili has turned his attention back to Ukraine. Since he doesn’t meet Ukraine’s residency requirement of ten years, he will attempt to lead a new party into parliament rather than seek the presidency in 2019.

Bereft of a governing position and presumably lacking in reliable finances, Saakashvili continues to pick and choose among his limited options in the two countries. He cannot resist maintaining a presence in Georgia while fervently casting about for a new path to power in Ukraine. Those who participated in his ascent to power in Georgia continue to pay the price for his time in office. Those he seeks to lead in Ukraine must contend with a man of interchangeable positions and allies, as he seeks out whatever he feels best serves his own interests at the moment. Either way, the once-visionary revolutionary appears to see no greater good to be served, except his own ambition and pursuit for the roar of whatever crowd will listen.

Luis Navarro served as senior resident director for the National Democratic Institute of International Affairs in Georgia from 2009 to 2014 and as both presidential campaign manager and the last chief of staff for then-US Senator Joe Biden from 2007 to 2009.