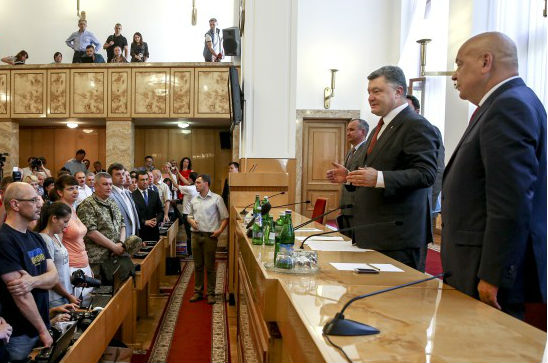 Ukrainian paramilitaries pose an increasingly existential threat to Kyiv. Earlier this year, Kyiv launched an initiative to bring them under their direct control. But despite their nominal subordination to Kyiv’s security services, these groups operate with minimal supervision and maintain financial independence. Their fighting capacity breeds instability and violence. More recently, Right Sector is undermining Kyiv with acts of violence, battles over contraband, and even direct challenges to Kyiv’s legitimacy on a political level. Ukraine and its partners must act to disarm the paramilitaries and to address the corruption which they exploit.

Despite their nationalist rhetoric, some paramilitary groups have forced showdowns with the Ukrainian Armed Services. The past few months have seen an escalation in their relationship, threatening instability across Ukraine. In April, Ukrainian paratroopers surrounded a Right Sector base in Dnipropetrovsk and demanded that its fighters disarm and disperse. This project failed, and Kyiv distanced itself from the operation. In June, the head of the military-civilian administration of Luhansk oblast Hennadii Moskal battled against the Tornado Battalion to wrest control over key transit routes and industrial facilities away from the paramilitary group. He was ultimately successful, arresting its leadership and removing its fighters. Still, paramilitaries remain armed in Luhansk. Kyiv has left management and control of such groups up to the local authorities.

On July 11, police, local authorities, and Right Sector members clashed in Mukacheve, a village in western Ukraine, with grenade launchers and machine guns, struggling for control over a lucrative cigarette smuggling operation and contraband. Right Sector fighters subsequently fell back into the mountains, but small-scale clashes continue in nearby villages.

The state’s response to Mukacheve has been firm. Security forces moved on Right Sector bases across the region, and Ministry of Internal Affairs and National Guard troops are reinforcing their positions with military hardware. In response, Right Sector launched its own nationwide campaign. Dmitro Yarosh, member of parliament and head of Right Sector, demanded that the leadership of the Trans-Carpathian oblast be punished for firing on his troops. Yarosh is also dragging out negotiations, accepting Right Sector’s role in the conflict but refusing to renounce violence should security forces attempt to capture Right Sector fighters. Violence has continued sporadically in the west, with two masked fighters firing on local authorities near a strategically vital train tunnel in Lviv oblast. Other unknown militants attacked a mine in Vinnytsia oblast, attempting to take hostages and wounding several. Right Sector forces also erected their own checkpoints to halt the movement of military hardware, building two in Lviv oblast and one on the road out of Kyiv.

In the meantime, Yarosh is laboring to transform this conflict into a nationwide struggle. Rechristening itself as a national-liberation organization, Right Sector organized rallies of uniformed supporters across Ukraine, including Cherkasy, Dnipropetrovsk, Kramatorsk, Kyiv, Lviv, Mariupol, Mykolaiv, Odesa, Sumy, and Zaporizhia. Yarosh is pushing for a national referendum of no confidence in the Kyiv government, and is establishing centers nationwide for its organization. He is demanding the full legalization of volunteer battalions and the outright rejection of the Minsk agreements. Yarosh even called on the armed services, Ministry of Internal Affairs, national guard, and border services to refuse to fulfill the orders of their superiors.

Kyiv’s resolute response to the violence in Mukacheve demonstrates that the government recognizes the threat posed by paramilitaries. Prime Minister Arseniy Yatsenyuk launched an investigation into the customs service to crack down on smuggling. The Prosecutor General indicted captured Mukacheve Right Sector fighters for terrorism. President Petro Poroshenko fired the whole leadership of the Trans-Carpathian oblast, naming former Luhansk head and fierce paramilitary opponent Hennadii Moskal interim governor. Moskal has wasted no time in condemning Right Sector as criminals, thugs, and corrupt actors. But, while important, these steps are unlikely diminish Right Sector’s organized crime operations or destabilize paramilitaries on the national level. By permitting the paramilitaries to retain a prominent role in the war in Ukraine’s east, Kyiv has inadvertently allowed nationwide criminal organizations to develop.

In the short-term, Ukraine must meet Right Sector’s national challenge firmly and decisively. But the long-term challenge is just as urgent: Ukraine needs to disarm and disband paramilitary militias and integrate their fighters into its armed services once and for all. It needs to cooperate with its international partners to prevent paramilitaries from receiving supplies and recruits from abroad. And the European Union and United States need to provide funding and technical assistance for demobilizing the paramilitaries. Only by cementing itself as the sole legitimate source of force in Ukraine can Kyiv safeguard the rule of law and maintain its European trajectory.

Peter Sattler is an intern at the Atlantic Council.