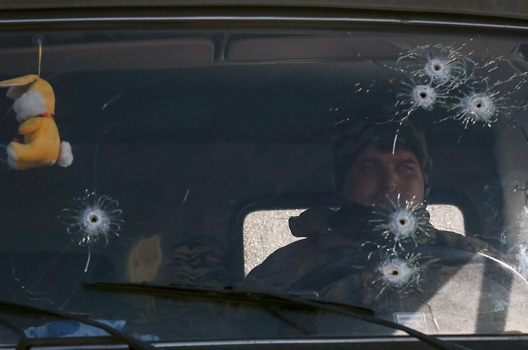 A member of the Ukrainian armed forces drives a military vehicle near Artemivsk, eastern Ukraine, on February 25. Ukraine's military said on February 25 that none of its troops had been killed at the front in the last 24 hours and only one had been wounded, with a spokesman describing it as the first day with no fatalities in "at least several weeks." (REUTERS/Gleb Garanich)

Ukraine and its allies hope this month’s cease-fire deal agreed with Russia and Russian-backed rebels brings relative calm to southeastern Ukraine. But the Minsk agreement is deeply flawed, and there is every chance it may yet unravel, even if it holds for the short term.

The accord’s greatest flaw is in letting Russia maintain unsupervised control of Ukraine’s border in the Donbas region until the end of the year. This will mean Russia can freely continue supplying weapons and equipment to locally controlled “people’s militias,” armed formations that will now expressly be permitted under the agreement. Moreover, while the accord calls for the withdrawal of “foreign armed formations, military equipment, and mercenaries,” it creates no effective regime for enforcing a pullout of those Russian military assets from the Kremlin-engineered separatist enclave in the Donbas.

Despite these flaws, the Minsk agreement buys desperately needed time for the United States and other allies of Ukraine to lay essential groundwork to help Ukraine survive Russia’s assault. At a minimum, this will mean helping Ukraine to stabilize its reeling economy, absorb and assist more than 1.6 million people uprooted by the war, and rebuild its defense forces.

Last month’s multi-front offensive in the Donbas by Russia and its well-armed proxy forces showed their superiority. It helped European leaders recognize that despite improved training, cohesiveness, and equipment Ukraine’s army is no match for the superior growing arsenal of the aggressor and must be modernized. Still, in the main, most European leaders are nervous about growing support in the US Congress and in the Obama administration for sending lethal defensive weapons.

European military support for Ukraine could, however, involve the politically easier step of sending essential components (including dual-use technologies) to help it develop its own weapons systems. But that will not be enough. Ukraine urgently needs anti-tank and other defensive weapons, surveillance drones, advanced counter-battery radar systems, and anti-aircraft systems that would raise the costs to separatists and Russia of new attacks.

US Should Arm Ukraine

President Barack Obama, therefore, should approve the rapid transfer of weapons to enhance exactly that Ukrainian deterrent capability. At a minimum he should agree to send such aid quickly in the event all-out warfare resumes. Ukrainian soldiers could be given training in the key weapons systems to be ready to immediately use them.

Crucially, no announcements should be made until weapons are in place and trained Ukrainians are ready to deploy them. A public announcement, coupled with piecemeal delivery of too few weapons, would dangerously fuel Russian propaganda without delivering deterrent firepower.

Western critics of supplying weapons have protested that this would be insufficient to let Ukraine defeat an all-out Russian invasion. That is obvious, but misunderstands the purpose of such arms: to let Ukraine increase the costs to Russia of a new offensive. Such an improved defense, combined with heavy economic sanctions and Russia’s stalling economy, could be enough over time to force Russian President Vladimir Putin to agree to a lasting peace.

Obama’s decision will rest on whether he concludes that weapons supplies would lead Putin to a disproportionate escalation of Russia’s current war-by-proxy, or even a conventional invasion by regular Russian forces. Escalation is possible; Russia already has escalated its proxy war—in the absence of any Western military aid—by providing heavy weapons, Russian mercenaries, finance, and training.

The Limits of Russian Action

The tougher question is whether military aid to Ukraine would trigger a direct invasion. The record of Russia’s engagement in the Donbas war suggests it would not.

According to Ukraine’s armed forces chief, General Viktor Muzhenko, thousands of Russian forces are in southeastern Ukraine, but are mostly not engaged in direct combat. Their role is mainly command and training of the separatist militias, intelligence gathering, the operation of long-range artillery, and targeting of Ukrainian forces. Russia has only once deployed large military units in direct combat—at Ilovaysk in August, to beat back a Ukrainian offensive that threatened to defeat the proxy forces, which then were weaker and more lightly armed.

Yet even under these rules of engagement, there have been significant Russian casualties and Putin’s government has taken extreme measures to hide this fact—and the massive Russian military presence in Ukraine—from the Russian people. The Kremlin has kept secret its burials of paratroopers and tank drivers killed in Ukraine; has sent thugs to beat reporters and dissidents who have documented Russian troops’ presence in the war; and has warned dead soldiers’ families not to discuss their losses in public.

The Financial Times reported last month that Putin agreed to an initial ceasefire in September only after Ukrainian President Petro Poroshenko threatened to make Russia’s casualties a domestic political issue for Putin. Poroshenko threatened to reveal hundreds of Russian military dog tags that Ukraine’s forces had collected during combat, and to directly inform the mothers of these dead Russian soldiers. (Russia’s “soldiers’ mothers committees” are a potential pole of opposition to Russia’s involvement in the Ukraine war.)

Repeated Russian opinion polls have underscored the good reason for Putin’s caution. While Russians support a right to independence for Donbas, and Russian military help to the proxy “people’s republics” in Donetsk and Lugansk provinces, a November 2014 survey found 58 percent of respondents firmly opposed to direct military intervention in Ukraine. Asked whether they would support the participation of family members in combat, 68 percent said no. [See details on Russian polling data below.]

Putin shapes his foreign policies to maintain his domestic support. Amid Russia’s  deepening economic decline, he would be loath to ignite a new source of opposition sentiment.

Thus Russia is most likely to rely on its recruitment, arming, and financing of proxy forces in Donbas. But with casualties high, the pool from which it can keep sending mercenaries—including its own soldiers “on holiday,” army veterans, ultranationalists, and criminals—is not without limit.

No one, of course, can offer absolute guarantees about Putin’s actions, but the overwhelming preponderance of evidence suggests there are limits to Russia’s capacity for escalation. So the quiet provision of weapons, and strong financial support to Ukraine—plus tough economic sanctions on Russia—are the best way to establish the greater strategic equilibrium required to push Moscow to a durable peace with Ukraine.

Here are a few of the recent findings by prominent Russian public opinion pollsters, as published in Russian media, with links to their sources.


Adrian Karatnycky is a senior fellow with the Atlantic Council and co-director of its Ukraine in Europe initiative.