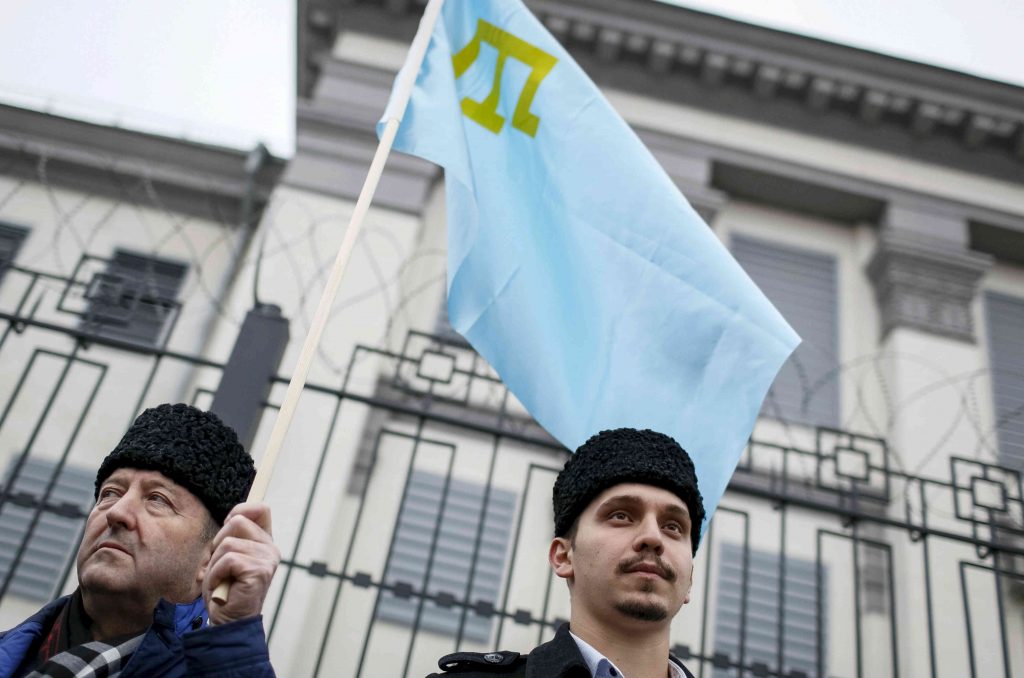 Crimean Tatars attend a rally outside the Russian embassy in Kyiv, Ukraine, November 6, 2015. Tatar activists and their supporters are protesting against the repression of Tatar rights on Ukraine's Crimea peninsula, annexed by Russia in March 2014, local media reported. Credit: REUTERS/Gleb Garanich

Editor’s Note: This piece is adapted from a speech Dr. Christoph Bergner, a member of Germany’s Bundestag, gave at the Konrad-Adenauer-Stiftung Foundation on October 21, 2015.

I would like to thank the organizers of this event for making human rights issues in Crimea the main topic. Even if other news is currently making headlines, we must not lose sight of the circumstances on the peninsula and the consequences of Russia’s unlawful seizure. In assessing the situation, the European Union and United States must take into account not only international law but also human rights concerns.

Several human rights issues currently occurring in Crimea have already been raised at this event, including restriction of freedom of assembly and freedom of expression, pressure to become Russian citizens, repressive measures against Crimean Tatars, repressive measures against certain religious groups, and the legitimization and instrumentalization of paramilitary thugs.

The region was certainly plagued by problems during the decades it belonged to independent Ukraine, which itself exhibited considerable problems. Nevertheless, with Russia’s annexation, Crimea is experiencing a dramatic change for the worse in regard to human rights.

The Russian Federation’s laws, regulations, and other conditions now apply de facto to the peninsula. This is more serious than it may seem at first glance. The introduction of these Russian “conditions” means not only that Ukraine’s sovereign regulations been replaced by those of the Russian Federation, but also that the region has been integrated into Russian administrative structures.

The introduction of Russian conditions means the implementation of an altered set of values and a certain worldview, and it includes human rights violations. As such, the annexation of Crimea not only changed the region’s flags and national emblems; it also changed its system of political values.

With President Vladimir Putin’s third term, it became apparent that Russia’s elite not only represents a different worldview from the West, but consciously wants to define—and consolidate ideologically—Russia as an antipode to the West. But in contrast to the Cold War era, it is no longer a matter of the “politico-economic” antagonism between socialism and capitalism. Instead, “Eurasianism” best encapsulates Putin’s guiding principle.

This ideology presents itself as a counter-concept to the West’s social, political, and international order as exemplified by the OSCE’s 1990 Paris Charter. Mikhail Gorbachev referred to this order as the “all-European House.” But the guiding principle of Putin’s politics is apparently no longer aligned with these notions; it is increasingly about Eurasian concepts.

Alexander Dugin might be the most prominent representative of this Eurasian counter-concept. For years, he has deeply influenced the intellectual contingent of Russia’s elite, as well as Putin’s propagandists, and he has already gained a following in Western Europe.

The premise of Dugin’s ideology is that there is a Russian special way. Building on a glorious past, it assigns Russia a special, almost missionary, role in world affairs, and justifies hegemonic claims in the region.

Eurasianism has strong totalitarian traits. Liberal and democratic principles are viewed as corroding and obstructing the implementation of a strong state. Maintaining and strengthening the system take priority over individual rights. After all, only a strong state can fulfill the cultural mission that Russia has been assigned, according to this ideology. Thus, the good of the individual is subordinated to the state, as can be seen in the numerous trials currently occurring in Russia. And the state’s strength is measured by its ability to assert its interpretation of the past, present, and future of social and political developments.

It follows, then, that Putin’s government adheres only to its own standards, both internally and externally. Complying with international agreements and respecting universal human rights takes second billing, often serving as simply an obstacle along the way.

The rights of national minorities

In order to analyze the situation of Crimean Tatars, one must examine the rights of national minorities in Russia. Putin called Russia a “unique multi-ethnic civilization,” and Russian politics revolves around the formation of a multiethnic state in the most conflict-free way possible.

At the same time, the government considers itself the guardian of Russian or Russian-speaking people abroad and the keeper of the Russkiy Mir (Russian World). The need to protect Russian-speaking minorities from supposed anti-Russian sentiments that arose in the course of the Euromaidan was suggested as the primary motive for Russian actions against Ukraine.

With regard to Crimea, this was an inadequate motive.

Prior to Russia’s annexation, the Autonomous Republic of Crimea was endowed with its own constitution and parliament, and had special rights within Ukraine; nowhere were the interests of Russian-speaking people outside of Russia so strongly taken into consideration as there. In 2001, 78.5 percent of the population considered Russian their mother tongue; almost 10 percent spoke Crimean Tatar, and another 10 percent spoke Ukrainian. Similarly, four schools there were taught exclusively in Ukrainian, fifteen in Crimean Tatar, and roughly 500 were Russian-language schools.

In the fight for their rights before Russia moved in, Crimean Tatars appealed to Ukraine’s international obligations, such as the Conventions of the Council of Europe. Ukraine may not have found it easy to go along with the Crimean Tatars’ demands, but at least there was a responsive agenda that brought in international committees.

In the Soviet Union’s successor states, the realization of minority rights is closely linked to the historic reappraisal of ethnically motivated repression that occurred during Stalin’s time. Within Ukraine, Crimean Tatars had similar interests to Ukraine itself in the reappraisal of the consequences of Josef Stalin’s terror. In contrast, within Russia, Crimean Tatars come up against a historical narrative that judges Stalin’s treatment of his own people ever more ambivalently.

Although Putin produced a decree on the rehabilitation of the “punished peoples of Crimea”— namely Crimean Tatars, Germans, and Greeks—shortly after the annexation of Crimea, local authorities simultaneously used their administrative resources to put Crimean Tatars, the sole homogenous group that denounced the union, under immense pressure. It is telling that, on the 70th anniversary of the deportation of Crimean Tatars, Crimea’s chief prosecutor placed a ban on assembly in Crimea.

In conclusion, the human rights situation in Crimea today is deplorable. When the region was initially annexed, attempts were made to portray it as an “act of deliverance” for the people of the peninsula. But with the imposition of Russian conditions, little has remained of this expectation.

Christoph Bergner is a member of Germany’s Bundestag and the Christian Democratic Union. This speech was translated from German to English by Simon Hoellerbauer.