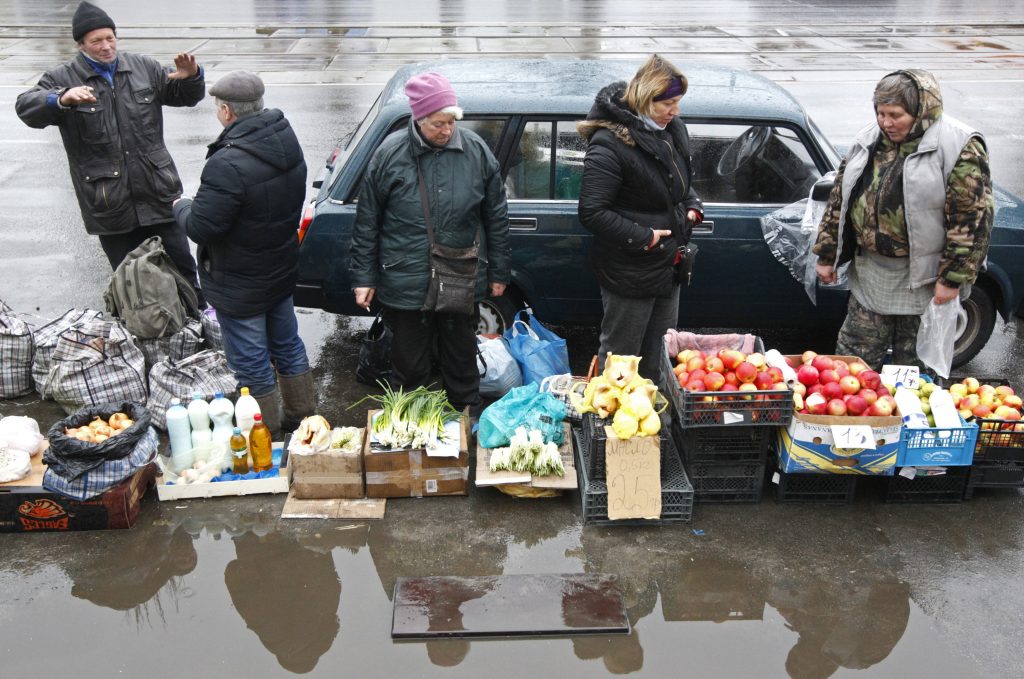 As Kyiv Slashes Spending, the Economy’s Real Shrinkage This Year May Be 10, Not 6, Percent

The International Monetary Fund last month threw what looks like a much-improved financial lifeline to Ukraine—and indeed, the new loan program is welcome help for a desperate need. But a check on the math of one prominent IMF realist suggests that the cost of the overall aid package could be a Ukrainian economic shrinkage this year of an extremely painful 10 percent—much more than the IMF predicts publicly.

On March 11, the IMF approved a $17.5 billion support program for Ukraine, and within 48 hours delivered  the first $5 billion tranche. Ukraine’s desperate need for this cash infusion was illustrated by the dramatic reversal in a months’ long shrinkage of the national currency. The hryvnia rose to a value of 21.3 per US dollar, two weeks after having traded at nearly 34 UAH per USD.

The Ukrainian government should like many elements of the IMF loan package, called an “Extended Fund Facility.” (The EFF is a longer, more ambitious support program—it runs normally for at least three years—than the two-year “Stand-by Arrangement” that the IMF offered Ukraine a year ago.) While the IMF increased the amount of its help modestly, a more important change was its offer of more time to pay back the loan. That gives more breathing space to Ukraine’s depressed economy and weak fiscal stance. Second, the new program is front-loaded; it plans to send $10 billion in 2015. This concentration of aid is welcome because the Ukrainian government needs cash now rather than in the future. Third, the new program sets up a system of benchmarks for reforms which commits the Ukrainian government to implement necessary, but unpleasant policies. Given that the government’s progress in reforming the country has been rather timid in 2014, having its hands thus tied may prove essential for the success of the reforms. Finally, the IMF loan is likely to unlock more lending from other sources, creating a potential for Ukraine to receive as much as $40 billion over the next four years.

Still, the Ukrainian government should not be celebrating. Indeed, it should prepare for an extremely tough year. Indeed, the IMF projects that the Ukrainian economy will shrink by 6 percent in 2015, following the 8 percent contraction in 2014. A second year of economic shrinkage is hardly a good sign in political or economic terms.

In Figure 1, the solid blue line shows the IMF’s projection for Ukraine’s GDP in spring 2014, as the IMF approved its “stand-by” program for the country. The dashed red line shows the current projection. Source: IMF Country Report No. 15/69.

Furthermore, this 6 percent contraction may be too optimistic. In a 2013 paper now famous among economists, Olivier Blanchard—the chief economist of the IMF—and Daniel Leigh  documented that the IMF makes systematic errors in estimating the negative effects created when governments are forced to slash their deficits during economic crises. (Economists call this budget-cutting “fiscal consolidation.”)

Figure 2, below, shows how budget cuts projected by the IMF are related to surprises in economic growth relative to IMF forecasts.  On average, an additional percent of projected fiscal consolidation is associated with a growth forecast error of -0.7 percent. This is important for Ukraine because, as a part of the deal with the IMF, the Ukrainian government agreed to slash its budget deficit by 7.4 percent of the country’s gross domestic product (GDP). That’s a lot—similar to the drastic government budget cuts of recent years in Greece, Italy, Portugal and Spain.  The Blanchard-Leigh estimates suggest that the projected Ukrainian fiscal consolidation will accelerate the shrinkage of the country’s economy by an extra 4 percent of GDP. That, added to the already predicted 6 percent contraction, means Ukraine’s economy could shrink by as much as 10 percent this year.

Figure 2 plots errors in IMF forecasts (made in the spring of 2009) for real GDP growth in several countries. Source: Blanchard and Leigh (2013).

The IMF does not think this fiscal consolidation is a problem. Its staff estimates that “fiscal multipliers” for Ukraine are less than one. (That is, a dollar decrease in public spending leads to a less than dollar’s worth of contraction in the total economy).

Is this a reasonable estimate? The IMF also used to believe that fiscal multipliers were low for Greece, Italy, Spain, Portugal and many other countries. As a result, the IMF did not worry when it forced these countries to slash their budget deficits during the global financial crisis. The Blanchard-Leigh findings suggest that such beliefs were wrong. Indeed, the economic developments in these countries turned out to be rather disastrous. For example, over the course of the Great Recession and its aftermath, the Greek economy shrank by 25 percent. This was a downturn as deep as the U.S. Great Depression in the 1930s.

Of course, Ukraine’s future is rather uncertain and the calculations are obviously subject to many caveats. For example, one part of “fiscal consolidation” in Ukraine would be an ending of government subsidies to state-owned enterprises (which represent 1.1 percent of GDP). These subsidies—especially the very costly (and economically distortionary) support to state-owned coal mines—may have a low multiplier as they subsidies have been rather wasteful. However, only so much of the planned fiscal consolidation by Ukraine’s government can come in the form of such efficiency-improving measures. As a result, it is hard to see how one overturns a pessimistic outlook for 2015.

Economics may be a dismal science but it can offer a glimmer of hope for Ukraine. If the government wants to survive this year and put Ukraine on a track of robust economic growth, then it must focus on implementing what it promised to the IMF: fight corruption, deregulate the economy, give more independence to the central bank, etc.

Yuriy Gorodnichenko is Associate Professor of Economics at the University of California at Berkeley.