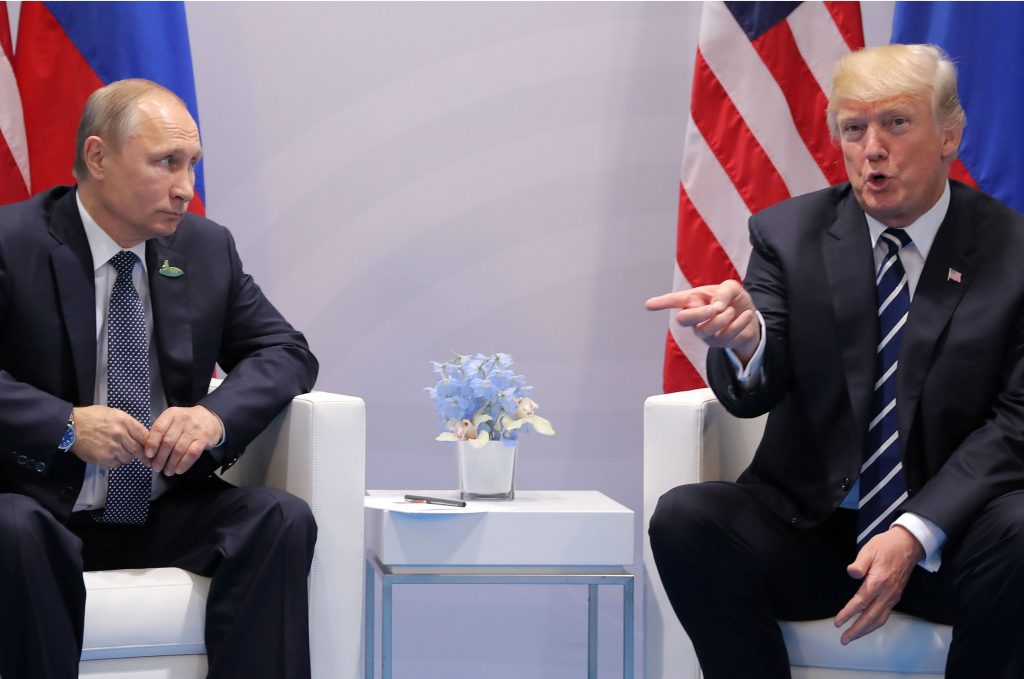 US President Donald Trump gestures as he meets with Russian President Vladimir Putin during the their bilateral meeting at the G20 summit in Hamburg, Germany July 7, 2017. REUTERS/Carlos Barria

On August 2, President Donald Trump signed the Russia sanctions bill that passed the House and Senate with veto-proof majorities. Trump had little choice; had he rejected the bill, it would have become law anyway.

Despite concerns that House Republicans would water down the bill after it initially sailed through the Senate on June 15, the final bill emerged with its teeth intact.

The bill is the most significant act by Congress on Russia policy in decades. Since the end of the Cold War, US policy toward Russia has vacillated between hopeful engagement and hardheaded skepticism. But the bill settles US policy decisively in favor of a revised form of containment, focused on holding the line against Moscow’s assault on liberal democracy and the post-Cold War settlement in Europe. So long as this law is on the books, a new “reset” that absolves Russia for its invasion of Ukraine and attack on the 2016 US election will be virtually impossible.

Congress deserves praise for defending US national security while the president stubbornly refuses to accept the Russian threat. But for the bill to fulfill its potential, the Trump administration must implement it smartly. The executive branch should take the following five steps to ensure the bill advances American interests and doesn’t needlessly alienate US allies.

1. Reassure the EU and G7 that the United States remains committed to multilateral sanctions and a transatlantic approach to Russia policy

A number of European leaders have criticized the bill as an act of unilateralism that could endanger European energy security. They worry about the bill’s potential impact on Nord Stream II, the controversial gas pipeline that would connect Russia to Germany through the Baltic Sea and jeopardize Ukraine’s transit revenues.

Notwithstanding that the pipeline provisions are discretionary—and that some in Europe are trying to use the bill to score political points—the White House must reassure US allies. When he signs the bill, Trump should issue a statement reaffirming America’s commitment to transatlantic unity and underscoring that the United States will not use the new sanctions to harm its allies. Secretary of State Rex Tillerson and Secretary of the Treasury Steven Mnuchin should also call their counterparts in the EU and the G7 to offer private reassurance.

As Russia is spreading disinformation in Europe in hopes of sowing divisions over the bill, it also behooves European leaders such as German Chancellor Angela Merkel and French President Emmanuel Macron to explain publicly that the bill is designed to deter Russia from future attacks on the transatlantic community. In calls with their counterparts, Tillerson and Mnuchin should ask if leaders are willing to make public statements in support of the bill.

2. Negotiate action plans with countries around the world to reduce their dependency on Russia’s defense sector

The strongest provision in the bill targets Russia’s intelligence and defense sectors. Practically speaking, it requires the executive branch to impose sanctions on anyone that engages in a significant transaction with Russia’s sprawling military-intelligence-industrial complex. But the most notable consequence is mandatory sanctions on entities that purchase significant volumes of Russian arms.

Russia is the world’s second-largest arms exporter. Dozens of countries buy Russian arms, but over the last decade, Russia’s biggest customers have been India, China, Algeria, Vietnam, and Venezuela. These five countries have purchased roughly 75 percent of Russia’s military exports.

Wisely, the bill permits sanctions to be delayed for 180 days if the president certifies that a violator is “substantially reducing” its transactions with Russia’s intelligence and defense sectors. This mechanism is similar to the one used by the United States to reduce Iran’s oil exports from 2.5 million barrels per day in 2012 to 1.1 million barrels per day the following year. As was the case with buyers of Iranian oil, countries can’t be expected to zero out their purchases of Russian arms overnight.

In the coming months, the Departments of State, Treasury, and Defense should send joint delegations to negotiate action plans with countries to wind down their purchases of Russian arms. Ideally, they should seek to secure deals that would allow the United States to delay imposing sanctions for at least a few years, while locking in major reductions in Russian arms sales.

The success of this provision should not judged by how many times the United States uses it to impose sanctions. On the contrary, the Trump administration should aim to impose these sanctions sparingly, if ever. The overarching goal should be to use the credible threat of sanctions to squeeze Russia’s intelligence and defense sectors and reduce global dependency on Russian arms.

3. Explain the new sanctions to the oil sector and warn firms that risk violating them

The bill includes two significant provisions that affect the oil sector. The first imposes mandatory secondary sanctions on any individual or entity that makes a significant investment in a “special Russian crude oil project”—defined as an Arctic offshore, deepwater, or shale oil venture. Domestic sanctions already bar US and European firms from making such investments. But this provision will affect oil companies based in countries that have not imposed domestic sanctions on Russia, including firms in Asia, the Middle East, and South America.

The US government regularly urges countries outside the sanctions coalition to prevent their companies from backfilling Russian business relinquished by American and European firms. The bill gives the US government a powerful tool to increase the likelihood that these requests are respected, as backfilling will carry the risk of triggering US sanctions.

The second oil-related provision in the bill prohibits US companies from participating in any Arctic offshore, deepwater, or shale oil project in which a Russian firm owns at least a 33 percent stake. Previously, US companies had been barred from participating in such projects only in Russian territory. Thus, the bill will impede Russian firms from copying advanced US drilling techniques used outside of Russia and then utilizing them to exploit next-generation oil resources at home.

As the recent Treasury Department fine against ExxonMobil illustrates, oil companies aren’t always circumspect when it comes to sanctions compliance. US officials must proactively explain the new restrictions to oil companies and indicate that the US government will enforce them strictly. US officials should also seek to negotiate wind-down plans with companies whose current investments in Russia could violate the new law.

The bill imposes mandatory sanctions on individuals and entities deemed to be “undermining cybersecurity against any person, including a democratic institution, or government on behalf of the government of the Russian Federation.” As the provision lacks geographic limits, it applies to Russian actors that use cyber-subversion against entities not only in the United States but also in Europe and beyond.

Europe has experienced no shortage of Russian cyberattacks in recent years, so the EU will likely be interested in exploring ways to deter Moscow in partnership with the United States. The US government should send a team to Europe to negotiate an EU equivalent of the cyber sanctions included in the bill. As part of these negotiations, the US delegation should also discuss how the United States and Europe could cooperatively implement sanctions in a way that maximizes their deterrent effect on Russia. A joint NATO-EU declaration affirming collective defense against Russian cyber-subversion is one mechanism that could enhance deterrence.

5. Articulate to Moscow what steps will be necessary for the United States to lift sanctions

To make the most of the bill, the Trump administration must not only implement it vigorously but also explain clearly what it aims to achieve. Sanctions can change behavior only if their target understands which behaviors must be changed.

Ambassador Kurt Volker, the US Special Representative for Ukraine Negotiations, should communicate unambiguously to Moscow that the United States stands ready to lift sectoral sanctions as soon as Russia fully implements its Minsk commitments and respects Ukraine’s sovereignty and territorial integrity. The bill fortifies sanctions, but it in no way prevents sanctions from being eased should Russia shift course in Ukraine.

Moreover, US officials must underscore that America will wield cyber sanctions aggressively if Russia persists in its meddling in elections around the globe. Yet Washington should also state that current cyber sanctions and penalties can be lifted if Russia refrains from interfering in any democratic processes over a prescribed time period—perhaps four years.

Without question, Congress has strengthened the Trump administration’s hand vis-à-vis Moscow by passing this bill with overwhelming support. The message is loud and clear: America will push back against Russian aggression regardless of political dysfunction in Washington. Even if the administration’s implementation is less than ideal, the law will preclude the type of catastrophic US-Russian deal that Trump has often flirted with. But anything short of proactive implementation would be a major missed opportunity to advance vital US interests.

Edward Fishman, a nonresident research fellow at the Atlantic Council, served as a member of the Secretary of State’s Policy Planning Staff and as the Russia and Europe Lead in the State Department’s Office of Sanctions Policy during the Obama administration. He tweets @edwardfishman. Editor’s note: Story updated on 8/2/17.