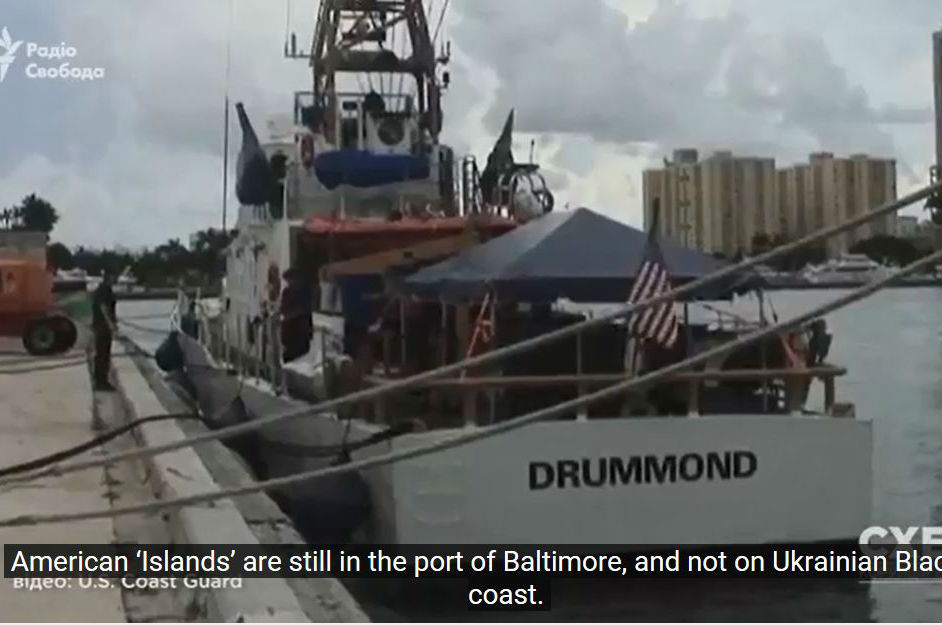 Editor’s note: On September 27, the United States officially transferred two former 110-foot Coast Guard cutters ships to Ukraine. However, the question remains: why did it take the Ukrainian government nearly four-and-a-half years to accept the US offer? We recommend the excellent RFE/RL “Schemes” investigation below.

Four years after Crimea’s annexation, Ukraine is still struggling to get its defense capabilities back on the sea.

On April 4, Ukrainian President Petro Poroshenko announced that Ukraine will receive two American ‘Island’ class boats, which previously were in the service of the US Coast Guard. This offer dates back to 2014.

According to Poroshenko, Ukraine’s Ministry of Defense is currently working on “internal procedures for the completion and approval of a draft contract.”  The president announced that a meeting between the parties will take place in May 2018 to finalize the details.

This statement follows the March 30 airing of a “Schemes” investigation, a joint project of RFE/RL’s Ukrainian Service and UA:Pershyi TV Channel.

Why is it taking so long for Ukraine’s leadership to finalize the deal?

Four years ago—in March 2014—Russia annexed Ukrainian Crimea, and therefore, most of the Ukrainian navy still remains in the hands of the Russian military.

This means, as military experts say, that the Black Sea is vulnerable and it is possible to cut off and isolate Odesa at any time. Thus, the arrival of the ‘Island’ boats could be the best way to renew the might of Ukraine’s fleet quickly and relatively cheaply.

Ukraine has decided to develop a new, so-called Mosquito Fleet—a combination of small but maneuverable warships. And the United States has expressed its readiness to help Ukraine by giving it the Island-class boats.

However, they still remain in the port of Baltimore, and not in Odesa.

We revealed that the official correspondence on the ‘Island’ boats between the relevant authorities in Ukraine and the United States has gone on for several years, resembling a game of bureaucratic ping pong.

One of the main obstacles is that the US side insists on a direct contract between Ukraine’s Ministry of Defense and the US Coast Guard. Ukrainian law gives this right only to the state giant Ukroboronprom. At the same time, Western partners and investors increasingly express unwillingness to work with such a middleman.

One of the explanations, diverting from the official line, is that the “gift” hasn’t yet reached Ukraine reportedly due to the commercial interests of Ukraine’s leadership. It’s no secret that Poroshenko is the owner of the only operating enterprise that builds the fleet.

As we have discovered from sources at Ukraine’s Ministry of Defense, money is already being allocated in the State Defense Order for the following years for boats produced by Poroshenko’s ‘Kuznya na Rybalskomu’ shipyard. Thus, it is entirely possible that the transfer of US ‘Islands’ could partially change the commercial plans of that shipyard.

We calculated whether domestic production of these boats would be more beneficial for the state. The ‘Islands’ were to be transferred to Ukraine free of charge within the framework of a US program that transfers excessive defense property, but according to its terms, the receiving party has to bear all of the associated costs like maintenance and crew training. As our investigation has revealed, such associated costs would reach about $10 million for the two US boats, while the domestic equivalent would cost nearly six times more—$27-35 million each.

“Searching for betrayal” or “major improvement”

Neither Poroshenko nor the prime minister or the defense minister were able to provide comments on the issue during the investigation. On April 4 the president said that the mass media has created confusion from “a clear situation.” Furthermore, he called journalists “betrayal backers” (zradofily in Ukrainian). Meanwhile, the Defense Ministry through Navy officials has claimed that such an investigation benefited the “aggressor state” and “twisted facts.”

In the meantime, the original TV story stated that both types of vessels are needed by Ukraine’s naval forces.

On April 18, in interview with RFE/RL’s Ukrainian Service, the United States Ambassador to Ukraine Marie Yovanovitch said that transfer of ‘Island’ boats “will not only double the number of ships that Ukraine has available, but majorly improve the capabilities of the Ukrainian Navy.” In her view, the sides “are moving forward in what we have considered to be the right direction.”

However, it is still unclear how the Ministry of Defense and the Cabinet of Ministers will receive the ‘Island’ boats. The issue is currently with Ukraine’s Ministry of Economic Development and Trade. The saga of American ‘Island’ class boats, destined for Ukraine, is perhaps far from finished.

Image: In 2014, the United States offered to give Ukraine two ‘Island’ class boats free of charge in an effort to rebuild Ukraine’s Navy. But the boats remain in Baltimore Harbor. A March 30 “Schemes” investigation examines the reasons behind the long delay. Credit: Courtesy screenshot RFE/RL's Ukrainian Service and UA:Pershyi TV Channel