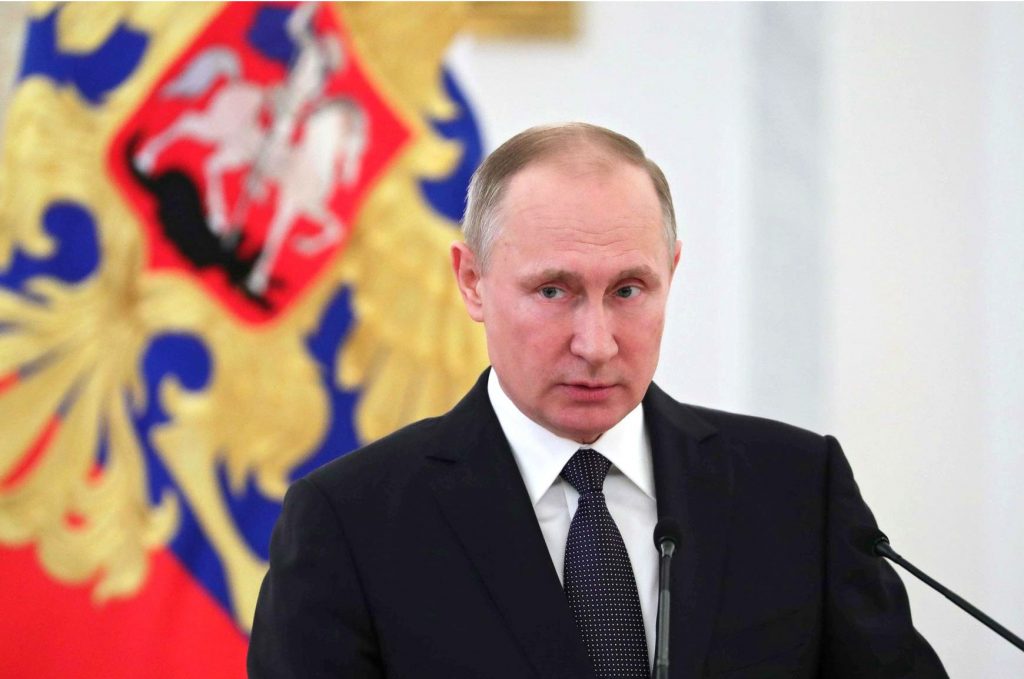 Today, the Senate overwhelmingly approved a bill that would fortify existing sanctions on Russia and add new restrictions. If the bill becomes law, it would mark the most significant step taken by Congress on Russia policy in recent history. Though not perfect, the bill would substantially strengthen the West’s negotiating position vis-à-vis Russia on the conflict in Ukraine and send a strong message to Moscow that efforts to undermine US elections carry costly consequences.

It is not yet a sure thing that the bill will become law. While the legislation has bipartisan support in the Senate, Secretary of State Rex Tillerson signaled on June 13 that the Trump administration might oppose it. The White House’s opposition could give House Republicans cold feet about voting on the bill.

But for now, it is worth examining the contents of the bill and explaining what it would mean for US policy toward Russia.

1. The bill locks in existing US sanctions against Russia and gives Congress a check on the president’s ability to lift sanctions.

The most basic element of the bill is that it codifies existing US sanctions against Russia—including three executive orders tied to Russia’s aggression in Ukraine, one tied explicitly to Russia’s annexation of Crimea, and two tied to malicious cyber activities. Absent such codification, President Donald Trump could terminate US sanctions against Russia with the stroke of a pen. By codifying the executive orders, the bill constrains the executive branch’s ability to remove any of the sanctions currently in place.

Moreover, the bill spells out what the president must do in order to remove sanctions: submit a report to Congress explaining the rationale, including what the United States expects to receive in return. Within thirty days of the submission of such a report (sixty if it is submitted during summer), Congress can approve or reject the president’s decision to remove sanctions.

By itself, this measure greatly strengthens US policy toward Russia. On Ukraine, it will give America’s sanctions partners (the European Union, Japan, Canada, and several others) confidence that Trump will not unilaterally back away from sanctions—which, in turn, will make it less likely that America’s partners will remove sanctions. Equally important, the provision will give Moscow clarity about America’s position: the United States will maintain sanctions until Russia changes the behavior that led to the imposition of sanctions in the first place.

2. The bill significantly expands US sanctions on Russia’s energy sector. If implemented proactively, it would cut off Russia’s hopes for developing its next-generation oil resources.

Current sanctions prohibit Western companies from providing goods or services to next-generation oil projects in Russia: specifically, Arctic offshore, deepwater, and shale projects. The bill expands US restrictions in two important ways. First, it brings projects in which Russian companies are involved—regardless of where they are located—under the purview of sanctions. That means Russian companies will be denied the opportunity to amass expertise in advanced drilling techniques by learning from Western partners.

Second, the bill requires the executive branch to impose sanctions on foreign firms that make significant investments in next-generation Russian oil projects. This provision—a classic case of secondary sanctions—will discourage companies around the world from investing in Arctic offshore, deepwater, and shale oil projects in Russia, diminishing the risk that lost US business will be backfilled by foreign competitors.

Taken together, the energy sanctions in the bill will likely block Russia’s development of next-generation oil resources, which can take many years to develop, for as long as the sanctions are in place. For Russia’s oil-dependent economy, this is a big deal.

3. The strongest sanctions in the bill concern transactions with Russia’s intelligence and defense sectors. These measures are the bill’s most important counterpunch against Russia’s interference in the 2016 US election.

As a response to Russia’s interference in the 2016 US election, the bill includes a number of sanctions that make sense thematically but will likely have minimal economic impact. But it does include one provision that packs a major economic punch: mandatory sanctions on any “person” (i.e., individual or entity) “that engages in a significant transaction with a person that is part of, or operates for or on behalf of, the defense or intelligence sectors of the Government of the Russian Federation.” If the Treasury Department implements this provision aggressively, it will amount to a threat of secondary sanctions against any company around the world that buys substantial arms from Russia (which, as of 2016, accounted for roughly 8 percent of arms sales globally).

With Russia investing heavily in arms while it increasingly uses its military to defy international norms, it behooves the US government to take steps to impede the development of Russia’s military capabilities. This provision, therefore, not only represents the muscle of the bill on cyber deterrence but also advances strategic objectives by hindering Russia’s military modernization and incentivizing foreign militaries to diversify away from Russian arms purchases.

4. The bill includes an optional tool that could help the US government impede Nord Stream II—and enhance European energy security—if the White House decides to use it.

While most sanctions in the Senate bill are mandatory, one important measure is discretionary: sanctions on investment in the construction of Russian energy export pipelines. If the Treasury Department opts to use this provision aggressively, it could threaten sanctions against any company that makes a significant investment in Nord Stream II, the controversial gas pipeline that would connect Russia to Germany by way of the Baltic Sea. And if Treasury were to levy such threats credibly, the parties involved in Nord Stream II may well decide it is too risky to proceed with the project.

This would be a big deal, as it would scupper Russia’s efforts to deliver gas to Europe while bypassing Ukraine, and it would help the EU diversify away from Russian energy. It could also be a boon for American companies seeking to export liquefied natural gas to Europe.

5. Other sanctions in the bill are mostly symbolic.

Under current sanctions, American financial institutions cannot provide credit to the six largest Russian banks with maturity of thirty days or more. The bill tightens the debt maturity threshold to fourteen days. While the symbolism is clear—sanctions are tightening and inching closer to blacklisting the Russian banks entirely—it is doubtful such a move will have significant practical impact. Other measures included in the bill, such as sanctions on the corrupt privatization of state-owned Russian assets, are difficult to judge in terms of projected impact.

6. This bill sounds great—what’s the catch?

There are several loopholes in the bill. One obvious loophole is in sanctions on investments in next-generation Russian oil projects. The text of the bill allows the White House to opt not to impose the sanctions if “the president determines that it is not in the national interest of the United States to do so.” While waiver authority is necessary, the provision would be improved if it required a report to Congress each time the president decides not to penalize a worthy target. Thankfully, the strongest provision in the bill—which restricts transactions with Russia’s intelligence and defense sectors—includes a waiver that mandates Congressional notification.

Other quibbles with the bill are minor. The bill requires several reports from the executive branch, including a study on the potential impact of a ban on dealing in Russian sovereign debt. Reports, unfortunately, can suck up precious staff time that is better spent enforcing sanctions proactively. The bill would be much stronger—and more effective—if it simply imposed restrictions on dealing in Russian sovereign debt.

Nevertheless, senators on both sides of the aisle deserve much credit for designing legislation that will clearly advance US interests.

7. Keep your eyes on the EU’s reaction.

Had Congress passed such a bill during the Obama administration, the EU would have opposed it vocally. That’s because the bill alters certain sanctions that were initially negotiated multilaterally, without giving the EU or others a chance to weigh in. Moreover, because of the reach of the US financial system, European firms will likely comply with the new American sanctions whether or not their governments approve. And of course, the bill includes a number of secondary sanctions—which no foreign government likes.

In ordinary times, France could be expected to oppose the bill as a unilateral use of American power. But having been victimized by brazen Russian cyberattacks during his own campaign, President Emmanuel Macron may be tempted to support it—or at least to remain quiet. The same is true for German Chancellor Angela Merkel, who may view the legislation as an opportunity to reestablish a degree of transatlantic unity on Russia policy.

Regardless, Secretary Tillerson and Secretary of the Treasury Steven Mnuchin would be wise to send envoys to Europe to try to persuade US allies to sign on to similar sanctions. The West’s leverage in negotiations with the Kremlin is strongest when America and the EU project a united front.

8. What does the bill mean for broader US policy toward Russia?

One interesting hypothetical is what will happen if the bill becomes law but the Trump administration is apathetic about enforcing it. Such a move would muddle US policy toward Russia. After all, sanctions are only as useful as the policies they are meant to advance. But the executive branch will be required by law to implement most provisions in the bill, and the Treasury Department will take its legal obligations seriously.

Even if Trump persists in his pro-Russia rhetoric, the bill will provide much-needed clarity to US policy toward Russia. It will end worried speculation about the White House’s intentions on sanctions, and it will indicate once and for all that America remains committed to combating Russian aggression. That the US Senate was able to pass such a significant piece of legislation during a time of intense partisan division is no small achievement.

Edward Fishman, a fellow at the Atlantic Council, served as a member of the Secretary of State’s Policy Planning Staff and as the Russia and Europe Lead in the State Department’s Office of Sanctions Policy during the Obama administration. He tweets @edwardfishman.