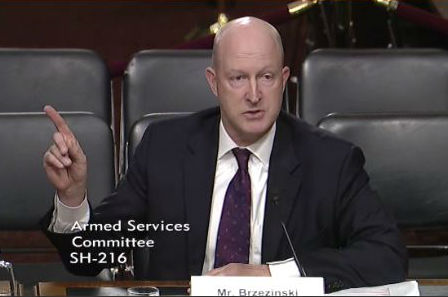 Ian Brzezinski: Our policy “conveys hesitancy and a lack of unity and determination. It has failed to convince Putin to reverse course. Indeed, it may have actually emboldened him.”

The West’s current strategy toward Russian President Vladimir Putin’s aggression in Ukraine not only promises continued conflict in Ukraine but also poses an increased danger of wider war, the Atlantic Council’s Ian Brzezinski told the US Senate this week.

If the West holds to its current course, Ukraine is likely in the next six to eighteen months to lose more territory and see an even weaker economy, while Russia’s economy will likely be only somewhat weaker and its leaders marginally more isolated, Brzezinski, a Resident Senior Fellow in the Atlantic Council’s Brent Scowcroft Center on International Security, said April 28 in testimony to the Senate Committee on Armed Services.

Brzezinski expects Putin to be more irrationally nationalistic and more brazen. “Under such a scenario, not only are Ukraine’s prospects more dire, the prospects of collision, albeit inadvertent, between Russian and Western forces are increased. The very risk of conflict escalation that current policy has been designed to avert will actually be more likely,” he said.

Russia’s invasion of Ukraine is “a direct threat to the credibility of NATO and vision of a Europe whole, free, and secure. It is but one element of a revanchist policy intended to reestablish Russian hegemony over the former Soviet Union,” Brzezinski said.

“It is a campaign that pursues twentieth century objectives, leveraging twenty-first century techniques and old-fashioned brute force,” said Brzezinski, who served as Deputy Assistant Secretary of Defense for Europe and NATO Policy from 2001 to 2005. Moscow’s campaign rests on a $750 billion defense modernization program that is upgrading Russian conventional and nuclear forces.

Russia’s strategy involves provocative military actions beyond Ukraine intended to intimidate, divide, and test the capabilities of the NATO alliance. These actions include greater assertive naval and air patrols; violations of allied and partner sea, air, and ground space; harassment of military and civilian aircraft and ships; and a steady stream of nuclear threats from Russian officials, including Putin himself.

Russian military exercises have been an important part of these shows of force. They are notable for their magnitude and the frequency of “spot” exercises—the sudden and unannounced deployment of forces. In the last three years, Russia has conducted six major military exercises involving between 65,000 and 160,000 personnel. These dwarf the size of NATO exercises and raise questions about the alliance’s ability to mobilize comparable forces.

The West has responded with limited incremental escalations of economic sanctions and military deployments, which “conveys hesitancy and a lack of unity and determination. It has failed to convince Putin to reverse course. Indeed, it may have actually emboldened him,” Brzezinski said. Thus, “continued incrementalism not only promises continued conflict in Ukraine but also an increased danger of a wider war.”

Erasing the Red Line that Putin Has Redrawn in Europe

More action is needed to “help erase the red line that the West has inadvertently allowed Russia to redraw in Europe,” Brzezinski said.

The West should aim to impose higher economic costs on Moscow, deter Russia from further provocative conduct, and reinforce the security of Central Europe.

According to Brzezinski, five discrete actions are needed:

First, the West should impose sectoral sanctions to more aggressively shock the Russian economy by shutting off its energy and financial sectors from the global economy.

Second, the alliance should reinforce NATO’s eastern frontier. It should station a brigade-level combat capability in Poland and Romania, station battalion-level capacities in the Baltic states, and provide NATO’s top military commander with the authority to deploy forces in response to provocative Russian military actions.

Third, Kyiv’s capability for self-defense must be reinforced. The United States should arm Ukraine with air-defense, anti-tank weapons, and other capabilities; deploy intelligence and surveillance capabilities; and conduct military exercises in Ukraine.

Fourth, security assistance should also be offered to Moldova and Georgia, which are threatened by Putin’s assertive policies.

Finally, the West needs to reanimate the vision of Europe whole and free—a vision that kept the peace in Europe since World War II.

“If allowed to succeed, Putin’s invasion of Ukraine will create a new confrontational divide in Europe, between a community defined by self-determination, democracy, and rule of law and one burdened by authoritarianism, hegemony, and occupation,” he added.