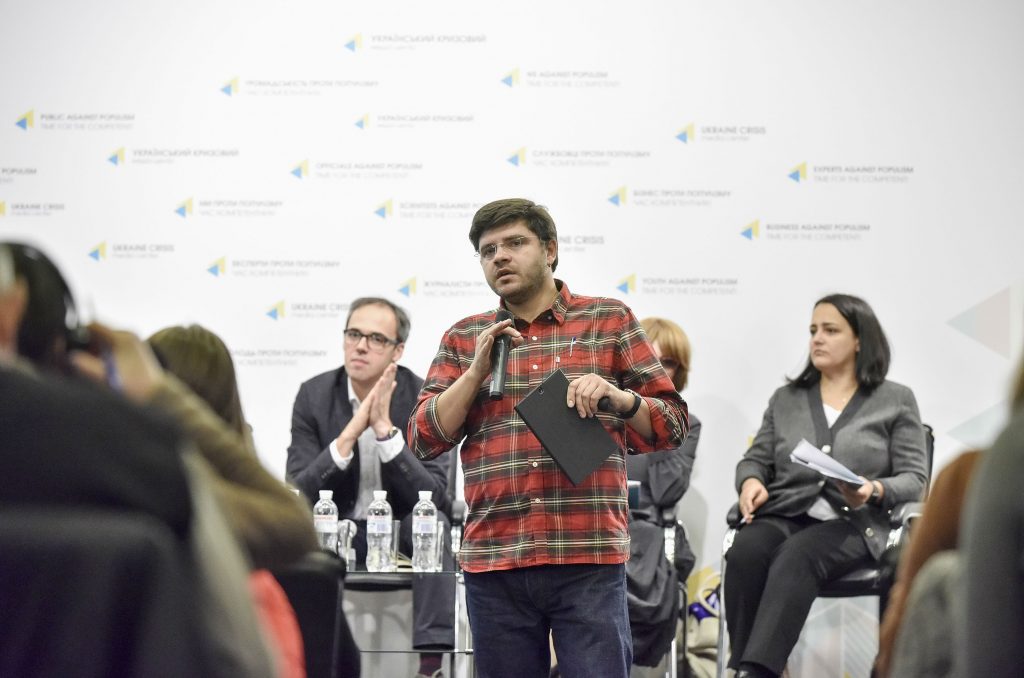 Exactly five years ago, the country’s most important independent crisis communications center was set up in Kyiv in less than forty-eight hours. It started with a text message and a series of phone calls.

Shortly after the protesters in the Maidan won and former Ukrainian president Victor Yanukovych fled on February 22, 2014, Russia’s “little green men” began to appear in Crimea. Kyiv was flooded with international journalists and diplomats in need of information. The situation was changing rapidly, and Ukraine’s future was anything but certain.

Nataliya Popovych, the soft-spoken head of a public relations firm, was among the Maidan activists watching Russian television and worried that Ukraine was outmatched.

Russian propaganda “was questioning the ideals of the revolution which we ourselves witnessed,” Popovych said. “We passionately wanted the world to know the truth and objectively cover the unfolding events in Ukraine which were very different from the Russki Mir [Russian world] narrative which Russia disseminated.”

On March 2, Pavlo Sheremeta, the newly appointed minister of economy, texted Popovych and asked for help. At the same time, Ivanna Klympush-Tsintsadze reached out, mobilizing people at the Ministry of Foreign Affairs. Popovych began pulling in more colleagues from the communications world. Later that night, a small group met in Minister of Foreign Affairs Andriy Deshchytsia’s office and decided to create a single communications hub. One meeting later with Valeriy Chaly, Gennadiy Kurochka, and a few others, the Ukraine Crisis Media Center was born.

It’s a story one hears often in Ukraine. The Maidan brought people together who hadn’t really worked together previously. Communications professionals Popovych and Kurochka, along with Klympush-Tsintsadze who was then with the Yalta European Summit, and Chaly of the Razumkov Center at the time, acted quickly.

In forty-eight hours, they created a press center with basic equipment, people to run it, barebones processes, and a logo. The center has been operating seven days per week, twenty-four hours a day since then.

“We did not have time to study any textbooks but applied all the knowledge and experience of our previous lives in business, international relations, or analysis to address the challenges as they came,” Popovych said.

The hardest part of forming the center was figuring out the different duties (it was a volunteer effort at the beginning), and the name, Popovych says with a laugh.

Once the co-founders had agreed, the center opened on March 5, 2014, in the historic Hotel Ukraine on the Maidan. Only days before, some of those shot by snipers during the bloodiest days of the street revolution had died in the lobby. The windows still had bullet holes.

The idea was simple: the Ukraine Crisis Media Center would provide a free physical space, independent of the government, in a central location, with simultaneous translation into English. It invited Ukraine’s government officials, foreign diplomats, activists, and everyone working to rebuild the country to speak and attend its briefings.

“Everyone who wants to have a say can be heard,” Popovych said.

A committed physical space in which a nation can discuss political and polarizing issues won’t strike Western readers as anything special. But in Ukraine, it’s a novel concept. Physical space is hard to come by, and if ideas are aired that don’t conform to the owner of a space’s ideas, it’s usually game over, Yevhen Hlibovytsky, a civil society expert and partner at the Pro.Mova consulting firm likes to point out.

Its first test came in July. Russia shot down Malaysia Airlines Flight 17 over Ukraine, killed hundreds, and then lied about it. Over and over again. In addition to RT and Sputnik, Russia had extensive access to foreign media plus its own domestic channels to peddle its lies. Into the gap jumped the new crisis center. It operated as the official MH 17 crisis communications hub for the Ukrainian government, and it ably handled hundreds of foreign media requests and coordinated with the official investigation commission, the Organization for Security and Cooperation in Europe, and dozens of embassies.

“The UCMC was an invaluable partner…During the time of the MH 17 disaster, the center allowed us to provide live and frequent updates to local and foreign journalists based in Kyiv,” said Michael Bociurkiw, the former spokesperson to the OSCE Special Monitoring Mission in Ukraine.

“Professional, hard working, passionate, friendly—these are the traits which best describe its staff and volunteers over the years. Truthfully, one of the highlights of my week was coming to the center to deliver my weekly SMM briefings. The UCMC boosted Ukraine’s image at a time when it needed it most. It was and remains the channel for the passionate voices of a reborn, Euro-integrated Ukraine,” he said.

To date, the center has held more than 6,000 events, issued more than 13,500 press releases, provided a platform for 14,400 speakers, and worked with 14,200 journalists. At the beginning, it operated in five foreign languages and still operates in English and French. UCMC estimates that it reaches 10 million Ukrainians and 1 million foreigners each month.

UCMC has since moved to Ukraine House, which held the library during the Maidan protests and provided shelter to protestors. Located in downtown Kyiv, a five-minute walk from parliament and the presidential administration, the press center is spare: white walls, black chairs, a raised platform, and plenty of space for television cameras. The worn grey carpet is fraying from use and has been changed more than once. This is a well-used space.

The center’s mission has expanded beyond fighting Russian propaganda. Last year, UCMC built its first political online game to educate young Ukrainians about media literacy and promote critical thinking that 120,000 people have tried. It set up a hybrid warfare analytical group that informs Ukraine’s international partners about the techniques Russia often tests in Ukraine and advises on countermeasures. Numerous civil society organizations and think tanks hold events or briefings in the press center as well, often challenging the government on the reform process. At the same time, major reforms, like anti-corruption, health care, decentralization, are explained in person and online. In 2018, the Ministry of Health held twenty-five events at the UCMC to spell out changes to the health care system.

While it started as a “crisis” center, the center is still relevant and needed even during less turbulent times. It’s filling a gap between the public broadcaster, which “isn’t acting to its full capacity” and a strategic communications advisor for the country Popovych said. Its materials and briefings explain reforms in a humane, practical way. It recently hosted a popular discussion on changes to the law on private entrepreneurs, for example.

Regardless of who wins Ukraine’s presidential election, two things are certain: the Ukrainian Crisis Media Center will continue to provide a platform for discussion—and it will need to change its carpets again and again.

Melinda Haring is the editor of the UkraineAlert blog and a senior fellow at the Foreign Policy Research Institute. She tweets @melindaharing.