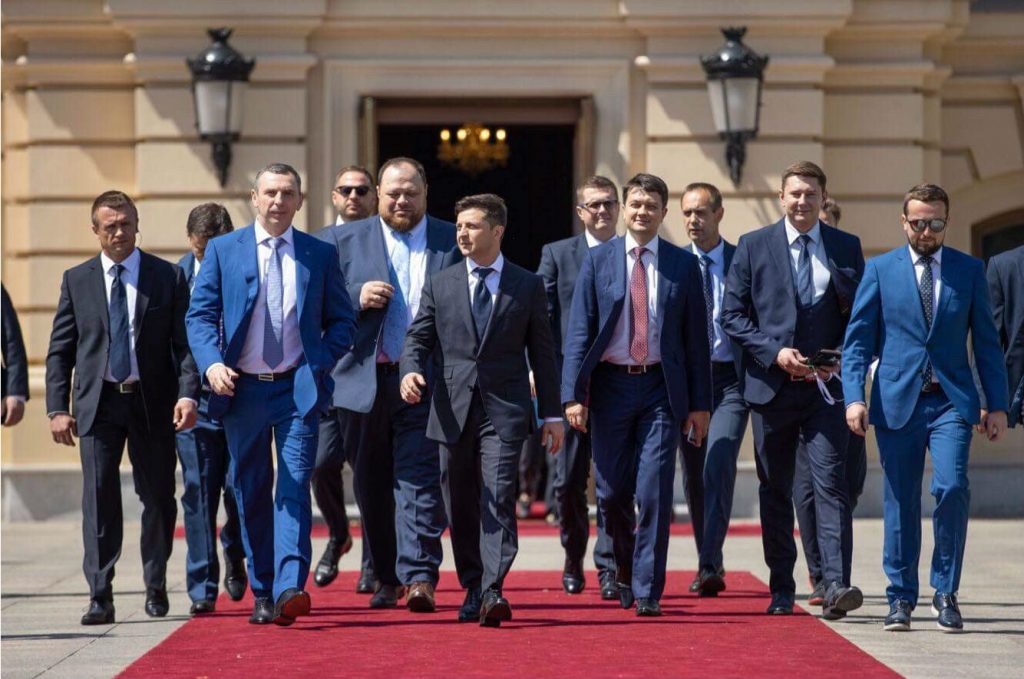 President Volodymyr Zelenskyy on May 20 in Kyiv, Ukraine, surrounded by his advisers. Credit: Володимир Зеленський Twitter

There are three changes that Ukrainian President Volodymyr Zelenskyy and his parliamentary majority can quickly make in order to magnify the effect of the recent sweeping change in parliament’s roster.

First, new MPs need to be paid well to discourage corruption. Currently, Ukrainian parliamentarians earn about 28,000 hryvnias per month, or approximately $1,000. In addition, they receive a number of privileges. Within Ukraine’s socioeconomic context, this package of remuneration makes Ukraine’s MPs relatively well-off.

However, Ukraine’s capital Kyiv, where MPs are supposed to live most of the time, is more expensive than the rest of the country. The current MP reimbursements may be enough for single MPs with no family obligations. But the current pay makes it difficult for those who are also supporting children, spouses, parents, or other relatives to take up a seat in parliament while relying only on their official income as parliamentarians.

Even for those without greater family obligations, the current renumeration system is dysfunctional. In the best case, it limits an MP’s lifestyle to one of constant counting of expenses for food, transportation, and clothing. In the worst case, it creates a situation in which MPs feel ethically justified to take side-payments so as to afford services that their peers in business and international affairs use on a regular basis.

To overcome this situation, Ukraine could—with reference to its Association Agreement with the EU—adopt the EU’s formula for salaries paid to the members of the European Parliament. MEPs receive about a third of the amount that the highest judges in the EU’s courts are paid. For some time now, Ukraine’s top judges have received, by Ukrainian standards, extraordinarily high salaries. If Ukrainian MPs received about a third of that—applying the EU formula, in short—this would significantly increase their monthly remuneration, and make their interactions with businesspeople, diplomats and Western peers much more relaxed. Such a deal would also provide a justification for withdrawing immunity from MPs and increasing the penalties for bribe-taking and other misbehavior.

Second, there have been statements by the new president and his team about the possibility of early local elections. A deep change in Ukrainian public administration at the national level also requires a swift exchange of local elites. Many current deputies and administrators at the regional and sub-regional levels are corrupt. Yet for elections to be effective as a means to secure change at the regional and municipal levels, some improvement of the rule of law is necessary. New committed teams in the prosecutor’s central and branch offices, and in the various anti-corruption bodies need to be appointed.

Furthermore, the role, function, and reimbursement of oblast, rayon, and communal administrators and deputies need to be adjusted. The official salaries of mayors, for instance, are very low, while members of city councils work pro bono. As on the national level, such conditions naturally lead to corruption—despite the good intentions citizens may have when becoming public servants. New elections by themselves will not change this.

Third, many Ukrainian government bodies suffer—especially in the top positions—from egregious gender imbalances. This is not only fundamentally unjust since more than half of the country are women. Organizational research has also found that collective bodies, whether private or public, function better when at least one-third of its members are female.

To be sure, the composition of the Rada has changed for the better as a result of the last elections. Yet the share of women among parliamentarians only increased from 12 percent in the last parliament to 19 percent in the new one. Worse, all of the parliamentary parties except one are led by men, as are most other government institutions.

Given these circumstances, the number of women in top positions needs to be sharply increased. It may make sense to purposefully reduce, for a while, appointing men to top offices, in order to ensure that women are better represented. Given the high number of well-educated, emancipated, and career-oriented women in Ukraine, this should not be a problem.

Now that Ukraine’s elections have passed, few would disagree that numerous new laws, resolutions, and policies need to be implemented to make the state function better. But the bodies responsible for formulating, making, and executing decisions in all three branches of power as well as in regional and local administrations are still hampered by deep structural defects. Until these basics are corrected, the efforts of Ukraine’s state organs will continue to fall short.

Andreas Umland is a nonresident fellow at the Institute of International Relations in Prague, principal researcher at the Institute for Euro-Atlantic Cooperation in Kyiv, adjunct lecturer at the University of Jena, and general editor of the ibidem Press book series Soviet and Post-Soviet Politics and Society and Ukrainian Voices.