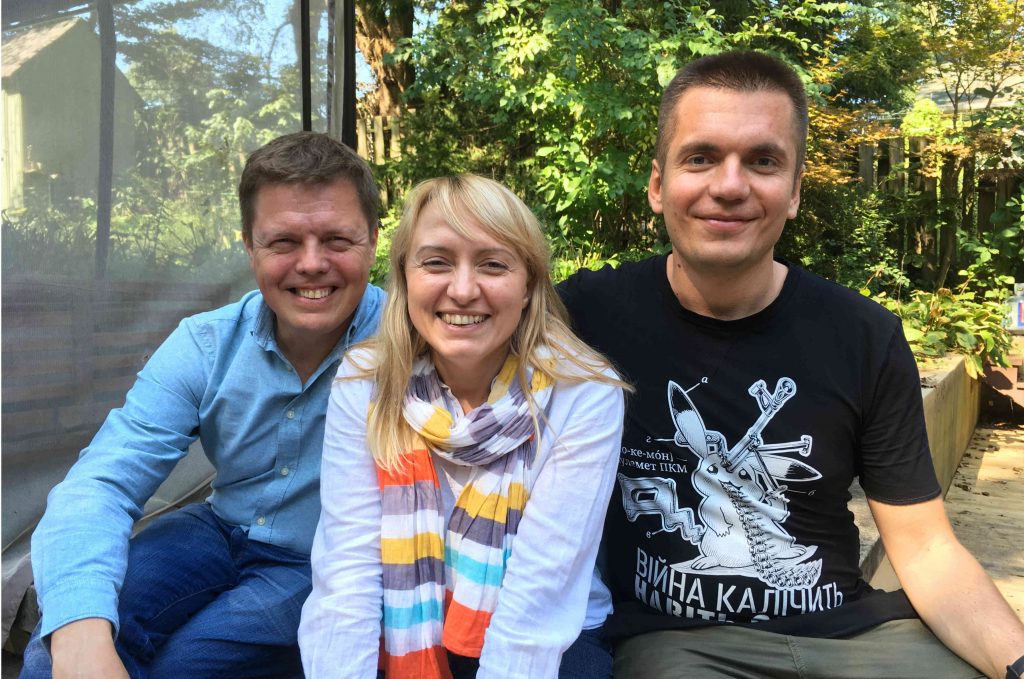 Ukraine’s civil society is realizing an unfortunate fact: reforming the country is going to be more of a marathon than a sprint. Consequently, pro-reform advocates have had to adjust their expectations.

Describing her hopes for the speed of change in Ukraine, Anticorruption Action Center executive director Daria Kaleniuk said that she and her colleagues now see the project of fixing Ukraine as a generational one. And after nearly five years of intense hand-to-hand combat, civil society is exhausted.

Fortunately, some of the country’s top activists and leaders are taking much-needed breaks, logging off their devices and cracking books. Increasing numbers of US organizations are providing fellowships to help Ukraine’s leaders regroup and renew their energies.

One is the Center for European Policy Analysis, a small think tank in Washington, DC, that houses the James Denton Transatlantic Fellowship. In late September, CEPA brought three leaders to Washington for a three-week fellowship. The Ukraine fellows include an IT guy who unexpectedly became a national fundraiser for Ukraine’s army, a top lawyer and city councilman, and a brilliant strategist who is helping civil society mature.

Vitaliy Deynega, a thirty-five-year-old IT specialist, has raised more than $6 million in four years for the Ukrainian military which was ill-equipped. One out of every two thermal-vision devices used by the Ukrainian military comes from his organization, Come Back Alive (Повернись живим). His organization has supplied navigation devices to half of Ukraine’s military aviation assault jets. In addition, the charity has hired instructors who teach tank operators how to best return fire without hitting civilians and apartments. In the past, volunteers were using calculators to do it; now, thanks to Deynega’s organization, they have a satellite connection which handles the calculations automatically.

When Russia invaded Ukraine in 2014, Deynega began donating to Ukraine’s military and collecting money from friends. It turns out that he’s a natural fundraiser and people trust him. The graduate of Kyiv Polytechnic Institute used Facebook advertising to generate interest, started a charity, and now employs twelve people. He has good relations with the Ministry of Defense and plans to develop a military think tank next.

Another Denton fellow is Andrii Osadchuk, a city councilman who is a member of the Kyiv Team, a new group within the Kyiv city council that recently split with the Lviv-based political party Samopomich. His team of seventeen is composed mainly of experienced businessmen, lawyers, and activists, and it is gaining greater recognition after having passed a number of anti-corruption measures in the city council.

He’s fed up with the old ways of doing things; he knows that Ukraine can do far better and he even put a corporate career on hold to nudge the country in the right direction.

The forty-six-year-old lawyer radiates kindness and says he wants to follow in his father Petro Osadchuk’s footsteps. His father was a parliamentarian as Ukraine achieved independence in the early 90s. But Osadchuk is quick to say that he doesn’t want to be an MP for the sake of being an MP.

Above all, Osadchuk is pragmatic. Osadchuk wants to make Kyiv attractive to foreign business, and he has clear ideas how to do it. He wants to close 80 percent of the 300-400 municipal-owned enterprises that the city still owns. Some of the most outrageous Soviet holdovers include Besarabsky Market, dental clinics, and even tourist companies.

“It’s a good example why we have challenges for foreign investors,” Osadchuk notes wryly.

While the city’s annual budget is large, approximately $1.8 billion, the city council only controls one-third of that figure. The other two-thirds pays teachers’ and doctors’ salaries and social security.

The city of Kyiv, while lovely and the host of multiple international sporting and cultural activities, including Eurovision, lags behind on most city rankings. The city also lacks a master plan, Osadchuk points out, and developers build just about wherever they like.

Osadchuk wants to lure small and medium sized businesses to under-utilized parts of the city, including its left bank, through rent reduction. State offices and the Kyiv City State Administration offices should also be moved, he said.

The lawyer also wants systemic change. Not enough power has been devolved even after the street revolution nearly five years ago, Osadchuk said. The Kyiv city council doesn’t have enough control over municipal affairs. In 2010, disgraced President Viktor Yanukovych gave himself more power: while the mayor of Kyiv is elected, the president appoints the head of the Kyiv City State Administration, which is where power in the city actually resides. This leads to dependency on the president.

The third fellow, Alexandra Baklanova, is quietly helping Ukraine’s civil society professionalize. She’s the director of the strategic consultancy pro.mova, which has worked with one hundred mostly nonprofit clients, including some of Ukraine’s best known, like the Ukrainian Catholic University, Center.UA, and the civil network OPORA, since 2014.

“We help clients with the most difficult questions. When the solution isn’t obvious, they come to us,” the soft-spoken blond woman told me.

Originally from Sevastopol, she grew up as an army brat in Leipzig and Luhansk, where she “learned how to fend for herself,” she said with a laugh.

In many ways, she has an enviable job. “We sell our services only to those we would be happy to assist for free,” she said. She handpicks her clients, all of whom are trying to advance the values and vision of the Euromaidan revolution in some way.

She also teaches strategy at the Ukrainian Catholic University in Lviv, and is part of the Nestor Group, an informal think tank.

As Osadchuk, Deynega, and Baklanova return to Kyiv with renewed focus, it takes little imagination to see all three in a reform-minded government—whether that government comes to power next year, or a generation from now.