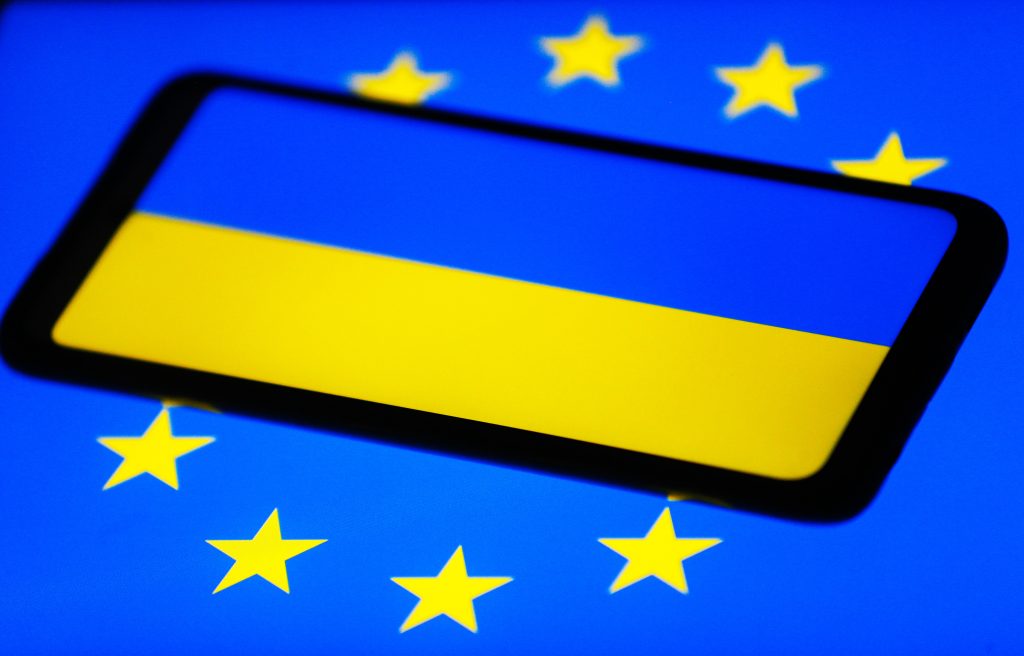 During Ukraine’s iconic early twenty-first century Orange Revolution, a large banner erected at the tent city in downtown Kyiv proclaimed proudly: “We are carrying out a Euro-renovation of our state. We apologize for any inconvenience.”

Ukraine’s European ambitions were not initially the principal driving force behind the Orange Revolution. Instead, the 2004 people power uprising came about in direct response to the very specific circumstances of a rigged Ukrainian presidential election. Nevertheless, the aspirational and somewhat romanticized notions of Europe encapsulated in that tent city banner provide crucial context for anyone wishing to understand Ukraine’s dramatic geopolitical journey over the past three decades.

In the years following the collapse of the Soviet Union, Europe served as the idealized “other” for newly independent Ukrainians and was frequently invoked to underline the imperfect realities of post-Soviet Ukraine. In an environment of economic hardship and growing inequality, the prefix “Euro” soon became synonymous with unattainable quality of all kinds. Expensive restaurants offered “Euro-cuisine,” elite real estate came with “Euro-renovation,” and virtually anything deemed superior was referred to as “Euro-standard.” It was hardly surprising, therefore, that participants in the Orange Revolution should see their attempt to establish democratic government as another example of moving toward preferable European norms.

This understanding of Europe as a source of democratic rights and the rule of law has remained central to the evolving public debate over Ukraine’s future direction ever since. While the European Union is regarded by many member states as a primarily economic bloc, Ukrainians have consistently viewed future EU membership in far grander terms as a symbol of their country’s civilizational choice.

This helps to explain the celebratory mood in war-torn Ukraine on June 23 when European leaders granted the country official EU candidate nation status. While many noted the catastrophic price Ukraine has paid for this relatively modest step forward in the country’s EU integration, others saw candidate status as a long overdue breakthrough and a significant victory for Ukraine in its struggle against Russian aggression.

Ukraine’s European choice is not intrinsically anti-Russian, of course. Indeed, even as support for European integration consolidated in the years following the 2014 outbreak of hostilities between the two countries, large numbers of Ukrainians continued to express positive attitudes towards Russians. This tolerant approach survived until the full-scale Russian invasion of Ukraine in February 2022.

In contrast, Moscow has always viewed Ukraine’s EU ambitions as an existential threat to Russia. While Kremlin officials typically prefer to focus their public attacks on the red meat issue of NATO enlargement, the origins of today’s war can be traced directly back to Russian anger over the prospect of a relatively innocuous Association Agreement between the European Union and Ukraine.

The Kremlin’s heavy-handed intervention in October 2013 initially succeeded in derailing the planned signing of the Association Agreement. However, Moscow’s actions also sparked massive protests in Ukraine which soon spiraled into the Euromaidan Revolution and the fall of Ukraine’s pro-Kremlin government. Russia responded to this setback by invading Crimea and eastern Ukraine. This in turn set the stage for the outbreak of Europe’s largest conflict since WWII in February 2022.

Russian concerns over the emergence of a European Ukraine are rooted in the Putin regime’s obsession with the collapse of the USSR. The eclipse of Soviet power remains the formative political experience for Putin personally and many members of his inner circle, who fear that Ukraine’s transformation could serve as a catalyst for the next chapter in Russia’s long imperial decline. Haunted by the people power uprisings that swept Central Europe in the late 1980s, they are now apparently prepared to pay almost any price in order to prevent Ukraine from serving as inspiration for similar democratic change within Russia itself. This hardline approach is perhaps not as surprising as it might at first appear. After all, at stake is the survival of Putin’s authoritarian regime and possibly Russia itself.

Russia’s implacable opposition to Ukraine’s European integration lies at the heart of the current war and is the greatest single security threat in the world today. Having failed to bribe or bully Ukrainians into abandoning their European ambitions, Putin has resorted to waging a war of annihilation that seeks to eradicate Ukrainian identity and destroy the Ukrainian state itself.

Europe has responded by offering Ukraine EU candidate status, but it is not yet clear whether this welcome symbolism will be accompanied by sufficient substance. Over the coming months, the progress of Ukraine’s candidacy will go a long way to determining not only the ultimate outcome of the current conflict but also the future trajectory of the European Union as a whole. An organization founded to prevent war and unite Europe cannot hope to flourish if it fails to support a potential future member state that finds itself under genocidal attack for the crime of embracing core European values.

The full-scale Russian invasion of Ukraine is now in its fifth month but the conflict is actually far older. Ukrainians have spent the past eight years fighting for the right to a European future and face the prospect of further painful sacrifices. Russia’s violent intervention has transformed what should have been a largely bureaucratic process of economic and political reform into a bloody battle for national survival.

There was nothing inevitable about any of this. The only reason Moscow finds itself so completely opposed to Ukraine’s European ambitions is because modern Russia has chosen the path of dictatorship over democracy. This simple fact must shape the West’s response to the ongoing conflict and serve to guarantee maximum EU support for Ukraine’s further integration. Granting Ukraine candidate status is a step in the right direction, but as long as the country is stuck in the geopolitical grey zone, it will remain a target for Russian aggression and a source of international instability.

Image: National flag of Ukraine seen on a smartphone screen in front of the EU (European Union) flag in the background. (Photo by Pavlo Gonchar / SOPA Images/Sipa USA)