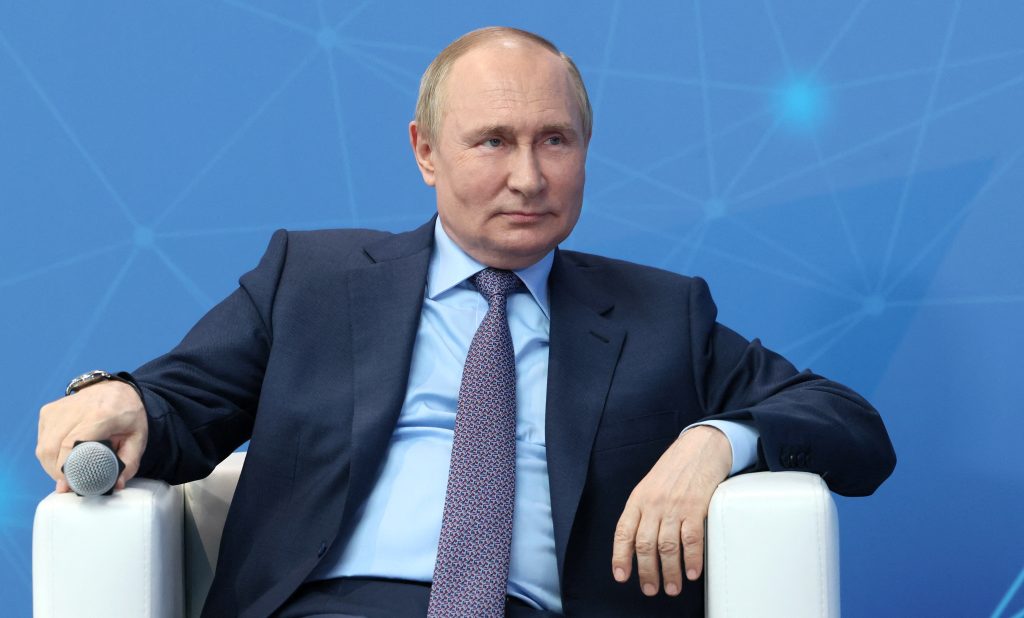 Throughout the past few months, Vladimir Putin has offered up all manner of outlandish excuses for his invasion of Ukraine. At various different times he has blamed the war on everything from NATO expansion to imaginary Nazis, while also making completely unsubstantiated claims about Western plots to invade Russia and Ukrainian schemes to acquire nuclear weapons.

The reality, it now transpires, is considerably less elaborate and infinitely more chilling. Putin has launched the largest European conflict since WWII for the simple reason that he wants to conquer Ukraine. Inspired by the czars of old, Putin aims to crush his neighbor and incorporate it into a new Russian Empire.

Putin elaborated on his imperial vision during a June 9 event in Moscow to mark the 350th birthday of Russian Czar Peter the Great. He spoke admiringly of Czar Peter’s achievements during the Great Northern War and drew direct parallels to his own contemporary expansionist policies. The lands taken from Sweden during the Great Northern War were historically Russian and Peter was merely returning them to their rightful owners, Putin stated. “Apparently, it is now also our responsibility to return (Russian) land,” he said in a clear reference to the ongoing invasion of Ukraine.

Putin’s latest comments underline his imperial objectives in Ukraine and expand on years of similar statements lamenting the fall of the Russian Empire. For more than a decade, he has questioned the historical legitimacy of Ukrainian statehood and publicly insisted that Ukrainians are really Russians (“one people”). Putin has also repeatedly accused Ukraine of occupying ancestral Russian lands and has blamed the early Bolsheviks for bungling the border between the Russian and Ukrainian Soviet republics.

His unapologetically imperialistic attitude toward Russian-Ukrainian relations was laid bare in July 2021 in the form of a 7,000-word essay authored by Putin himself which set out to explain the alleged “historical unity” binding the two nations together. “I am confident that true sovereignty of Ukraine is possible only in partnership with Russia. For we are one people,” Putin the amateur historian concluded. This bizarre treatise was widely interpreted as a declaration of war against the entire notion of an independent Ukraine and has since been made required reading for all Russian military personnel.

The Russian dictator’s obsession with Ukraine reflects his burning resentment over the collapse of the USSR and his lingering bitterness at post-Soviet Russia’s dramatic loss of international status.

This nostalgia is not rooted in a fondness for the ideology of Marxist-Leninism. Instead, Putin regards the disintegration of the Soviet Empire as the demise of “historical Russia” and has spoken of how the 1991 break-up left “tens of millions of our compatriots” living beyond the borders of the Russian Federation. As the former Soviet republic with the deepest ties to Russia and the largest ethnic Russian population, independent Ukraine has come to embody this sense of historical injustice.

Putin’s efforts to “return” Ukrainian land to Russia did not begin with the invasion of February 24. The current campaign of imperial conquest actually started eight years earlier with the Russian takeover of Ukraine’s Crimean peninsula, which Putin seized in a lightning military operation that took advantage of political paralysis in Kyiv in the immediate aftermath of the 2014 Euromaidan Revolution.

Following his success in Crimea, Putin then attempted to partition mainland Ukraine by instigating pro-Kremlin uprisings throughout the south and east of the country. This initiative fell flat after Kremlin agents ran into stronger than expected local opposition from Russian-speaking Ukrainian patriots, leaving Putin’s proxies in possession of a relatively small foothold in eastern Ukraine’s Donbas region.

Control over Crimea and the Donbas allowed Putin to keep Ukraine destabilized, but his true objective has always been the reestablishment of complete Russian control over the whole country. After eight years of geopolitical pressure and hybrid warfare failed to achieve the desired outcome, and sensing that Ukraine was now in danger of moving irreparably out of the Russian orbit, Putin made the fateful decision in early 2022 to launch a full-scale invasion.

By abandoning all pretense and comparing himself to Peter the Great, Putin has now confirmed that he is waging an old-fashioned imperial war of conquest with the goal of annexing Ukrainian territory. Recent statements from Kremlin officials have also made these imperial intentions explicit. During a visit to southern Ukraine’s Russian-occupied Kherson region in early May, Russian Senator Andrei Turchak declared that the current Russian presence in the region would be permanent. “Russia is here forever,” he stated. “There should be no doubt about this. There will be no return to the past.”

This openly imperialistic agenda represents an unprecedented challenge to international law and poses a grave threat to the entire post-WWII global security system. It also exposes the absurdity of appeals to appease Moscow or accept some kind of negotiated settlement that would avoid “humiliating” Russia. There can be no compromise with the Kremlin as long as Putin continues to deny Ukraine’s right to exist and declares his intention to annex entire regions of the country.

If Putin is not decisively defeated in Ukraine, he will surely go further in his mission to “return” lost Russian lands. The list of former Russian imperial possessions that could potentially become targets is extensive and includes Finland, the Baltic States, Poland, Belarus, Moldova, Georgia, Armenia, Azerbaijan, and the nations of Central Asia. Nor can future Russian attacks on the former Warsaw Pact countries of Central Europe be entirely ruled out. If this sounds far-fetched, it is important to remember that almost nobody in Ukraine believed a Russian invasion was even remotely possible until it actually happened.

Today’s brutal colonial war in Ukraine is a reminder that unlike the other great European empires of the nineteenth and twentieth centuries, Russia never underwent a period of de-imperialization. Despite collapsing spectacularly in both 1917 and 1991, Russia’s imperial identity is still very much intact and has become a central pillar of the Putin regime. Until Russia enters the modern era and becomes a post-imperial power, peace in Europe will remain elusive. The best way to speed up this process is to ensure Ukraine wins the war.