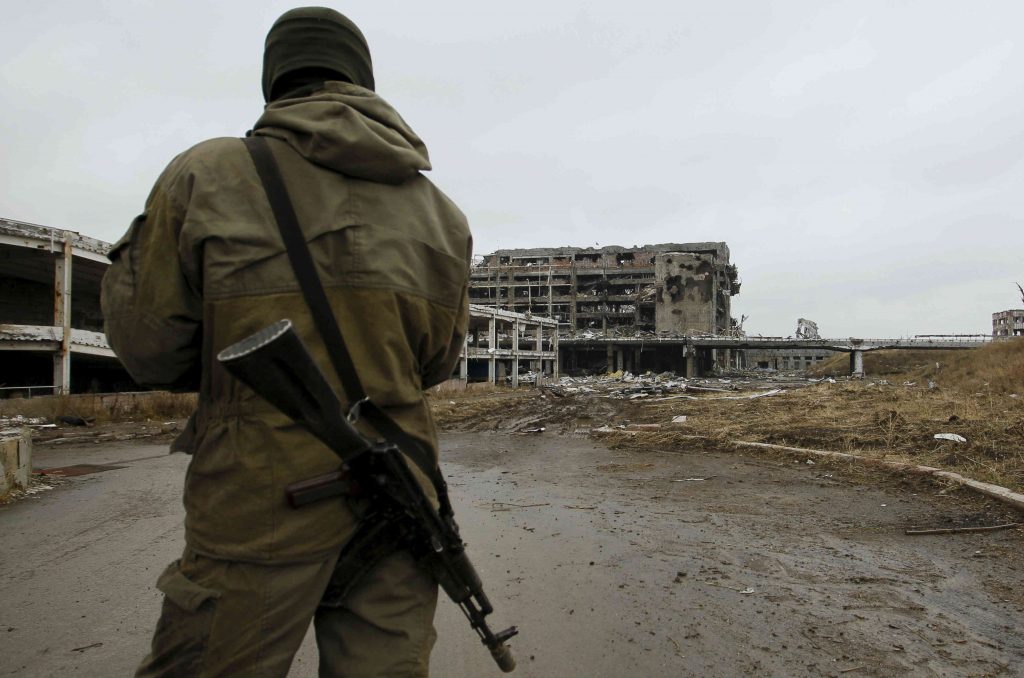 A member of the self-proclaimed Donetsk People's Republic forces stands near buildings destroyed during battles with the Ukrainian armed forces, at the Donetsk airport, Ukraine November 20, 2015. Credit: REUTERS/Alexander Ermochenko

A month and a half ago, while traveling along the frontlines of eastern Ukraine, I predicted that the Minsk II ceasefire agreements would not be respected by the Kremlin and its puppet Peoples’ Republics. It was clear to me—in spite of a tentative ceasefire put in place on October 2—that the situation in the Donbas would continue to deteriorate.

Unfortunately, my projections were right. Fighting has flared up again. Over the last three weeks, Ukrainian field commanders, humanitarian volunteers, and local journalists told me that the Russia-backed fighters have been engaging in provocative shootings from mortars, heavy machine guns, automatic weapons, and snipers, and that these have become a regular occurrence along the entire frontline. On several occasions, the separatists have even brazenly launched full-fledged frontal assaults on Ukrainian positions. Saboteurs have crossed into territory controlled by Ukrainian forces to place anti-personnel mines. Reconnaissance groups and drones have become regular features, collecting tactical information. The Kremlin continues to provide large quantities of weapons, ammunition, equipment, and supplies to the separatists, while Russian military specialists are training the so-called rebels and mercenaries, thus transforming these rag-tag formations into a regular fighting force. Consequently, Ukrainian casualties are mounting and their frequency is rising.

Russian President Vladimir Putin has no intention of releasing the Donbas from his grasp. Instead, he is attempting to freeze the conflict indefinitely in order to exert pressure on Kyiv and the West, while keeping open the possibility to advance further at any point in time. The Kremlin’s rationale behind its recent escalation on the frontlines is to achieve a frozen conflict by gradually sabotaging the execution of the Minsk II agreements without triggering more Western sanctions.

The tragic events in Paris and the intensification of the West’s fight against ISIS put a new spin on the Russian-Ukrainian conflict. The West, especially France, whose President François Hollande is scheduled to travel to Moscow on November 26, needs Russia’s cooperation against ISIS and Syrian President Bashar Assad. Western leaders are asking Putin to agree to a formula, where Assad could be removed from power, thus hopefully halting the country’s five-year civil war. They are also calling for the Russian military to stop attacking the pro-Western Syrian rebels, and to focus on fighting ISIS instead. Putin seems to be open to considering these options. However, he will undoubtedly expect something in return. The Kremlin wants the West to recognize Crimea as part of Russia (if not de jure, then at least de facto), and accept the frozen conflict in the Donbas. They also want the West to drop its economic sanctions, reinstate Russia’s membership in the G-8, and return to business as usual. Following the G-20 summit in Antalya, Turkey, on November 15 and 16, some Western leaders were quick to remark that while they want Russia’s support and cooperation in the Middle East, they have no intention to make compromises on Ukraine. This, however, begs the question: If Ukraine is not going to be used as a bargaining chip to gain Putin’s support in the Middle East, what will? Western leaders cannot expect the Russian President to make significant concessions while receiving nothing in return.

Eastern European leaders have been clear-eyed about the risk of cooperating with Putin. “The fight against terrorists and resolving the Syrian conflict should not take place at the expense of Ukraine,” Edgars Rinkēvičs, Latvia’s foreign minister, warned. Lithuanian President Dalia Grybauskaitė stated that “Lithuania won’t join any new coalitions that include Russia or that Russia wants to be part of.” Estonian President Toomas Hendrik echoed her comments. The three Baltic countries, previously occupied by Russia and now neighbors, can appreciate the real danger that is being projected by the Kremlin.

While the fight against ISIS is of paramount importance, Russia remains the West’s number one threat, as the chairman of the US Joint Chiefs of Staff General Joseph Dunford, testified earlier this year. After all, Russia, unlike ISIS, possesses enormous offensive military capabilities, both nuclear and conventional. Putin has proven beyond any doubt that he, like ISIS, is prepared to destabilize the world order regardless of casualties, or political and economic consequences to reach his strategic goals. Coordinating the West’s military actions in Syria with Russia is important, but not at any price. Ukraine remains the only real force standing between the Russian aggressors and the security and stability of Europe. Western leaders need to find wisdom and strength to adopt a far-sighted strategy for the free world’s security and stability. This, among other things, means not treating Ukraine as a bargaining chip for Putin’s short-term cooperation in the Middle East.

Ihor Kozak is an independent defense and security expert. He advises legislative bodies, governments, think tanks, and media in Canada, the United States, and Ukraine on the Russia-Ukraine conflict. He is a retired Canadian military officer.